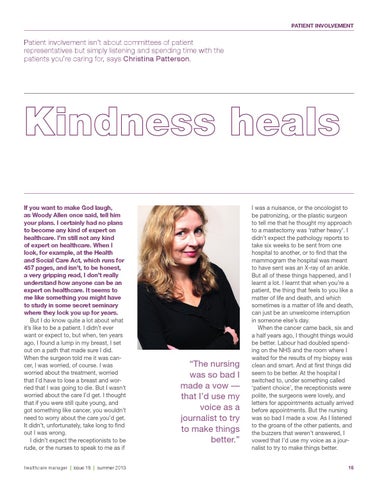 Patient involvement isn’t about committees of patient representatives but simply listening and spending time with the patients you’re caring for, says Christina Patterson.

But I do know quite a lot about what it’s like to be a patient. I didn’t ever want or expect to, but when, ten years ago, I found a lump in my breast, I set out on a path that made sure I did. When the surgeon told me it was cancer, I was worried, of course. I was worried about the treatment, worried that I’d have to lose a breast and worried that I was going to die. But I wasn’t worried about the care I’d get. I thought that if you were still quite young, and got something like cancer, you wouldn’t need to worry about the care you’d get. It didn’t, unfortunately, take long to find out I was wrong. I didn’t expect the receptionists to be rude, or the nurses to speak to me as if healthcare manager | issue 18 | summer 2013

“The nursing was so bad I made a vow — that I’d use my voice as a journalist to try to make things better.”

I was a nuisance, or the oncologist to be patronizing, or the plastic surgeon to tell me that he thought my approach to a mastectomy was ‘rather heavy’. I didn’t expect the pathology reports to take six weeks to be sent from one hospital to another, or to find that the mammogram the hospital was meant to have sent was an X-ray of an ankle. But all of these things happened, and I learnt a lot. I learnt that when you’re a patient, the thing that feels to you like a matter of life and death, and which sometimes is a matter of life and death, can just be an unwelcome interruption in someone else’s day. When the cancer came back, six and a half years ago, I thought things would be better. Labour had doubled spending on the NHS and the room where I waited for the results of my biopsy was clean and smart. And at first things did seem to be better. At the hospital I switched to, under something called ‘patient choice’, the receptionists were polite, the surgeons were lovely, and letters for appointments actually arrived before appointments. But the nursing was so bad I made a vow. As I listened to the groans of the other patients, and the buzzers that weren’t answered, I vowed that I’d use my voice as a journalist to try to make things better. 15 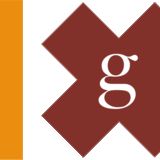