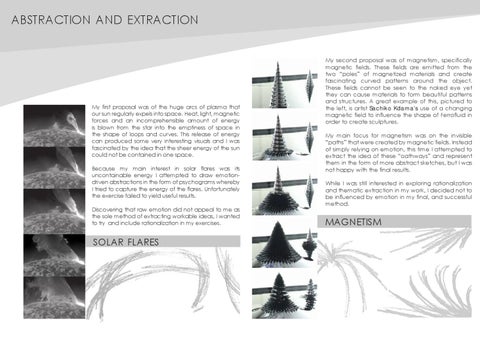 Because my main interest in solar flares was its uncontainable energy I attempted to draw emotiondriven abstractions in the form of psychograms whereby I tried to capture the energy of the flares. Unfortunately the exercise failed to yield useful results. Discovering that raw emotion did not appeal to me as the sole method of extracting workable ideas, I wanted to try and include rationalization in my exercises.

My second proposal was of magnetism, specifically magnetic fields. These fields are emitted from the two “poles” of magnetized materials and create fascinating curved patterns around the object. These fields cannot be seen to the naked eye yet they can cause materials to form beautiful patterns and structures. A great example of this, pictured to the left, is artist Sachiko Kdama’s use of a changing magnetic field to influence the shape of Ferrofluid in order to create sculptures. My main focus for magnetism was on the invisible “paths” that were created by magnetic fields. Instead of simply relying on emotion, this time I attempted to extract the idea of these “oathways” and represent them in the form of more abstract sketches, but I was not happy with the final results. While I was still interested in exploring rationalization and thematic extraction in my work, I decided not to be influenced by emotion in my final, and successful method.

Water droplets demonstrate form-holding capabilities as a result of the attraction between the liquid’s molecules. Cohesion prevents the liquid from scattering or deforming due to gravity and other outside forces. Looking at video and photographic imagery of liquids that exhibit strong cohesive properties, I was able to extract two very distinct “parts” or “themes” that could be seperated and analysed individually as completely different, yet utterly cooperative traits of cohesion. The first idea could only be seen in video imagery that depicted interacting droplets of liquid. When two droplets of liquid come into contact with each other, or when a large drop of liquid is broken into several droplets, elastic “connectors” are produced. These “connectors” provided me with my first big theme that I wanted to incorporate into all aspects of my project. The backdrop shows an exaggerated visualization of these forms. The second idea can be seen everywhere. Cohesion gives a liquid the ability to hold itself together and support itself against the effects of gravity and other forces. This results in the well-documented “droplet” form, wherein a collection of the material is held together simply by the attractive forces produced by the material’s molecular make-up. This produced interesting rounded forms, visualized in the backdrop. Form was not my main focus, however. I was more interested in the idea of an entity holding itself together.

My first proposal was of the huge arcs of plasma that our sun regularly expels into space. Heat, light, magnetic forces and an incomprehensible amount of energy is blown from the star into the emptiness of space in the shape of loops and curves. This release of energy can produced some very interesting visuals and I was fascinated by the idea that the sheer energy of the sun could not be contained in one space.

My third and chosen proposal was of the cohesive properties found in liquid. We see it all the time in water, and it shapes our environment in subtle, yet profound ways. What interested me most about this process was the idea that a natural attraction exists within all things of like characteristics, as if these things were meant to stay together. 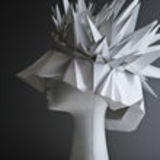