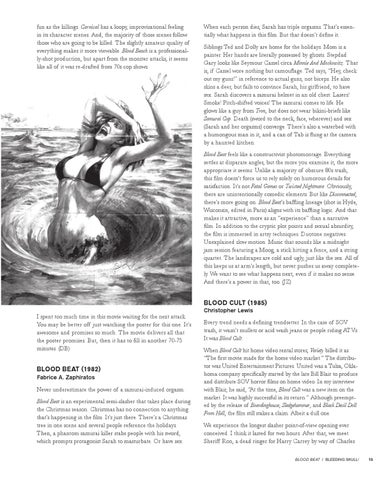 fun as the killings. Carnival has a loopy, improvisational feeling in its character scenes. And, the majority of those scenes follow those who are going to be killed. The slightly amateur quality of everything makes it more viewable. Blood Beach is a professionally-shot production, but apart from the monster attacks, it seems like all of it was re-drafted from 70s cop shows.

When each person dies, Sarah has triple orgasms. That’s essentially what happens in this film. But that doesn’t define it. Siblings Ted and Dolly are home for the holidays. Mom is a painter. Her hands are literally possessed by ghosts. Stepdad Gary looks like Seymour Cassel circa Minnie And Moskowitz. That is, if Cassel wore nothing but camouflage. Ted says, “Hey, check out my guns!” in reference to actual guns, not biceps. He also skins a deer, but fails to convince Sarah, his girlfriend, to have sex. Sarah discovers a samurai helmet in an old chest. Lasers! Smoke! Pitch-shifted voices! The samurai comes to life. He glows like a guy from Tron, but does not wear bikini-briefs like Samurai Cop. Death (sword to the neck, face, wherever) and sex (Sarah and her orgasms) converge. There’s also a waterbed with a humongous man in it, and a can of Tab is flung at the camera by a haunted kitchen. Blood Beat feels like a constructivist photomontage. Everything settles at disparate angles, but the more you examine it, the more appropriate it seems. Unlike a majority of obscure 80s trash, this film doesn’t force us to rely solely on humorous details for satisfaction. It’s not Fatal Games or Twisted Nightmare. Obviously, there are unintentionally comedic elements. But like Disconnected, there’s more going on. Blood Beat’s baffling lineage (shot in Hyde, Wisconsin, edited in Paris) aligns with its baffling logic. And that makes it attractive, more as an “experience” than a narrative film. In addition to the cryptic plot points and sexual absurdity, the film is immersed in artsy techniques. Duotone negatives. Unexplained slow motion. Music that sounds like a midnight jam session featuring a Moog, a stick hitting a fence, and a string quartet. The landscapes are cold and ugly, just like the sex. All of this keeps us at arm’s length, but never pushes us away completely. We want to see what happens next, even if it makes no sense. And there’s a power in that, too. (JZ)

BLOOD CULT (1985) I spent too much time in this movie waiting for the next attack. You may be better off just watching the poster for this one. It’s awesome and promises so much. The movie delivers all that the poster promises. But, then it has to fill in another 70-75 minutes. (DB)

Christopher Lewis Every trend needs a defining trendsetter. In the case of SOV trash, it wasn’t mullets or acid wash jeans or people riding ATVs. It was Blood Cult. When Blood Cult hit home video rental stores, Variety billed it as “The first movie made for the home video market.” The distributor was United Entertainment Pictures. United was a Tulsa, Oklahoma company specifically started by the late Bill Blair to produce and distribute SOV horror films on home video. In my interview with Blair, he said, “At the time, Blood Cult was a new item on the market. It was highly successful in its return.” Although preempted by the release of Boardinghouse, Sledgehammer, and Black Devil Doll From Hell, the film still stakes a claim. Albeit a dull one. We experience the longest slasher point-of-view opening ever conceived. I think it lasted for two hours. After that, we meet Sheriff Ron, a dead ringer for Harry Carrey by way of Charles BLOOD BEAT / BLEEDING SKULL! 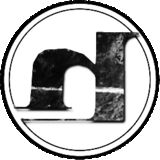