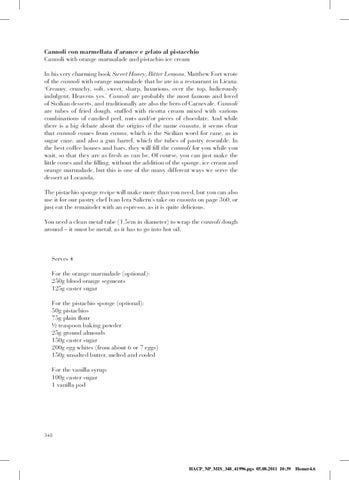 Cannoli con marmellata d’arance e gelato al pistacchio Cannoli with orange marmalade and pistachio ice cream In his very charming book Sweet Honey, Bitter Lemons, Matthew Fort wrote of the cannoli with orange marmalade that he ate in a restaurant in Licata: ‘Creamy, crunchy, soft, sweet, sharp, luxurious, over the top, ludicrously indulgent. Heavens yes.’ Cannoli are probably the most famous and loved of Sicilian desserts, and traditionally are also the hero of Carnevale. Cannoli are tubes of fried dough, stuffed with ricotta cream mixed with various combinations of candied peel, nuts and/or pieces of chocolate. And while there is a big debate about the origins of the name cassata, it seems clear that cannoli comes from canna, which is the Sicilian word for cane, as in sugar cane, and also a gun barrel, which the tubes of pastry resemble. In the best coffee houses and bars, they will ﬁll the cannoli for you while you wait, so that they are as fresh as can be. Of course, you can just make the little cones and the ﬁlling, without the addition of the sponge, ice cream and orange marmalade, but this is one of the many different ways we serve the dessert at Locanda. The pistachio sponge recipe will make more than you need, but you can also use it for our pastry chef Ivan Icra Salicru’s take on cassata on page 360, or just eat the remainder with an espresso, as it is quite delicious. You need a clean metal tube (1.5cm in diameter) to wrap the cannoli dough around – it must be metal, as it has to go into hot oil.

To make the orange marmalade, put the orange segments into a pan with the sugar and cook until the orange breaks down and you have a syrupy marmalade. To make the pistachio sponge, ﬁrst grind the pistachios either using a pestle and mortar, or in a blender. Mix together the ﬂour, baking powder, ground almonds, ground pistachios and sugar. Add the egg whites and then the melted butter and mix together well. Spread in a baking tray and leave to rest overnight in the fridge. Heat the oven to 180°C/350°F/gas 4. Remove the baking tray from the fridge, let the sponge mixture come to room temperature and then bake in the oven for 10–15 minutes, until a sharp knife inserted into the centre comes out clean. Turn out and cool on a wire tray. To make the vanilla syrup, put 100ml of water into a pan with the sugar and vanilla pod. Bring to the boil, stirring to ensure that all the sugar is dissolved, then take off the heat. For the cannoli: put the ﬂour, sugar and fat into a food mixer ﬁtted with a dough hook and mix for 2 minutes on medium speed until the mixture resembles breadcrumbs. Add the egg and mix a little more, then add the Moscato wine and 1 tablespoon of the vanilla syrup and mix until you have a dough. Wrap in clingﬁlm and leave to rest for a couple of hours in the fridge.

When ready to use, roll out the dough to 1mm thick, then cut it into 12 squares, about 7 x 7cm. Wrap one square around the metal tube (see above) and seal in place with a little beaten egg. Heat some vegetable oil in a deep-fat fryer, or ﬁll a large pan one third of the way up with it. When the oil reaches 180°C, with the help of a ﬁsh slice or spider, carefully lower the tube into the hot oil and fry until the cannolo turns pale golden. (If you don’t have a thermometer drop a little ﬂour into the oil and if it starts to sizzle then the oil is hot enough.) Lift out carefully with the ﬁsh slice or spider and drain on kitchen paper. When it has cooled just enough for you to touch it, slide the cannolo off the metal cylinder and wrap the next square around it. Deep-fry as before. Repeat until all the cannoli are done, then set them aside to cool. They need to be completely cold before you ﬁll them. Make the ﬁlling by mixing all the ingredients together. Cut 8 small rounds or squares from the pistachio sponge. To serve, spoon some orange marmalade on to one of 4 small deep plates, and put 2 pieces of pistachio sponge on top, to give a base for the cannoli. Put the ﬁlling into a piping bag, cut the top and use to ﬁll the cannoli. Dust each one with icing sugar and arrange on top of the pieces of sponge. Serve with pistachio ice cream. 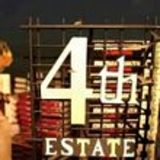 The most famous sicillian dessert, cannoli, served with orange marmalade and pitachio ice cream. This is treat sure to impress any dinner gu...

The most famous sicillian dessert, cannoli, served with orange marmalade and pitachio ice cream. This is treat sure to impress any dinner gu...