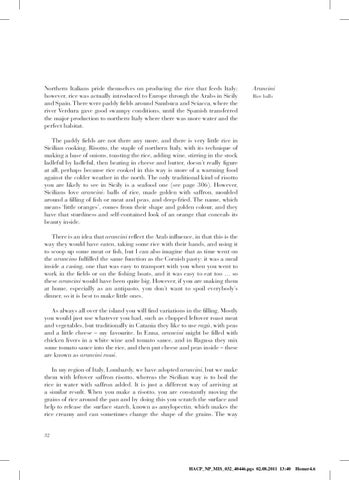 Northern Italians pride themselves on producing the rice that feeds Italy; however, rice was actually introduced to Europe through the Arabs in Sicily and Spain. There were paddy ﬁelds around Sambuca and Sciacca, where the river Verdura gave good swampy conditions, until the Spanish transferred the major production to northern Italy where there was more water and the perfect habitat.

The paddy ﬁelds are not there any more, and there is very little rice in Sicilian cooking. Risotto, the staple of northern Italy, with its technique of making a base of onions, toasting the rice, adding wine, stirring in the stock ladleful by ladleful, then beating in cheese and butter, doesn’t really ﬁgure at all, perhaps because rice cooked in this way is more of a warming food against the colder weather in the north. The only traditional kind of risotto you are likely to see in Sicily is a seafood one (see page 306). However, Sicilians love arancini: balls of rice, made golden with saffron, moulded around a ﬁlling of ﬁsh or meat and peas, and deep-fried. The name, which means ‘little oranges’, comes from their shape and golden colour, and they have that sturdiness and self-contained look of an orange that conceals its beauty inside. There is an idea that arancini reﬂect the Arab inﬂuence, in that this is the way they would have eaten, taking some rice with their hands, and using it to scoop up some meat or ﬁsh, but I can also imagine that as time went on the arancino fulﬁlled the same function as the Cornish pasty: it was a meal inside a casing, one that was easy to transport with you when you went to work in the ﬁelds or on the ﬁshing boats, and it was easy to eat too … so these arancini would have been quite big. However, if you are making them at home, especially as an antipasto, you don’t want to spoil everybody’s dinner, so it is best to make little ones. As always all over the island you will ﬁnd variations in the ﬁlling. Mostly you would just use whatever you had, such as chopped leftover roast meat and vegetables, but traditionally in Catania they like to use ragù, with peas and a little cheese – my favourite. In Enna, arancini might be ﬁlled with chicken livers in a white wine and tomato sauce, and in Ragusa they mix some tomato sauce into the rice, and then put cheese and peas inside – these are known as arancini rossi. In my region of Italy, Lombardy, we have adopted arancini, but we make them with leftover saffron risotto, whereas the Sicilian way is to boil the rice in water with saffron added. It is just a different way of arriving at a similar result. When you make a risotto, you are constantly moving the grains of rice around the pan and by doing this you scratch the surface and help to release the surface starch, known as amylopectin, which makes the rice creamy and can sometimes change the shape of the grains. The way

the Sicilians do it, the starch stays inside a bit more, and the rice retains its ‘soul’, its inner shape, but by boiling it in the right quantity of stock or water it will absorb all the liquid as it cools down gently, and by the time it is completely cold it will be very sticky – it is a similar idea to Thai sticky rice, made with jasmine rice. The ‘due zie’, the two aunties in the Planeta family (our friends at the wine and olive oil estate), who are in charge of the cooking for big events, and are really accomplished, very knowledgeable and academic cooks, insist that it takes two days to make good arancini. You must cook the rice and the meat one day, and the rice must cool down naturally and rest for at least twelve hours so that it becomes glutinous. One time when I was at Planeta I asked one of the aunties: ‘What is the right ratio of water to rice?’ She took down the big pan that is always used for arancini and, pointing at it, she said, ‘This much rice, and this much water.’ ‘But have you never tried to weigh it, so you know how much water you need?’ ‘No, why would I?’ she asked. ‘This is the only pan we ever use.’ What is more, sometimes they cook for 600 people when they are entertaining at Planeta, and if they are making arancini, do they use lots of pots? No, the same one, about twenty-ﬁve times! Note: The Sicilian way is to dip the arancini into pastella (batter) before dusting them with breadcrumbs, which gives them a really crunchy outside once they are deep-fried. I know a kilo of breadcrumbs for coating the arancini seems a lot, and you won’t use them all, but you really need a big mound of them in order to roll the arancini in them and get them properly encrusted.

Makes about 10 It’s best to cook the rice the day before you want to use it – once it has cooled, keep it in the fridge. 1.6 litres ﬁsh stock or water 500g arborio rice 5g salt a pinch of good-quality saffron threads (about 15) 60g pecorino cheese, grated about 1kg ﬁne breadcrumbs (see page 45) vegetable oil for deep-frying For the ﬁlling: 5 plum tomatoes 2 tablespoons olive oil 1 garlic clove, ﬁnely chopped ½ medium onion, ﬁnely chopped 225g mixture of small pieces of white ﬁsh (swordﬁsh, if you can ﬁnd it, otherwise cod or haddock), pieces of cleaned squid or cuttleﬁsh, and small prawns (or chopped larger ones) 120ml dry white wine For the pastella: 350g plain ﬂour 1 egg

Bring the stock or water to the boil in a pan, add the rice, salt and saffron, bring back to the boil and cook very slowly for at least 15 minutes, until the rice is tender and the liquid has been absorbed. Remove from the heat, leave to rest for a minute, then quickly beat in the pecorino. Set aside to cool completely. Prepare the ﬁlling: put the tomatoes into a pan of boiling water for 10 seconds, then drain them under cold water and you should be able to peel them easily. Cut them in half, scoop out the seeds with a teaspoon, and chop the ﬂesh. Heat the olive oil in a large pan and cook the garlic and onion gently, until softened but not coloured. Add the seafood – the pieces of ﬁsh ﬁrst, then the squid and lastly the prawns. Stir until the prawns change colour. Pour in the white wine and bubble up to let the alcohol evaporate, then add the tomatoes and cook for about 5 minutes. The mixture should be soft but not

soupy. If it is a bit too liquid, cook for a little longer, to reduce and thicken it. Remove from the heat, then crush the ﬁsh lightly with a fork. Leave to cool. To make the pastella, beat the ﬂour, egg and water in a bowl. Have ready the breadcrumbs in a separate shallow bowl. Wet your hands to stop the rice from sticking, then take a tangerine-sized ball of rice mixture and press your thumb in the centre to make a hollow. Spoon in a little of the seafood ﬁlling, then close the rice around it and form it into a ball. Dip each one into the pastella and then into the breadcrumbs, making sure they are completely covered in crumbs and pressing them lightly, to make sure the crumbs cling. Heat around 8cm of vegetable oil in a large pan, making sure the oil doesn’t come any higher than a third of the way up the pan. The oil must be hot, but not smoking, before you add the arancini (if you have a thermometer it should be around 170°C, otherwise test it by putting in a few breadcrumbs – if they sizzle gently the oil is ready). Working in batches (being careful not to crowd the pan or you will lower the temperature of the oil), fry the arancini for about 4–5 minutes, moving them around until they are golden all over. Drain well on kitchen paper and serve hot.

Delicious sicillian rice balls with a seafood filling, from Giorgio Locatelli's new cookbook 'Made in Sicily'

Delicious sicillian rice balls with a seafood filling, from Giorgio Locatelli's new cookbook 'Made in Sicily'