Read to Dream Newsletter no. 1 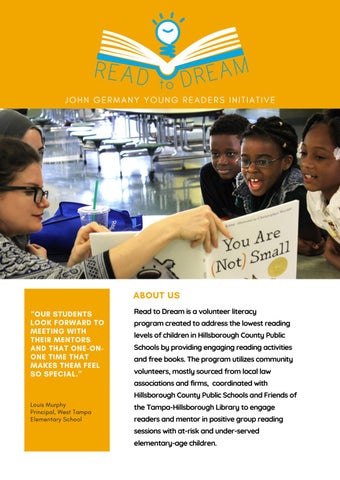 ABOUT US “OUR STUDENTS LOOK FORWARD TO MEETING WITH THEIR MENTORS AND THAT ONE-ONONE TIME THAT MAKES THEM FEEL SO SPECIAL.”

the Tampa-Hillsborough Library to engage readers and mentor in positive group reading sessions with at-risk and under-served elementary-age children.

IMPACTING OUR SCHOOLS Literacy is the antidote to poverty. -Dr. Doug Fisher

Hillsborough County Schools have been so blessed to partner with the Read to Dream program and the Hillsborough County Bar Association to provide direct support to the students at: BC Graham Elementary, Broward Elementary, BT Washington Elementary, Edison Elementary, Just Elementary, and West Tampa Elementary Schools. Through the dedicated efforts of the attorneys in the Read to Dream program, students have the incredible opportunity to experience, firsthand, the power of literacy to change their lives. The attorneys not only read with the children, but they also engage in conversations that build students’ vocabulary, comprehension, and overall listening and speaking skills. These literacy skills are critical to the success of all of our children as they prepare for a productive life! Additionally, the attorneys also serve as mentors, encouraging children to make positive choices and give their best efforts throughout the school day and at home. Of the six elementary schools that participated in the Read to Dream program starting in the 2016-2017 school year, 66% of the schools demonstrated improvement in the FLDOE State Grading system. Additionally, West Tampa Elementary maintained its C grade. Another important component of the Read to Dream program is that children are able to select books to read and keep at home! The power of choice is an important motivator in promoting reading for children. Furthermore, the majority of children participating in the program don’t have access to books at home. The gift of books helps to plant the seed of reading for all of the children in the home. The schools and students in the Read to Dream program have been so blessed by the active support of the volunteers in the program. Thank you for making such INTERESTED IN a significant difference in the lives of our children. VOLUNTEERING?

If you or your organization is interested in being a volunteer reader or putting together a team of readers, please contact the Read to Dream Program Coordinator, Melissa Foss, at melissa.foss@yahoo.com.

FROM THE HILLSBOROUGH COUNTY BAR ASSOCIATION THE FOLLOWING ARE EXCERPTS FROM ARTICLES BY KEVIN MCLAUGHLIN ORIGINALLY PUBLISHED IN THE HCBA’S LAWYER MAGAZINE DURING THE FIRST YEAR OF THE PROGRAM.

&quot;Read to Dream: The Young Readers Initiative&quot; September 2016 One of things that makes being a lawyer so interesting is the wide variety of characters and personalities you encounter. Lawyers come from all walks of life with diverse genders, races, religious beliefs, political views and educational backgrounds. However, if I had to identify one unifying trait common to most lawyers, it would be a love and respect for the written word. After all, the supreme law of land in the United States of America is our written Constitution and our entire body of common law is based on prior written decisions. Perhaps more than anything else, it is our love of reading that unites us and draws us to this noble profession. late John Germany was a lawyer who The knew the value of reading and the importance of instilling this value in children at a young age. Thanks to the vision and generosity of Mr. Germany, the HCBA is proudly partnering with the Hillsborough County Public Library, Hillsborough County Schools and the Germany family in an exciting new initiative to foster a love of reading in elementary school children. The program is called “Read to Dream” and was born out of the simple gesture of someone giving Mr. Germany a book he could call his very own when he was a small child. Mr. Germany wanted to pass along his love of reading to a new generation of kids, especially the poor and disadvantaged.

Mr. Germany set aside money in his will for this very purpose. His vision was that lawyers would go to elementary schools and spend time simply reading to children and that each child, like the young John Germany, would receive books of their very own.

Volunteers will spend half an hour to forty-five minutes each week reading to and interacting with the children at Just Elementary, Booker T. Washington, and West Tampa Elementary during two eight week sessions. These schools were chosen because 99% of the students are living below the poverty level and they are struggling with reading aptitude as compared to students at other schools. These children go to schools right in our backyard, but are swimming upstream due to circumstances entirely beyond their control.

The genius of this program is that we have the rare opportunity to make a lifelong, positive impact on a child’s life by giving just a little bit of our time once a week. We have had a tremendous outpouring of support from local law firms and other voluntary bar associations, but our goal is to not only sustain the program, but to expand it to other schools with children in need.

&quot;A Dream Come True: The Young Readers Initiative&quot; July 2017 The program began at Booker T. Washington, Just Elementary, and West Tampa Elementary. The children selected to participate in the program were specifically targeted due to the high risk of falling behind their classmates in reading ability. By the spring semester, the scope of the program was doubled when it expanded to include Broward Elementary, Graham Elementary, and Edison Elementary.

The idea for Read to Dream was simple: Start a program whereby lawyers would spend about an hour a week simply reading to elementary school children. The hope was that exposure to literature would spark a lifelong love of reading. Studies have shown that children who read regularly do better in school, go on to work in higher paying jobs, and are generally more productive citizens. The program featured an eight week session in the fall and a second eight week session in the spring. I am happy to report that the program met and exceeded expectations by every measure. While the HCBA enthusiastically participated in and supported the program, the real credit for the success of the program goes to Mr. Germany’s daughters, Lindsay Robbins and Jan Gruetzmacher; his son-in-law, Jim Robbins of Hill Ward Henderson; and his longtime friend, Leonard Gilbert of Holland &amp; Knight. Working in partnership with Lorie Tonti of the TampaHillsborough County Public Library and the Hillsborough County Public Schools, these individuals created the program from the ground up and worked tirelessly to make Mr. Germany’s dream a reality.

I was truly moved by the enthusiastic support from the members of the HCBA. This program could not have worked if lawyers were not willing to put their busy lives and practices on hold for the betterment of others. Mr. Germany knew that if he could show us the way to make a change in a child’s life, there would be no shortage of volunteers from the legal community, and, as usual, he was right. The children were encouraged not only to read their new books on their own, but also to read with their parents, siblings and friends with the hope that our young readers will themselves pay it forward by fostering and encouraging a love of reading in others. I had the pleasure of seeing firsthand how Mr. Germany’s dream is being realized, even now, he is changing lives and we all owe him a debt of gratitude for daring to dream.

VOLUNTEER SPOTLIGHT The Read to Dream Program is grateful for the support and assistance of all of our teams of volunteer readers past and present: HILLSBOROUGH COUNTY BAR ASSOCIATION HOLLAND &amp; KNIGHT HILL WARD HENDERSON TRENAM LAW TAMPA HISPANIC BAR ASSOCIATION

or visit us on the web at ReadToDream.org/donate

This award honors outstanding volunteers and programs that go beyond the call of duty through their philanthropic efforts.

This award recognizes Mr. Leonard Gilbert of Holland and Knight and the John Germany Young Readers Initiative co-chair for his accomplishments as a literacy leader.

Read to Dream Newsletter no. 1 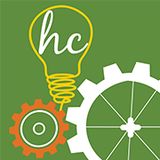