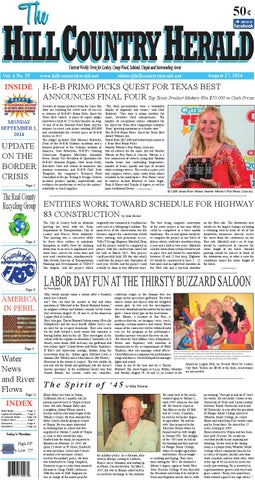 “The final presentations were a wonderful display of ingenuity and vision,” said Chef Skibitcky. “Our state is prime territory for smart, inventive food entrepreneurs. The number of exceptional entries submitted for the Quest for Texas Best competition solidifies Texas’ growing reputation as a foodie state.” The H-E-B Primo Picks: Quest for Texas Best Award Winners Are: Grand Prize ($25,000 and featured placement as a Texas Best Primo Pick): Nanette Watson’s Frio Farms (Concan) Not all extracts are the same- just ask Nanette Watson of Frio Farm in Concan. Watson is a true connoisseur of extracts, using only Tahitian vanilla beans and controlling temperature, number of beans, quality and type of alcohol when creating extracts. The result is a pure, rich and complex extract, miles away from others available in the marketplace. Frio Farms’ array of extracts include Bourbon &amp; Cane Sugar, Rum &amp; Honey and Tequila &amp; Agave, as well as more traditional flavors. continued page 2

The City of Leakey held an informal meeting last week with the Texas Department of Transportation, City of Leakey and Nueces River Authority. This meeting was a concerted effort by these three entities to minimize disruption in traffic flow by utilizing down time in an area to implement new water lines, sleeves for sewer lines and new road construction, simultaneously. John Dewitt, Director of Transportation Planning and Development at TXDOT San Angelo, said the project which

originally was estimated at 4 million has now risen to a whopping 6 million. The main focus of the conversation was the business impact the construction would have, parking, and pedestrian access. TxDoT Design Engineer Marshall Heap said the project would be completed in phases, with the construction slated out for bids in March 2015. This process could possibly hold 180 day stay which could take the project into September of next year. Dewitt said the project could actually be done in two different ways.

The first being complete renovation of the entire project at one time which could be completed in a three month timeframe. The second option would be to complete the project in one block of phases which could take anywhere from a year and a half to two years. Marshall said the storm drain system would be put in place first and would be somewhere between 10 and 12 feet deep. Highway 83 would be constructed to have 2 - 12 foot lanes and an eight-foot shoulder on the West side and a ten-foot shoulder

on the East side. The downtown area would see the largest changes including a retaining wall in front of all of the downtown businesses directly across the street from the courthouse on the East side. Marshall said a set of steps would be constructed of concrete the entire length of the block. Parallel parking would be placed in front of the downtown area, at what is now the courthouse annex the entire length of the block. continued page 2

Why would anyone name a saloon after a buzzard, much less a thirsty one? You can find the answer to that and other questions at “Mischief at the Thirsty Buzzard Saloon,” an original cowboy and Indians comedy set for Labor Day weekend, August 29, 30 and 31, at the American Legion Hall in Leakey. Here’s the gist: Thirsty Buzzard Saloon owner (Priscilla Kirkpatrick) and the local sheriff (Blyth Cave)—are on alert for an escaped desperado. They also search for the truth behind a nasty rumor that someone is buying Indian land on the sly. They investigate in the saloon with the regulars in attendance: bartender (A.G Hood), town drunk (Bill Jackson), his girlfriend and two saloon “girls” (Linda Power and Helen Stephens). If that’s not distraction enough, Indians from the reservation drop by-- Indian agent (Richard Low), a shaman (Pat Walzel) and a tribal dancer (Pat Power). Everyone in the saloon is suspect. The two sleuths do not rule out the drunk and girlfriend, but she doesn’t answer questions. In the traditional wacky way that Donna Blazek, the creator, crafts her comedies,

confusion reigns as the shaman tries her magic on the speechless girlfriend. The tribal dancer chants and dances with the delighted saloon girls. In two acts the investigators discover whodunit and the motive for the land grab— black sticky goo on the reservation. Mrs. Blazek, a resident of Rio Frio, is producer-director, set designer, voice coach, makeup, costume mistress and caterer. Weird names of the characters will be withheld until you see the program at the performance. Another mystery you must discover on site. The Groovin’ Gals (Mdms. Cave, Kirkpatrick, Power and Stephens) will entertain at intermission to the accompaniment of Eddy Stephens, who also manages sound effects. WILD AND WACKY CHARACTERS meet at the Thirsty Buzzard Saloon. L-R are tribal dancer Carol Morrison accompanies the performance Pat Power and saloon girls Linda Power and Helen Stephens. The action starts at 8 p.m Friday through Sunday, August 29-31, at American Legion Hall, Leakey. “Mischief at the Thirsty songs and dances. David Kirkpatrick manages Buzzard Saloon” is a Frio Canyon Players original melodrama by Donna Blazek. lights and sound. American Legion Hall, on Second Street by Leakey Come in out of the heat and try a Thirsty Buzzard. The show begins at 8 p.m. Friday, Saturday City Hall. Tickets are $8.00 at the door; reservations and Sunday, August 29, 30 and 31, in Leakey at the are not needed.

The Spirit of ‘45 Ernen Haby was born in Selma, California, but at 2 months old, his parents moved back to Utopia to their roots. His dad, Tommy Haby, and a neighbor, Adam Wilson, hired a teacher and his education began at the Wilson’s school. He then attended the Haby school, finally going to school at Utopia. He was more interested in working than in school and was employed at Station C, north of Utopia as soon as they would hire him. Drafted into the Army, he reported to Bandera on February 13, 1942. He spent 13 weeks at Ft. Knox, Kentucky at tank mechanic school and 9 weeks at motorcycle mechanic school, used by the military police. He then was transferred to Camp Campbell, Kentucky to go as cadre form armored division to Camp Chaffe, Arkansas. With the rank of Staff Sargeant, he was in charge of the motor pool for

the military police. As a division, they went to Europe, sailing to LaHavre, France, on to Germany, and ending up in Pilson, Czechoslovakia. On May 8, 1945, the war in Europe ended and he received his discharge in San Antonio.

He came back to the ranch, worked again at Station C, until 1949, when he was laid off. He went to school at San Marcos on the GI Bill and in 2 years, 9 months, he had his bachelors degree in agriculture. He and his wife Gracia moved to the Kinchloe Prairie where he farmed and his wife taught at Sabinal ISD. The drought of the ‘50’s took its toll on his farming and they moved to Ranger Junior College, where he taught agriculture and history; Gracia taught accounting and typing. They were there during the ‘60’s. He obtained a Master’s degree, again at South West State Teachers College. It was then that the President asked him if he would be Dean and Registrar and he did so, with

no training. “Just get in and do it” were his words. He also holds 3 hours at the University of Texas and 3 hours jointly between Trinity University and A and M University. A year after the president of Ranger Junior College moved to Wharton Junior College, he called Ernen and asked him if he would come and be Dean there. He stayed for 17 years, retiring in 1984. Ernen returned to Utopia and has been here now 30 years. He credits his excellent health to not smoking nor drinking. On the wall in the dining room is a plaque from Wharton Junior College which commends him for his accuracy of reports, loyalty, non-time work schedule, and his work ethic. Now at the age of 96, he feels he never has really quit working. He is involved in experimentative grasses and weed and grass control. “Keep your mind busy; work toward a goal is his sage advice.”