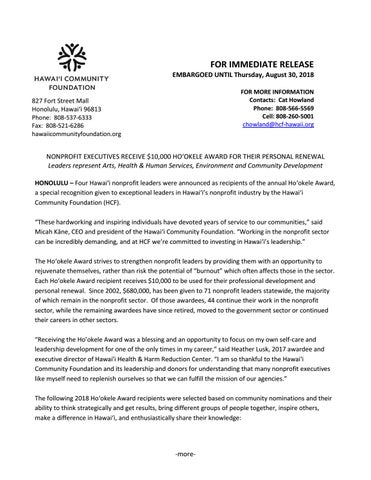 NONPROFIT EXECUTIVES RECEIVE $10,000 HO‘OKELE AWARD FOR THEIR PERSONAL RENEWAL Leaders represent Arts, Health & Human Services, Environment and Community Development HONOLULU – Four Hawai‘i nonprofit leaders were announced as recipients of the annual Ho‘okele Award, a special recognition given to exceptional leaders in Hawai‘i’s nonprofit industry by the Hawai‘i Community Foundation (HCF). “These hardworking and inspiring individuals have devoted years of service to our communities,” said Micah Kāne, CEO and president of the Hawai‘i Community Foundation. “Working in the nonprofit sector can be incredibly demanding, and at HCF we’re committed to investing in Hawai‘i’s leadership.” The Ho‘okele Award strives to strengthen nonprofit leaders by providing them with an opportunity to rejuvenate themselves, rather than risk the potential of “burnout” which often affects those in the sector. Each Ho‘okele Award recipient receives $10,000 to be used for their professional development and personal renewal. Since 2002, $680,000, has been given to 71 nonprofit leaders statewide, the majority of which remain in the nonprofit sector. Of those awardees, 44 continue their work in the nonprofit sector, while the remaining awardees have since retired, moved to the government sector or continued their careers in other sectors. “Receiving the Ho’okele Award was a blessing and an opportunity to focus on my own self-care and leadership development for one of the only times in my career,” said Heather Lusk, 2017 awardee and executive director of Hawai'i Health & Harm Reduction Center. “I am so thankful to the Hawai‘i Community Foundation and its leadership and donors for understanding that many nonprofit executives like myself need to replenish ourselves so that we can fulfill the mission of our agencies.” The following 2018 Ho‘okele Award recipients were selected based on community nominations and their ability to think strategically and get results, bring different groups of people together, inspire others, make a difference in Hawai‘i, and enthusiastically share their knowledge:

NONPROFIT EXECUTIVES RECEIVE $10,000 HO‘OKELE AWARD FOR THEIR PERSONAL RENEWAL Add 1 Jan M. Harada, President & CEO, Helping Hands Hawai‘i Jan’s long-term practice of martial arts, lion dancing and Qigong is influential to her ability to successfully manage and lead as president & CEO of Helping Hands Hawai‘i. The health and human services nonprofit she oversees helps thousands of individuals and households across the state every year in their struggles with poverty, homelessness, mental illness, addiction, and language barriers.On top of her responsibilities at Helping Hands Hawai‘i, Jan also serves on the boards of the Hawai‘i Alliance of Nonprofit Organizations (HANO), the Henry & Colene Wong Foundation, the Susannah Wesley Community Center, the Hawai‘i Employers Council (HEC), the Island Insurance Company, Ltd. and on the Steering Committee for Honolulu’s 100 Resilient Cities Initiative. Jan is a graduate of Punahou School, the University of Oregon, and the University of Oregon School of Law. Her community service orientation is evident in her participation with the Rotary Club of Honolulu, and as a member of numerous leadership programs including Pacific Century Fellows (2008), Weinberg Fellows (2008), HCF Pono Program (2012), and Omidyar Fellows Program (2013-2014). Angela Hi‘ilei Kawelo, Executive Director, Paepae o He‘eia Hiʻilei grew up in Kailua but considers herself raised in Kahaluʻu through the teachings of her KaweloChing ʻohana at the family compound and in the waters of Kawahaokamanō (Kāneʻohe Bay). A graduate of both Punahou School and UH Mānoa (with a degree in Zoology), Hiʻilei was one of the seven original co-founders of Paepae o Heʻeia in 2001. The grassroots nonprofit was founded to restore the 800year old, 88-acre Heʻeia Fishpond (owned by Kamehameha Schools) and has a mission to educate the community of Hawaiʻi about traditional Hawaiian aquaculture and the ingenuity of our kūpuna while keeping the practice of mahi iʻa (fish cultivation) alive and well. In 2007, Hiʻilei became the organization’s executive director. Hiʻilei has served on the Mana Maoli board and was Fishing Representative and Chair of the Kāneʻohe Bay Regional Council. She continues to serve on the boards of Papahana Kuaola, Hui Ulu Mea ʻAi, Kua ʻĀina Ulu ʻAuamo (KUA), Sea Grant Advisory Board, DLNR’s Natural Area Reserves Commission, and Land Legacy Conservation Commission. Susan Maddox, Executive Team Leader, Friends of the Future Susan has been part of the Hawaiʻi nonprofit sector for more than 40 years. Along the way, she has mentored many individuals in developing their leadership skills and transferred her knowledge of organizational development and operations to emerging leaders and community members. Since joining the Friends of the Future in 1996 as administrator, and then as executive team leader, Susan’s efforts have helped to provide an organizational home and fiscal sponsorship to more than 70 community-based programs and initiatives. Friends of the Future was born out of the vision of Kenneth F.

NONPROFIT EXECUTIVES RECEIVE $10,000 HO‘OKELE AWARD FOR THEIR PERSONAL RENEWAL Add 2 Brown to embrace the future and act today by involving the people of Hawai‘i in finding creative paths to an intentional future. Susan’s past efforts include volunteering for the Hemophilia Foundation of Hawaii, Cystic Fibrosis Foundation, and March of Dimes. She is a former staff member of the Girl Scout Council of Hawai‘i and Hawai‘i Kids at Work and has served on the boards of Five Mountains Hawai’i, Neighborhood Place of Kona, Hawai’i Island Rural Health Association, Na Kalai Wa’a, Rotary Club of North Hawai’i and H.R.A., Inc. In addition to her role with the Friends of the Future, Susan currently volunteers with Holualoa Village ʻOhana. Randy Wong, President, Hawai‘i Youth Symphony Randy has served as executive director of the Hawai‘i Youth Symphony (HYS) since 2012 and was recently promoted to president. Under his leadership, the group’s strategic vision has grown to help all children realize their fullest potential through orchestral music. He launched collaborations with the Hawai‘i Symphony Orchestra and Hawai‘i Public Radio, introduced residencies by world-class musicians, and increased participation among students from neighbor islands and the Pacific Rim. A musician himself, Randy is a bassist in the Hawai‘i Symphony Orchestra and an alumnus of HYS. He graduated from Harvard University and New England Conservatory and is a strong advocate for the essential role that music plays in empowering children with the joy and skills that ensue from learning and appreciating music. Randy serves as a volunteer on the board of the League of American Orchestras’ Youth Orchestra Division and the leadership team of Hawai‘i Public Radio’s Generation Listen. The 2018 Ho‘okele Award is supported by The Kelvin Taketa Ho‘okele Leadership Award Fund which was established in 2017 to honor Taketa’s leadership during his tenure as CEO and president at HCF and to ensure that the Ho‘okele Award will be bestowed in perpetuity. About Hawai‘i Community Foundation With over 100 years of community service, the Hawai‘i Community Foundation (HCF) is the leading philanthropic institution in the state. HCF is a steward of more than 850 funds, including more than 250 scholarship funds, created by donors who desire to transform lives and improve communities. In 2017, HCF distributed more than $59 million in grants and contracts statewide, including more than $6 million in scholarships. HCF also serves as a resource on community issues and trends in the nonprofit sector. ###