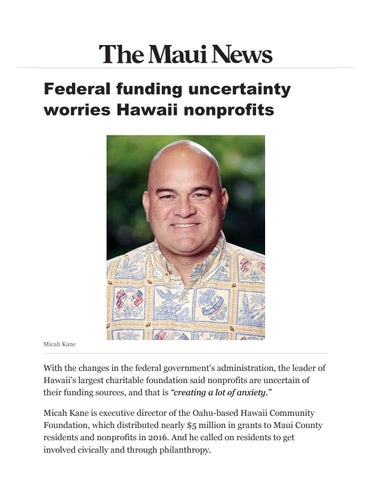 With the changes in the federal government’s administration, the leader of Hawaii’s largest charitable foundation said nonprofits are uncertain of their funding sources, and that is “creating a lot of anxiety.” Micah Kane is executive director of the Oahu-based Hawaii Community Foundation, which distributed nearly $5 million in grants to Maui County residents and nonprofits in 2016. And he called on residents to get involved civically and through philanthropy.

Named as foundation head in July, Kane said he knows the funding gap “is so big that it is not possible” for philanthropists to fill all the community’s needs. But donations can go where the need is greatest. The funding gap comes as President Donald Trump threatens to cut funding for many federal programs, and that is expected to have a trickledown effect on local programs statewide. “We are going to need to step up in all facets of our life to be more civically engaged and informed,” Kane said. This week, Kane is on Maui to meet with nonprofits, community and government leaders and he’s learning more about Maui County, where residents have shown a willingness to give and lend a hand. Kane is the former chairman of the Hawaiian Homes Commission and head of the Department of Hawaiian Home Lands. A 2015 foundation study showed that in 2014 Maui County residents topped the state in giving per household at nearly 97 percent. Donations included cash, goods and volunteer work. Statewide, the giving average was 93.3 percent. The polling included a sample of 200 households in Maui County. Kane said the foundation’s study did not delve into why Maui County residents have led the state in giving. With such donations, the foundation has helped disperse millions to Maui County residents and the state. The organization celebrated is centennial last year. And, in 2016, around $500,000 was given out in scholarships to 135 Maui County students. The foundation awarded $3.8 million in grants in Maui County. Annually, the foundation distributes more than $47 million to support improvements in the state, its website reports.

Besides administering grants and funds, the foundation does other community work. For example, it held its Hawaii Community Foundation Advancing Nonprofit Excellence convention last month on Oahu where the foundation gathered around 200 nonprofits and several hundred people to discuss the nonprofit funding climate given the Trump administration. At the convention, Kane announced plans to create a Hawaii State Budget and Policy Center to gather feedback to guide policy decisions. The center would be a tool to look at the impacts of federal and state policies. It would be the 43rd center in the United States. As for pressing issues for Maui County nonprofits, Kane said those are led by the need for housing and the countyâ&#x20AC;&#x2122;s high cost of living. The foundation aims to address those with its Housing-ASAP three-year program, which began in 2014. Its goal is to move more families quickly into stable housing. Kane estimated that in three years the program on Maui saw a 46 percent decrease in homeless families. According to foundationâ&#x20AC;&#x2122;s website, eight organizations, including the Family Life Center in Kahului, were selected to participate in providing a critical mass of services to help transition families into stable housing. A pool of donors from the business and private community put together $4 million for HousingASAP program. * Melissa Tanji can be reached at mtanji@mauinews.com.

Editorial Letters to the Editor Columns