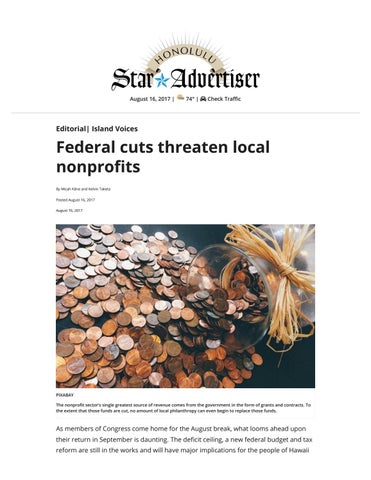 PIXABAY The nonproﬁt sector’s single greatest source of revenue comes from the government in the form of grants and contracts. To the extent that those funds are cut, no amount of local philanthropy can even begin to replace those funds.

As members of Congress come home for the August break, what looms ahead upon their return in September is daunting. The deﬁcit ceiling, a new federal budget and tax reform are still in the works and will have major implications for the people of Hawaii

and the fabric of our society. It is diﬃcult to predict what will emerge, but now is the time when community advocates and nonproﬁt leaders need to make their voices heard. The potential impact to the nonproﬁt and charitable sector is signiﬁcant. For example, proposed cuts in the president’s budget to discretionary spending would defund the Corporation for National and Community Services, Legal Services Corporation, the National Endowment of the Arts, the Corporation for Public Broadcasting, and the Community Development Block Grants program, among many others. This would mean the end of stipends to support young and old volunteers for many community organizations, the deterioration of legal representation for the most vulnerable in our community, as well as funding for programs like Meals on Wheels. What is important to note is that in Hawaii, as well as across the nation, the nonproﬁt sector’s single greatest source of revenue comes from the government in the form of grants and contracts. Since the late 1960s, we have seen a steady devolution of services that used to be provided by government now in the hands of nonproﬁt agencies. ADVERTISING

To the extent that those funds are cut, no amount of local philanthropy can even begin to replace those funds. Not only will we lose essential services in our state but these cuts would also aﬀect the employees of charitable organizations, which represents nearly 8 percent of the state’s workforce. Another example are proposed changes to the federal tax code, which include the elimination of the estate tax, extending the charitable deduction to non-itemizers and increasing the standard deduction for charitable gifts while lowering the highest marginal tax rate. The various proposals cut both ways in terms of its impact on charitable giving but the most diﬃcult aspect of the tax reform debate is the uncertainty it creates which tends to dampen tax planning, including charitable gifts. Wherever all of this ends up, there will be changes ranging from relatively mild to

extremely diﬃcult for the charitable sector. It’s time now for the sector to come together and work closely with our elected oﬃcials to anticipate potential outcomes and our response. On Aug. 24, national experts on the federal budget, advocacy and lobbying, and tax policy and charitable giving will join with some our local oﬃcials and nonproﬁt leaders to learn about the current proposals and how we might advocate both nationally and locally in anticipation of those changes. Nonproﬁts and board members are invited to join the discussion (see HawaiiCommunityFoundation.org). Nonproﬁt organizations must build their capacity to advocate on behalf of their communities and amplify their voices through collaboration. In all likelihood, federal resources will be cut and we need to organize now on how we best reframe our social compact for Hawaii and how we work together to mitigate negative impacts as well as use this moment for reinvention as much as we can. Micah Kāne is CEO/president of the Hawaii Community Foundation; Kelvin Taketa is senior fellow.