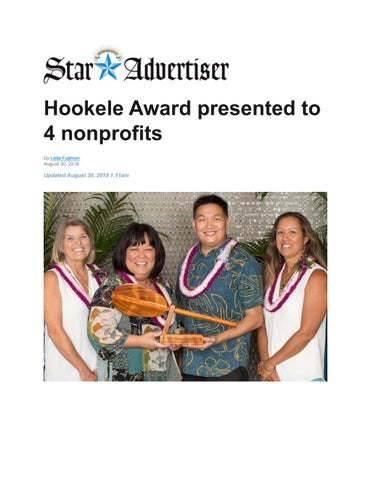 Hawaii Community Foundation awarded this year’s Hookele Award and $10,000 each to the heads of four local nonprofits. The award is given to leaders as an opportunity for them to rejuvenate themselves and invest in professional development. Prior awardees have used the money to take family trips, attend conferences and meet leaders around the world. This year’s awardees are: >> Jan Harada, president and CEO of Helping Hands Hawaii. “The health and human services nonprofit she oversees helps thousands of individuals and households across the state every year in their struggles with poverty, homelessness, mental illness, addition and language barriers,” the foundation said. >> Angela Hiilei Kawelo, executive director of Paepae o Heeia. Kawelo was one of seven original co-founders of the group that restores the 800-year-old, 88-acre Heeia Fishpond. Its mission is to educate the community about Hawaiian aquaculture, ingenuity of the kupuna and keeping fish cultivation alive. >> Susan Maddox, Friends of the Future executive team leader, has been part of the nonprofit sector for more than 40 years, and has mentored many emerging in the community, sharing her knowledge to help them develop their skills. >> Randy Wong, president of the Hawaii Youth Symphony. Wong had served as the symphony’s executive director since 2012, and was recently promoted to president. “Under his leadership, the group’s strategic vision has grown to help all children realize their fullest potential through orchestral music,” the foundation said. Donors to the Kelvin Taketa Hookele Leadership Award Fund know where the money goes, a foundation spokeswoman said. The endowed fund generates the award money each year.

Hawaii Community Foundation awarded this year’s Hookele Award and $10,000 each to the heads of four local nonprofits. The award is given to...

Hawaii Community Foundation awarded this year’s Hookele Award and $10,000 each to the heads of four local nonprofits. The award is given to...