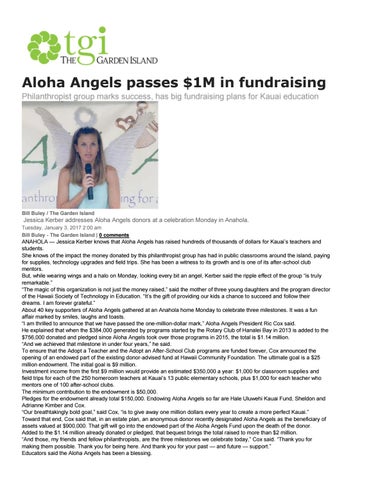 ANAHOLA — Jessica Kerber knows that Aloha Angels has raised hundreds of thousands of dollars for Kauai’s teachers and students. She knows of the impact the money donated by this philanthropist group has had in public classrooms around the island, paying for supplies, technology upgrades and field trips. She has been a witness to its growth and is one of its after-school club mentors. But, while wearing wings and a halo on Monday, looking every bit an angel, Kerber said the ripple effect of the group “is truly remarkable.” “The magic of this organization is not just the money raised,” said the mother of three young daughters and the program director of the Hawaii Society of Technology in Education. “It’s the gift of providing our kids a chance to succeed and follow their dreams. I am forever grateful.” About 40 key supporters of Aloha Angels gathered at an Anahola home Monday to celebrate three milestones. It was a fun affair marked by smiles, laughs and toasts. “I am thrilled to announce that we have passed the one-million-dollar mark,” Aloha Angels President Ric Cox said. He explained that when the $384,000 generated by programs started by the Rotary Club of Hanalei Bay in 2013 is added to the $756,000 donated and pledged since Aloha Angels took over those programs in 2015, the total is $1.14 million. “And we achieved that milestone in under four years,” he said. To ensure that the Adopt a Teacher and the Adopt an After-School Club programs are funded forever, Cox announced the opening of an endowed part of the existing donor-advised fund at Hawaii Community Foundation. The ultimate goal is a $25 million endowment. The initial goal is $9 million. Investment income from the first $9 million would provide an estimated $350,000 a year: $1,000 for classroom supplies and field trips for each of the 250 homeroom teachers at Kauai’s 13 public elementary schools, plus $1,000 for each teacher who mentors one of 100 after-school clubs. The minimum contribution to the endowment is $50,000. Pledges for the endowment already total $150,000. Endowing Aloha Angels so far are Hale Uluwehi Kauai Fund, Sheldon and Adrianne Kimber and Cox. “Our breathtakingly bold goal,” said Cox, “is to give away one million dollars every year to create a more perfect Kauai.” Toward that end, Cox said that, in an estate plan, an anonymous donor recently designated Aloha Angels as the beneficiary of assets valued at $900,000. That gift will go into the endowed part of the Aloha Angels Fund upon the death of the donor. Added to the $1.14 million already donated or pledged, that bequest brings the total raised to more than $2 million. “And those, my friends and fellow philanthropists, are the three milestones we celebrate today,” Cox said. “Thank you for making them possible. Thank you for being here. And thank you for your past — and future — support.” Educators said the Aloha Angels has been a blessing.

Sherry Gonsalves, Kilauea principal, said the group’s financial support and efforts through the mentor program and after-school clubs have made a significant contribution in education. “These mentors coming into our schools make a huge impact on the lives of these students and it helps the students that you truly believe in them,” she said. “They can be inspired and they can have opportunities beyond what they think is available to them.” She thanked the investors for believing in Aloha Angels, too. “The true impact that Aloha Angels has had on our school will last a lifetime,” she said. Scott and Missy Schwemmer, Kilauea teachers, have been in education 20 years. “We never experienced something like this, with the community caring so much,” Missy Schwemmer said. The money for supplies and field trips, the program, “iPals4iPads” to provide iPad minis to schools in Kilauea and Hanalei, makes the educational experience better, she said. “We just want to thank you from our hearts and tell you how grateful we are,” Missy Schwemmer said. “It’s a great thing when we have everything we really need,” Scott added. Investors said they were glad to help. Natalia Lagmay of Saltchuk Hawaii Companies is a $10,000 donor to Aloha Angels. She recalled meeting Cox two years ago. “I was blown away by his passion, by his vision, though I thought it was a crazy vision,” she said, laughing. “Boy, I was wrong.” “Of course I could not say no,” Lagmay said “Who can say no to Ric Cox?” Jonathan McRoberts, another $10,000 donor, was a teacher early in his career. “I know what teachers go through, I know how hard of a job it is if you do it right,” he said. “It’s hard to do it right when you’re making so little money.” McRoberts has three grandchildren in public schools on Kauai. “The more we can do for public schools, the better off Kauai will be and the better off all of us will be,” he said. Cox has been the program’s strongest advocate and is often asked why. He said part of the reason is because Hawaii spends less per student than any other state, or that Hawaii teachers have the lowest median income of teachers in any state, which leads to high turnover. He said Hawaii spends less than any other state on capital improvements to its schools, too. But the real motivation behind his passion for Aloha Angels is “more importantly, to give Kauai students a better shot at achieving The American Dream, and of achieving their dream, whether that dream is graduating from college, escaping a miserable home life, starting their own business, being happily married and being a successful parent, becoming a teacher, staying out of jail, winning a Nobel Prize, or being the first female on Mars. That’s why we do what we do. That’s why we give as generously, and as cheerfully, as we possibly can.” http://thegardenisland.com/news/local/aloha-angels-passes-m-in-fundraising/article_2dae3286-ce1b-5ee0-a09c-0a144fc941eb.html

Sherry Gonsalves, Kilauea principal, said the group’s financial support and efforts through the mentor program and after-school clubs have m...

Sherry Gonsalves, Kilauea principal, said the group’s financial support and efforts through the mentor program and after-school clubs have m...