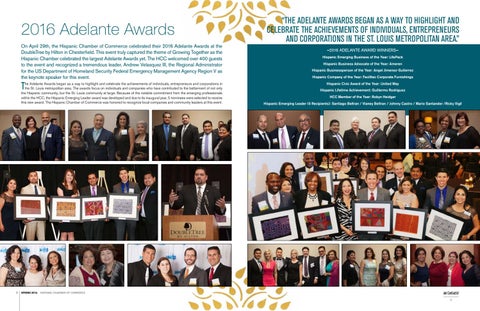 2016 Adelante Awards On April 29th, the Hispanic Chamber of Commerce celebrated their 2016 Adelante Awards at the DoubleTree by Hilton in Chesterfield. This event truly captured the theme of Growing Together as the Hispanic Chamber celebrated the largest Adelante Awards yet. The HCC welcomed over 400 guests to the event and recognized a tremendous leader, Andrew Velasquez III, the Regional Administrator for the US Department of Homeland Security Federal Emergency Management Agency Region V as the keynote speaker for this event.

he Adelante Awards began as a way to highlight and celebrate the achievements of individuals, entrepreneurs and corporations in the St. Louis metropolitan area. The awards focus on individuals and companies who have contributed to the betterment of not only the Hispanic community, but the St. Louis community at large. Because of the notable commitment from the emerging professionals within the HCC, the Hispanic Emerging Leader award was developed and due to its inaugural year, 5 nominees were selected to receive this new award. The Hispanic Chamber of Commerce was honored to recognize local companies and community leaders at this event. 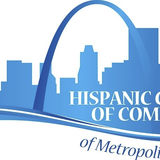