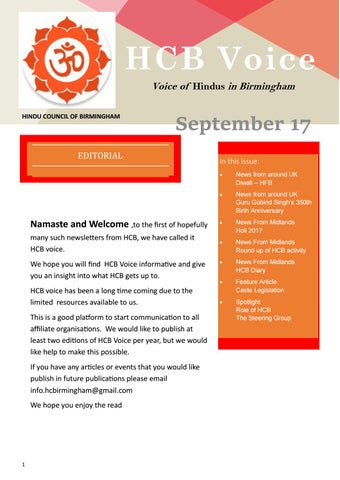 News from around UK Diwali – HFB

Namaste and Welcome ,to the first of hopefully

many such newsletters from HCB, we have called it HCB voice.

News From Midlands Round up of HCB activity

We hope you will find HCB Voice informative and give you an insight into what HCB gets up to. HCB voice has been a long time coming due to the limited resources available to us. This is a good platform to start communication to all affiliate organisations. We would like to publish at least two editions of HCB Voice per year, but we would like help to make this possible. If you have any articles or events that you would like publish in future publications please email info.hcbirmingham@gmail.com We hope you enjoy the read

NEWS FROM AROUND THE UK HFB DIWALI IN PARLIAMENT

Nov2016: Hindu Forum of Britain (HFB) organises a Cross party Diwali celebrations in the House of Commons. As paid up members of HFB, HCB was invited to attend and help with registration of guests. The House of Commons pavilion had a lovely annakut display and attendees were given a sweet (mitai) and had a tilak put on their forehead on arrival. There were some soft drinks and snacks whilst attendees networked. HCB have, in particular opened up communication links with the Hindu Armed forces Network who were in attendance. The event compere was Kapilbhai Dukadia (Kapils Khichadi columnist). MP â&#x20AC;&#x2DC;from all parties came and wished us a happy Diwali. The highlight was a dance act from Kashmir which was part of a cultural Festal on Jammu and Kashmir which had been on a tour in London.

A holi report was sent out just after the event so this article will be brief. Holi was well attended and supported by the public. Over 1500 devotees attended through the evening. A big thank you to all our supporters, donors and volunteers without you it wouldnâ&#x20AC;&#x2122;t have been possible. The future of Holi is in the balance, as a secure funding stream needs to be worked out and finding suitable hosts. HCB as a political body should not be tasked with hosting this event. This will be discussed at a future general meeting. It should be noted that for the first time this event broke even with a small ÂŁ200 surplus.

West Midlands Metro Mayor Candidate debate: Hindu forum of Walsall organised a question time style debate with all the potential mayoral candidates. HCB supported the event, attended planning meetings and promoted the event to our members. The debate was held at Shree Ram Mandir Walsall and was well attended by over 200 people. Good links were made with all candidates and the eventual mayor Andy Street

Commonwealth Day In Victoria Square outside the council house a flag raising ceremony was conducted.

Diwali with the Bishop For the first time the Bishop of Birmingham requested the pleasure of a dozen invited guested from the Hindu community to celebrate Diwali at his home. The Bishop had laid out the pathway to his home with candles, which was a nice touch. There were some interesting philosophical debate and some good old fashioned chat over tea and soft drinks. After a vegetarian dinner , the Bishop had laid on some fireworks , which we all enjoyed. We had the opportunity to perform aarti and had set up a small Pooja area.

NEWS FROM MIDLANDS ROUND-UP OF HCB ACTIVITY Most of HCB work is behind the scenes making contact and networking to keep the Hindus in Birmingham a relevant community. To give you a flavour of our diary, the last two years engagements are listed. The more HCB is seen in the outside wider community more we are invited to functions and events. This consequently means when leading figures want to speak to our community, we rely on our member organisations for support. Please also note the current office bearers have not claimed any expenses for fuel, transport, parking, telephone, event tickets and official dinner invites. A conservative estimate of the savings to HCB are around ÂŁ2000.

Caste Legislation – A Brief History 2008: Consultation on Equality Act. Pressure groups wanted Caste included Hindu organisations successfully stopped it. However, the provision was kept in the Act that a Minister “MAY” in the future bring in Caste Law. 2010: The Single Equality Act came into force with explanatory notes that attempted to define caste 2013: Whilst a Bill called “Business and Enterprise Regulatory bill” was going through the parliamentary process in the Lords. An amendment was proposed by a former Bishop of Oxford Lord Harries to amend the Equality Act with a single word change to Minister “MUST” bring in secondary legislation to add Caste to Section 9(1) of Equality Act to make Caste an aspect of Race. It is important to understand , as Caste will be an aspect of race, essentially, it will mean where ever you can’t discriminate on Race ground you wont be able to discriminate on Caste grounds. The amendments went back to House of Commons, they rejected it. The House of Lords sent the amendment back to Commons for a 2nd time. For fear of losing the Enterprise and regulatory Bill, Vince Cable of the coalition recommend the commons to accept the amendment. With largely the Lib-Dems and Labour support, the amendment went through and has Royal accent to be law. So we are now at the stage where the Minister “MUST” bring in secondary legislation to add caste to Section 9(1) of equality Act.

Where Now? Hindu organisations, have been protesting to the government since 2013, that it was unfair how this law was bought in via the back door without consultation. The Conservative government doesn’t want to bring this law in and has been dragging its heels since 2013. 2014: At an Employment tribunal case “Chandhok v Tirkey”, half way through the case the appellants introduced “caste” as an issue in the case. The Respondents tried to have it struck out but failed to do so. The Judge ruled that Caste was covered by “ethnic origin” of the equality Act. Chandhoks were Buddhists and Tirkey was a Hindu convert to Christianity. There are lots of issues with this case but too complicated to get into here. 2016:There was a threat of Judicial review, as the will of parliament hasn’t been followed through. Faced with this, in September 2016 a Consultation was announced. 2017: In March the government issued the consultation with a end date of 18th July 2017: In July the government announced an extension to consultation to 18th September due to the election Purdah.

Consultation The consultation isn’t the easiest to understand, its technical and not really worded for lay people. It’s confusing and difficult to understand. But it’s the best we have and have to work with it to make the most of it. We have after some initial trials now have fully completed forms, ready for you to sign and complete contact details. We have made it as easy as possible. Forms have been distributed to Samaj’s , Mandirs, various organisations and to those on HCB mailing list. Contact us if you require forms.

Why Bother? So, why bother? It doesn’t affect me, what do I care if this law comes in. Effect of Law on Community In job applications you will need to declare your caste…..do you know your caste? You may know your Jati. Employers (especially Indian) will need to monitor applications and employees to guard against frivolous litigation. Samaj’s based on Jati’s maybe deemed unlawful by charity commission and charity status could be at risk. The Law make no distinction between Caste and Jati. Caste is not the same as Varna Caste is higher lower, verna is not higher or lower An equality Act will make some Hindus higher and some lower

SPOTLIGHT THE ROLE OF HCB We are often asked “what is the role of HCB” HCB is an umbrella organisation that represents the interests of the Hindu community in the civic and multifaith arena of the City. We are here to ensure the voice of Hindus is heard in a city dominated by two major faiths. To ensure that Hindu’s remained relevant and are consulted on matters that affects our community. We are not a Mandir or Samaj organisation; those institutions serve the public well and are successful in what they do. HCB is not in competition with its members to hold functions and religious events, we are here to compliment and be a long term partner with all our member organisations. The role of HCB is illustrated by this “2x2” matrix. What it shows is that most organisations float about in the bottom left hand box, which is serving their members. Some organisations are pan Hindu and stretch across the bottom two boxes. On occasions organisations may stray into the top left box to invite dignitaries to their events but then go back to the bottom left box. What HCB provides is that link to the top right box where external organisations sit. HCB is only as strong as the support it receives from its members.

How did the Steering Group come about? In April 2015 a full committee of HCB was elected. As per the HCB constitution elections have to be held every year. In April 2016 AGM and elections were called with a poor turnout. The committee stepped down except for President, Secretary and Assistant Treasurer, who carried on in position. In June 2016 an open meeting was called to define HCB. The outcome was to form a committee from interested individuals to help formulate the aims and objectives. In January 2017 this “steering group” reported back to the membership, the three strands of HCB activity. A new updated constitution is required Cohesive United Hindu Community Hindu voice in the Ethnic/Faith space Promote Hindu Dharma and Culture The steering group were tasked with formulating the delivery plan for objectives and constitution. HCB Executives President – Tarangbhai Shelat Secretary – Hiteshbhai Kukadia Ass Treasurer – Hameerbhai Chouhan The steering group Mahendrabhai Dabhi Jaybhai Jina Simonbhai Dey Vipulbhai Mistry