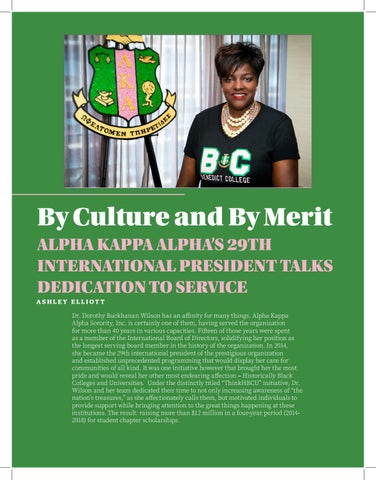 By Culture and By Merit ALPHA KAPPA ALPHA’S 29TH INTERNATIONAL PRESIDENT TALKS DEDICATION TO SERVICE ASHLEY ELLIOTT Dr. Dorothy Buckhanan Wilson has an affinity for many things. Alpha Kappa Alpha Sorority, Inc. is certainly one of them, having served the organization for more than 40 years in various capacities. Fifteen of those years were spent as a member of the International Board of Directors, solidifying her position as the longest serving board member in the history of the organization. In 2014, she became the 29th international president of the prestigious organization and established unprecedented programming that would display her care for communities of all kind. It was one initiative however that brought her the most pride and would reveal her other most endearing affection – Historically Black Colleges and Universities. Under the distinctly titled “ThinkHBCU” initiative, Dr. Wilson and her team dedicated their time to not only increasing awareness of “the nation’s treasures,” as she affectionately calls them, but motivated individuals to provide support while bringing attention to the great things happening at these institutions. The result: raising more than $12 million in a four-year period (20142018) for student chapter scholarships. 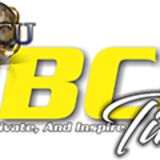 Welcome to the Spring 2019 edition of HBCU Times Magazine! Our exciting theme for this special edition is, “HBCU Excellence, HBCUs Matter.”...

Welcome to the Spring 2019 edition of HBCU Times Magazine! Our exciting theme for this special edition is, “HBCU Excellence, HBCUs Matter.”...