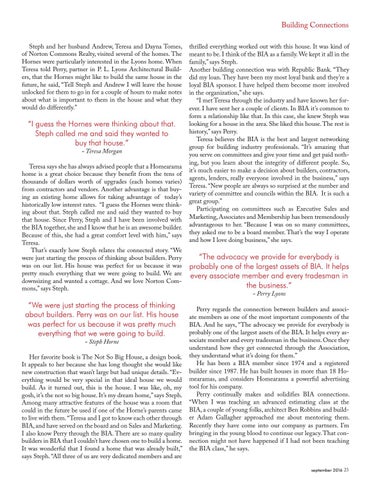 Building Connections Steph and her husband Andrew, Teresa and Dayna Tomes, of Norton Commons Realty, visited several of the homes. The Hornes were particularly interested in the Lyons home. When Teresa told Perry, partner in P. L. Lyons Architectural Builders, that the Hornes might like to build the same house in the future, he said, “Tell Steph and Andrew I will leave the house unlocked for them to go in for a couple of hours to make notes about what is important to them in the house and what they would do differently.”

“I guess the Hornes were thinking about that. Steph called me and said they wanted to buy that house.” - Teresa Morgan

Teresa says she has always advised people that a Homearama home is a great choice because they benefit from the tens of thousands of dollars worth of upgrades (each homes varies) from contractors and vendors. Another advantage is that buying an existing home allows for taking advantage of today’s historically low interest rates. “I guess the Hornes were thinking about that. Steph called me and said they wanted to buy that house. Since Perry, Steph and I have been involved with the BIA together, she and I know that he is an awesome builder. Because of this, she had a great comfort level with him,” says Teresa. That’s exactly how Steph relates the connected story. “We were just starting the process of thinking about builders. Perry was on our list. His house was perfect for us because it was pretty much everything that we were going to build. We are downsizing and wanted a cottage. And we love Norton Commons,” says Steph.

“We were just starting the process of thinking about builders. Perry was on our list. His house was perfect for us because it was pretty much everything that we were going to build. - Steph Horne

Her favorite book is The Not So Big House, a design book. It appeals to her because she has long thought she would like new construction that wasn’t large but had unique details. “Everything would be very special in that ideal house we would build. As it turned out, this is the house. I was like, oh, my gosh, it’s the not so big house. It’s my dream home,” says Steph. Among many attractive features of the house was a room that could in the future be used if one of the Horne’s parents came to live with them. “Teresa and I got to know each other through BIA, and have served on the board and on Sales and Marketing. I also know Perry through the BIA. There are so many quality builders in BIA that I couldn’t have chosen one to build a home. It was wonderful that I found a home that was already built,” says Steph. “All three of us are very dedicated members and are

thrilled everything worked out with this house. It was kind of meant to be. I think of the BIA as a family. We kept it all in the family,” says Steph. Another building connection was with Republic Bank. “They did my loan. They have been my most loyal bank and they’re a loyal BIA sponsor. I have helped them become more involved in the organization,” she says. “I met Teresa through the industry and have known her forever. I have sent her a couple of clients. In BIA it’s common to form a relationship like that. In this case, she knew Steph was looking for a house in the area. She liked this house. The rest is history,” says Perry. Teresa believes the BIA is the best and largest networking group for building industry professionals. “It’s amazing that you serve on committees and give your time and get paid nothing, but you learn about the integrity of different people. So, it’s much easier to make a decision about builders, contractors, agents, lenders, really everyone involved in the business,” says Teresa. “New people are always so surprised at the number and variety of committee and councils within the BIA. It is such a great group.” Participating on committees such as Executive Sales and Marketing, Associates and Membership has been tremendously advantageous to her. “Because I was on so many committees, they asked me to be a board member. That’s the way I operate and how I love doing business,” she says.

“The advocacy we provide for everybody is probably one of the largest assets of BIA. It helps every associate member and every tradesman in the business.” - Perry Lyons

Perry regards the connection between builders and associate members as one of the most important components of the BIA. And he says, “The advocacy we provide for everybody is probably one of the largest assets of the BIA. It helps every associate member and every tradesman in the business. Once they understand how they get connected through the Association, they understand what it’s doing for them.” He has been a BIA member since 1974 and a registered builder since 1987. He has built houses in more than 18 Homearamas, and considers Homearama a powerful advertising tool for his company. Perry continually makes and solidifies BIA connections. “When I was teaching an advanced estimating class at the BIA, a couple of young folks, architect Ben Robbins and builder Adam Gallagher approached me about mentoring them. Recently they have come into our company as partners. I’m bringing in the young blood to continue our legacy. That connection might not have happened if I had not been teaching the BIA class,” he says. september 2016 23 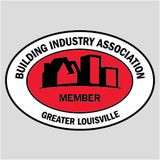 Louisville Builder magazine is the official monthly publication for the members of the Building Industry Association of Greater Louisville....

Louisville Builder magazine is the official monthly publication for the members of the Building Industry Association of Greater Louisville....