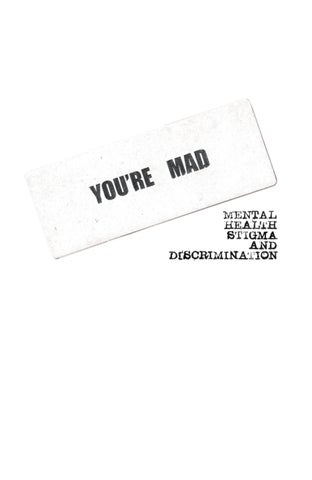 espite mental health problems and illnesses being such a common issue, many sufferers still face stigma and discrimination. This study will try to develop an understanding of the types of discrimination people are exposed to and whether this affects their ability to speak out about their problems. From this research it should be possible to work out the potential directions the project could take in relation to the subject matter.

What are the different types of mental illnesses? What are the most common disorders or problems that people are suffering from? How aware are people in general of mental health illnesses and do they hold any false perceptions about regarding people with mental health illnesses? How accurate is the representation of the mentally ill in the media and how realistic do people believe these portrayals are?

rom observations over the past couple of years, it is noted that numerous people who have not had any personal experiences of mental health issues do not know how to talk about such illnesses. For example, when someone opens up or asks for help with their mental health problems they may receive a variety of unhelpful responses, such as: ‘Don’t be silly’; ‘That’s just stupid’; ‘You mustn’t say things like that’; and ‘You just need to be happy and

smile’. It has also been observed on one occasion that when told that comments such as these were unhelpful, someone responded: “Well, what do you expect me to say?” In July 2012, over a period of five days an adult’s mental breakdown was observed. During this time it was also possible to view the emotional impact this had on the people close to this person and also in the weeks after the aforementioned person was admitted to a psychiatric hospital. Within these weeks, the reactions of people outside the immediate family of this person were noted. On hearing about the hospital admission people were concerned until they discovered the reason behind this. A couple of people were unconcerned or possibly relieved to learn that the reason was mental health related, and appeared to believe that a mental health breakdown was not that serious: “Oh, she’ll be alright”; “Nothing serious then, she’ll get better like she did last time.” (The above mentioned had previously experienced a couple of breakdowns and several hospital admissions between 2006 and 2008.) Other people tended to not know how to respond and this resulted in just wishing the patient well. During these observations it also became evident that most people’s concern were with the patient in question and the emotional impact on the remaining family members and their own mental health issues were forgotten or not realized.

wo questionnaires have been composed in order to collect data and peopleâ&#x20AC;&#x2122;s beliefs, views and opinions. The first questionnaire (QA) did not have a specific target audience, as the purpose was to gain a general overview of the perceptions on mental health issues. When asking people what mental health illnesses they were aware of, QA revealed many incorrect answers such as Down syndrome, dyslexia, brain tumor, retardation and spastic. QA also asked people to describe someone with a mental illness. There was a range of different answers. Some people put forward the view that

they were normal but misunderstood individuals who are discriminated against. This type of answer was only received from a small percentage of people. There were a number of answers that could be perceived as negative or even discriminatory: crazy, scary, dangerous, weird, mad, disabled.

The second questionnaire (QB) was targeted at people who had experienced a mental health problem. Questions were asked in order to learn about people’s personal experiences including how they feel when talking about their problems and whether they have faced any negative comments or discrimination as a result of having mental health issues. Responses for the questionnaire are still being waited upon however from the 60 answers collected it is possible to get an idea of the types of feelings and reactions these people have experienced. A couple of people have written that they feel comfortable discussing their issues however the remaining people presented more negative responses. In answer to how they feel when talking about their problems, some of the popular answers were ‘embarrassed’, ‘ashamed’, ‘uncomfortable’ and ‘weak’. The question about negative comments/discrimination revealed that people felt their problems were being dismissed, including by mental health professionals. A few people have quoted things that have been said to them such as ‘just get over it’, ‘stop thinking about yourself all the time’and ‘just pull yourself together’.

n QA, one of the questions asked people to list the first 3 mental health illnesses that they could think of. The top three answers were depression (59% gave this answer), schizophrenia (53%) and bipolar b ipolar (32%). There were a total of 26 responses that could be considered as incorrect answers. 63% of the total responders were between the ages of 19 and 25, which could suggest that ignorance

regarding mental health illnesses could be due to lack of education or experience. 34% of the 59 respondents revealed that they had experienced a mental health illness. Although most people had not had any personal experience, about 79% said that they knew someone who had experienced a mental health problem. QA also revealed that 71% had come across the topic of mental health in films, and the same amount also in newspapers and news on television. This was shortly followed by 66% in soaps and dramas. The same 59 people were asked to rate the accuracy of the portrayal of mental health problems in the media on a scale of 1 â&#x20AC;&#x201C; 10 in which 1 related to completely inaccurate and 10, completely accurate. The most popular answer was 5 (34%). Nine people rated it 4 and 6 and 7 received eight votes each. This reveals that people are aware or believe that mental health problems are not always represented accurately.

In QB the target audience was asked to give an indication of what mental health illnesses they had suffered from. The highest results are: depression with 68% and anxiety 57%. The lowest answers are bipolar (7%) and schizophrenia (10%). The 60 responses revealed that 62% have experienced negative comments or discrimination as a result of having mental health problems. QB also revealed that people are more likely to go to or talk to their GP (53%) than they are to their parents (38%), siblings (25%) or friends (50%).

esearch into the different types of mental illnesses is important as it is essentially the topic of focus in the project. Understanding these illnesses and the various methods of treatment is necessary to gain an insight into the lives of the sufferers such as those who responded to the second questionnaire (QB) mentioned above. By reading peoples personal stories, either in books or online, it has been possible to note the types of stigma and discrimination these people face or have faced, many of which are similar to that revealed in QB. It has also been essential to examine various kinds of statistics related to mental health as this gives an impression of the amount of people dealing with these types of issues. In addition, looking at the mediaâ&#x20AC;&#x2122;s portrayal of mental health problems has shown why some people may have false perceptions about mental health, such as those indicated in the results from the first questionnaire (QA).

he mental health charity, Mind, provides an extensive range of information about mental health illnesses including a large selection of leaflets, some which provide a general overview of these types of problems and others which focus on one illness. Whilst these leaflets are targeted at the people suffering from such illness or their family, they do supply a significant amount of information

which gives the reader an understanding of the different types of illness. Mind also states various statistics such as the one quoted above. There are a large amount of other charities which provide similar data. Time to change, led by mind, is an organization standing up to mental health discrimination. On their website they have posted many people’s blogs and stories. These give a true account of the illnesses and discrimination people have faced and how they have started to overcome these problems. Autobiographical books such as ‘Today I’m Alice’ (2009) and ‘The Devil Within: A Memoir of Depression’ (2009) also give similar insights and views about living with a mental illness. These books have given an insight into how difficult life with a mental health issue is. As already noted from the questionnaire results there are many people who have negative experiences as a result but these books show that people can begin to recover, although being misunderstood by other does not make things any easier.

Mass Media and Mental Illness: A Literature Review (2004) assesses the accuracy of the portrayal of the mentally ill in a range of areas. Newspapers feature highly in the statistics for “Popular Sources of Information about Mental Illness”. A similar statistic was recorded in the first questionnaire above.

o far the secondary research undertaken has provided knowledge, facts and statistics about mental health problems, from individual illnesses and treatments to cultural and media perceptions. The primary research gathered through questionnaires has supplied more personal ideas and insights into both beliefs about mental health issues and peopleâ&#x20AC;&#x2122;s experiences. The personal experiences recorded so far have been important because they offer truthful accounts of what they have been subjected to. Due to the nature of the topic it may be necessary to conduct additional questionnaires or interviews to gather knowledge of a wider range of experiences. Once design ideas have been developed it would be worth testing and getting feedback from target audiences, especially those who have encountered mental health problems.

t this stage there is a variety of directions that this project could take. It is evident from both primary and secondary research that stigma and discrimination in relation to mental health problems is an issue. As well as this, the questionnaires have revealed that people with mental health illnesses also find it difficult to talk about their problems. One possible target audience could be those who have not experienced or do not understand mental health problems, in order to change their negative and incorrect beliefs. Alternatively, the project could be aimed towards people suffering with mental health problems. Design ideas could be based upon quotes or a narrative such as those written in response to the questionnaires. In order to do this more research would have to be undertaken such as interviews with relevant people or a documentation of personal experiences. If the project were to take on an educational theme it may be worth targeting a younger age group, for example 11 â&#x20AC;&#x201C; 25 year olds, especially as over half the results from questionnaire A were received from people within this age group. Alternatively, there may not be a specific target age group as mental health issues can affect anyone regardless of their age. This is my final project proposal in a visual form

This is my final project proposal in a visual form