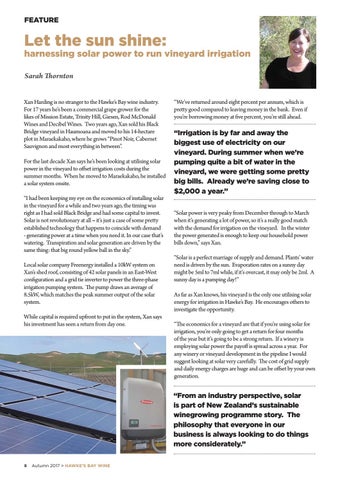 Let the sun shine: harnessing solar power to run vineyard irrigation Sarah Thornton Xan Harding is no stranger to the Hawke’s Bay wine industry. For 17 years he’s been a commercial grape grower for the likes of Mission Estate, Trinity Hill, Giesen, Rod McDonald Wines and Decibel Wines. Two years ago, Xan sold his Black Bridge vineyard in Haumoana and moved to his 14-hectare plot in Maraekakaho, where he grows “Pinot Noir, Cabernet Sauvignon and most everything in between”. For the last decade Xan says he’s been looking at utilising solar power in the vineyard to offset irrigation costs during the summer months. When he moved to Maraekakaho, he installed a solar system onsite. “I had been keeping my eye on the economics of installing solar in the vineyard for a while and two years ago, the timing was right as I had sold Black Bridge and had some capital to invest. Solar is not revolutionary at all – it’s just a case of some pretty established technology that happens to coincide with demand - generating power at a time when you need it. In our case that’s watering. Transpiration and solar generation are driven by the same thing: that big round yellow ball in the sky.” Local solar company Freenergy installed a 10kW system on Xan’s shed roof, consisting of 42 solar panels in an East-West configuration and a grid tie inverter to power the three-phase irrigation pumping system. The pump draws an average of 8.5kW, which matches the peak summer output of the solar system. While capital is required upfront to put in the system, Xan says his investment has seen a return from day one.

“We’ve returned around eight percent per annum, which is pretty good compared to leaving money in the bank. Even if you’re borrowing money at five percent, you’re still ahead.

“Irrigation is by far and away the biggest use of electricity on our vineyard. During summer when we’re pumping quite a bit of water in the vineyard, we were getting some pretty big bills. Already we’re saving close to $2,000 a year.” “Solar power is very peaky from December through to March when it’s generating a lot of power, so it’s a really good match with the demand for irrigation on the vineyard. In the winter the power generated is enough to keep our household power bills down,” says Xan. “Solar is a perfect marriage of supply and demand. Plants’ water need is driven by the sun. Evaporation rates on a sunny day might be 5ml to 7ml while, if it’s overcast, it may only be 2ml. A sunny day is a pumping day!” As far as Xan knows, his vineyard is the only one utilising solar energy for irrigation in Hawke’s Bay. He encourages others to investigate the opportunity. “The economics for a vineyard are that if you’re using solar for irrigation, you’re only going to get a return for four months of the year but it’s going to be a strong return. If a winery is employing solar power the payoff is spread across a year. For any winery or vineyard development in the pipeline I would suggest looking at solar very carefully. The cost of grid supply and daily energy charges are huge and can be offset by your own generation.

“From an industry perspective, solar is part of New Zealand’s sustainable winegrowing programme story. The philosophy that everyone in our business is always looking to do things more considerately.” 8 Autumn 2017 &gt; HAWKE’S BAY WINE

Hawke's Bay Wine is the official quarterly magazine of Hawke's Bay Winegrowers Inc. The magazine keeps members of the industry updated on what is happening locally – news, information on the latest developments from experts, research findings, and special features capturing all that makes Hawke's Bay's wine industry unique. 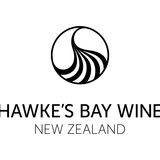