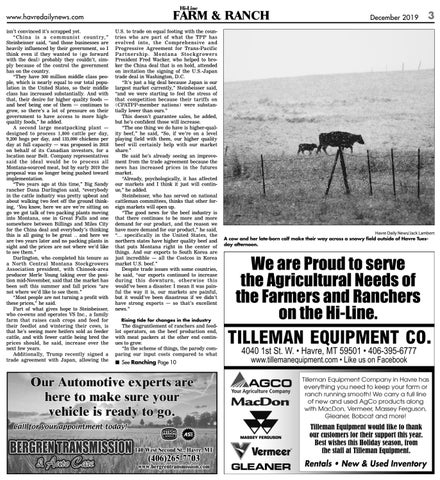 Ranching: Several groups have joined R-CALF’s class-action lawsuit ■ Continued from page 3 we’re getting for our product is quite a bit out of balance,” Darlington said, adding, “Our margins are getting down there; it’s getting pretty tight. It’s pretty much taking the fun out of this deal the way it is.” While president of North Central Montana Stockgrowers in September, Darlington encouraged members of the organization to j o i n a n a t i o n a l Tw i t t e r c a m p a i g n #FairCattleMarkets that was designed to draw attention to problems in the beef industry which favor the packers over the feeders and ranchers. “The packers, they only own them cattle a few days, if that, and their profit margins were anywhere from over $400 to $700 a head at times, depending on where the cattle market was,” he said. “The object was to draw attention to that so somebody could do some investigating into the packing plants for having such a monopoly over the cattle industry.” In the absence of any tangible explanation for prices paid to producers in 2016, Bill Bullard, CEO of Billings-based cattle producer and feeder advocacy group R-CALF USA, had called for an investigation of meat packers’ influence on the market then. He also said Secretary of Agriculture Sonny Perdue has announced the U.S. Department of Agriculture would conduct an investigation into whether any unlawful acts occurred after the Aug. 9 fire in a Tyson plant. In April lawyers representing R-CALF filed a national class-action lawsuit in Illinois, alleging that the four major meat packers in the U.S. — Tyson Foods, Cargill, Brazillian-owned JBS USA and National Beef Packing Co. — have violated U.S. antitrust laws, the Packers and Stockyards Act

Courtesy photo/Rene Brown Cattle gathered for sorting on shipping day wait Nov. 13 in corrals on Tom and Rene Brown's ranch in the Bear Paw Mountains. Rain, snow and muddy conditions caused delays in shipping this fall. and the Commodities Exchange Act, Bullard said. Bullard said his lawsuit alleges that these companies artificially lowered prices paid to cattle producers, while inflating their own profit margins; they periodically reduced slaughter volumes to balance the demand for cattle; when they reduced the slaughter

volumes, they decreased the number of cash cattle market purchases on which they base their contract prices; they worked to minimize competition among packers when buying in the cash market; they imported cattle uneconomically to avoid inflating the average cattle price that the prices of their formula contract cattle are tied to; and they shuttered slaughter plants to help balance supply and demand. He said that an econometric study by R-CALF shows that actions by the major meatpacking plants caused a reduction in the price of cattle by about 7.9 percent annually from January 2015 to present. The intent of the lawsuit, he added, is to recover damages to the producers who incurred them — get reimbursement for all of those individuals who sold cattle while the alleged conspiracy was going on. Three days after the lawsuit was filed, he said, a similar suit was filed in Minnesota on

behalf of consumers so R-CALF’s lawyers made the decision to transfer their suit to Minnesota. Since then, he added, a handful of other suits have been filed and two of t h o s e s u i t s h ave c o n s o l i d a t e d w i t h R-CALF’s. They won’t know until maybe mid-January whether the lawsuit will be going forward, he said. Neither a 2016 investigation by the Senate Judiciary Committee or a 2018 investigation by the U.S. Government Accountability Office found evidence of wrongdoing. But the system is loaded in favor of the meat packers, Steinbeisser said. “We need to take a serious look at how we market beef. Basically we’re letting the packers market our beef and I don’t think that’s a healthy way to do it,” he said, adding, “I’m thinking it’s time for a change.” He said it has been frustrating because beef demand didn’t drop like market prices

www.havredailynews.com isn’t convinced it’s scrapped yet. “ C h i n a i s a c o m m u n i s t c o u n t r y, ” Steinbeisser said, “and those businesses are heavily influenced by their government, so I think even if they wanted to (go forward with the deal) probably they couldn’t, simply because of the control the government has on the country. “They have 300 million middle class people, which is nearly equal to our total population in the United States, so their middle class has increased substantially. And with that, their desire for higher quality foods — and beef being one of them — continues to grow, so there’s a lot of pressure on their government to have access to more highquality foods,” he added. A second large meatpacking plant — designed to process 1,800 cattle per day, 9,200 hogs per day, and 135,000 chickens per day at full capacity — was proposed in 2018 on behalf of its Canadian investors, for a location near Belt. Company representatives said the ideal would be to process all Montana-sourced meat, but by early 2019 the proposal was no longer being pushed toward implementation. “Two years ago at this time,” Big Sandy rancher Dana Darlington said, “everybody in the cattle industry was pretty upbeat and about walking two feet off the ground thinking, ‘You know, here we are we’re sitting on go we got talk of two packing plants moving into Montana, one in Great Falls and one somewhere between Billings and Miles City for the China deal and everybody’s thinking this is all going to be great .. and here we are two years later and no packing plants in sight and the prices are not where we’d like to see them.” Darlington, who completed his tenure as a North Central Montana Stockgrowers Association president, with Chinook-area producer Merle Young taking over the position mid-November, said that the market has been soft this summer and fall prices “are not where we’d like to see them.” “Most people are not turning a profit with these prices,” he said. Part of what gives hope to Steinbeisser, who co-owns and operates VS Inc., a family farm that raises cash crops and feed for their feedlot and wintering their cows, is that he’s seeing more heifers sold as feeder cattle, and with fewer cattle being bred the prices should, he said, increase over the next few years. Additionally, Trump recently signed a trade agreement with Japan, allowing the

FARM & RANCH U.S. to trade on equal footing with the countries who are part of what the TPP has evolved into, the Comprehensive and Progressive Agreement for Trans-Pacific Pa r t n e rs h i p . M o n ta n a S to c k g rowe rs President Fred Wacker, who helped to broker the China deal that is on hold, attended on invitation the signing of the U.S.-Japan trade deal in Washington, D.C. “It’s just a big deal because Japan is our largest market currently,” Steinbeisser said, “and we were starting to feel the stress of that competition because their tariffs on (CPATPP-member nations) were substantially lower than ours.” This doesn’t guarantee sales, he added, but he’s confident those will increase. “The one thing we do have is higher-quality beef,” he said, “So, if we’re on a level playing field with them, our higher quality beef will certainly help with our market share.” He said he’s already seeing an improvement from the trade agreement because the news has increased prices in the futures market. “Already, psychologically, it has affected our markets and I think it just will continue,” he added. Steinbeisser, who has served on national cattleman committees, thinks that other foreign markets will open up. “The good news for the beef industry is that there continues to be more and more demand for our product, and the reason we have more demand for our product,” he said, “... specifically in the United States, the northern states have higher quality beef and that puts Montana right in the center of things. And our exports to South Korea are just incredible — all the Costcos in Korea market U.S. beef.” Despite trade issues with some countries, he said, “our exports continued to increase during this downturn, otherwise this would’ve been a disaster. I mean it was painful the way it is, our markets are painful, but it would’ve been disastrous if we didn’t have strong exports — so that’s excellent news.” Rising tide for changes in the industry The disgruntlement of ranchers and feedlot operators, on the beef production end, with meat packers at the other end continues to grow. “In the scheme of things, the parody comparing our input costs compared to what

Havre Daily News/Jack Lambert A cow and her late-born calf make their way across a snowy field outside of Havre Tuesday afternoon.