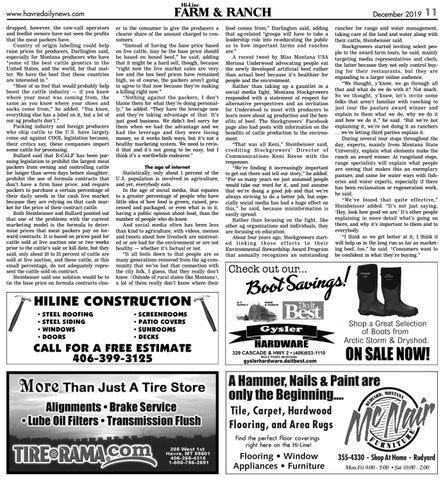 MT producers, feeders are self-advocating internationally, domestically and on the internet Pam Burke community@havredailynews.com At a time when cattle prices are low, the global market is uncertain and meat producers are facing heavy public scrutiny on social media, ranchers are working to secure their business, imagine new market models and wage a measured battle to improve public image. Economically, the last five years have been turbulent for cattle producers — on domestic and foreign fronts and many are getting hit hard as calves go to market this fall. “Well, we’re certainly on the downside of a market, but there’s indications that things are going to get brighter,” said Jim Steinbeisser, 1st vice president of the Montana Stockgrowers Association. The futures market is prompting a better price for larger calves rather than the smaller ones, he said, because the larger calves will be ready to butcher at a time when the futures prices look favorable for feedlots. Prior to the Thanksgiving holiday,

Courtesy photo/Rene Brown Calves wait in an alley on Tom and Rene Brown's ranch on the south side of the Bear Paw Mountains Nov. 13 to be shipped to auction. Muddy conditions from rain and snow required the Browns, assisted by family and friends, to haul their calves off-site to corrals that the semitractor-trailer could access. Steinbeisser said finished cattle were getting $1.15-$1.17 per pound. The general hope is to add 700-900 pounds to calves that start at 450-750 pounds, with a cost of gain at not much more than $1 per pound, he said.

cord lows from 2016 when market prices paid to cattle producers plummeted from near-record high prices of around $2.50 per pound in late 2014 to $1.20 to $1.35 per pound on a 600 pound calf, and some prices lower than that, by fall 2016. On the heels of this price drop, and shortly after he took office, President Donald Trump withdrew U.S. participation in the Trans-Pacific Partnership, a trade agreement, which had not been ratified by Congress, that also included Australia, Brunei, Canada, Chile, Japan, Malaysia, Mexico, New Zealand, Peru, Singapore and Vietnam. While many producers in the U.S. were happy to leave the TPP, without it in place, new trade agreements needed to be forged with many of these nations, which were initially staying loyal to other member nations. On the heals of the TPP withdrawal, Trump also announced the U.S. wanted a renegotiation of the North American Free Trade Agreement between the U.S., Canada and Mexico. While this could benefit cattle producers in the long run, short term, this added to uncertainty in the market. The new free-trade agreement, called USMCA — the United States-Mexico-Canada Agreement — was signed in November 2018, but has not been ratified by any of the countries’ legislatures. As an upturn for Montana cattle producers, U.S. Sen. Steve Daines, R-Mont., helped arrange a meeting between Chinese representatives and the Montana Stockgrowers Association. From that meeting a deal was made in late 2017 between Chinese e-commerce giant JD.com to purchase $200 million dollars of Montana-sourced beef and build a meatpacking plant in the state, most likely between Billings and Miles City. Before that deal could be signed, a trade war had started between China and the U.S. Back-and-forth threats of tariff hikes, including on beef, stalled the deal, but Steinbeisser

www.havredailynews.com dropped, however, the cow-calf operators and feedlot owners have not seen the profits that the meat packers have. Country of origin labelling could help raise prices for producers, Darlington said, especially for Montana producers who have “some of the best cattle genetics in the United States, and the world, for that matter. We have the beef that these countries are interested in.” “Most of us feel that would probably help boost the cattle industry — if you knew where your meat was coming from, the same as you know where your shoes and socks come from,” he added. “You know, everything else has a label on it, but a lot of our ag products don’t.” Packing industry and foreign producers who ship cattle to the U.S. have largely come out against COOL legislation because, their critics say, these companies import some cattle for processing. Bullard said that R-CALF has been pursuing legislation to prohibit the largest meat packers from owning and controlling cattle for longer than seven days before slaughter; prohibit the use of formula contracts that don’t have a firm base price; and require packers to purchase a certain percentage of their daily needs in the cash live market because they are relying on that cash market for the price of their contract cattle. Both Steinbeisser and Bullard pointed out that one of the problems with the current marketing model is the formula to determine prices that meat packers pay on forward contracts. It is based on prices paid for cattle sold at live auction one or two weeks prior to the cattle’s sale or kill date, but they said, only about 20 to 25 percent of cattle are sold at live auction, and these cattle, at this small percentage, do not adequately represent the cattle sold on contract. Steinbesser said one solution would be to tie the base price on formula contracts clos-

FARM & RANCH er to the consumer to give the producers a clearer share of the amount charged to consumers. “Instead of having the base price based on live cattle, may be the base price should be based on boxed beef,” he said, adding that it might be a hard sell, though, because “right now the live market sales are very low and the box beef prices have remained high, so of course, the packers aren’t going to agree to that now because they’re making a killing right now.” “Nothing against the packers; I don’t blame them for what they’re doing personally,” he added. “They have the leverage now and they’re taking advantage of that. It’s just good business. We didn’t feel sorry for them when we had the advantage and we had the leverage and they were losing money, so it works both ways, but it’s not a healthy marketing system. We need to revisit that and it’s not going to be easy, but I think it’s a worthwhile endeavor.” The age of internet Statistically, only about 1 percent of the U.S. population is involved in agriculture, and yet, everybody eats. In the age of social media, that equates to a greater percentage of people who have little idea of how food is grown, raised, processed and packaged, or even what is in it, having a public opinion about food, than the number of people who do know. And social media often has been less than kind to agriculture, with videos, memes and tweets about how livestock are mistreated or are bad for the environment or are not healthy — whether it’s factual or not. “It all boils down to that people are so many generations removed from the ag community that we’ve lost that connection with the city folk, I guess, that they really don’t know. (Outside of rural states like Montana), a lot of them really don’t know where their

food comes from,” Darlington said, adding that ag-related “groups will have to take a leadership role into re-educating the public as to how important farms and ranches are.” A recent tweet by Miss Montana USA Merissa Underwood advocating people eat the newly developed artificial beef rather than actual beef because it’s healthier for people and the environment. Rather than taking up a gauntlet in a social media fight, Montana Stockgrowers responded with a statement of respect for alternative perspectives and an invitation for Underwood to meet with producers to learn more about ag production and the benefits of beef. The Stockgrowers’ Facebook page also had posts with information on the benefits of cattle production to the environment. “That was all Keni,” Steinbeisser said, c re d i t i n g S to c k g rowe rs ’ D i re c to r o f Communications Keni Reese with the responses. “We’re finding it increasingly important to get out there and tell our story,” he added. “For so many years we just assumed people would take our word for it, and just assume that we’re doing a good job and that we’re always striving to do a better job, but especially social media has had a huge effect on this,” he said, because misinformation is easily spread. Rather than focusing on the fight, like other ag organizations and individuals, they are focusing on education. About four years ago, Stockgrowers starte d l i n k i n g t h o s e e f fo r t s to t h e i r Environmental Stewardship Award Program that annually recognizes an outstanding

rancher for range and water management, taking care of the land and water along with their cattle, Steinbeisser said. Stockgrowers started inviting select people to the award farm tours, he said, mainly targeting media representatives and chefs, the latter because they not only control buying for their restaurants, but they are expanding to a larger online audience. “We thought, y’know, we go through all that and what do we do with it? Not much. So we thought, y’know, let’s invite some folks that aren’t familiar with ranching to just tour the pasture award winner and explain to them what we do, why we do it and how we do it,” he said. “But we’re not explaining it, we’re not doing it as ranchers … we’re letting third parties explain it. During several tour stops throughout the day, experts, mainly from Montana State University, explain what elements make the ranch an award winner. At rangeland stops, range specialists will explain what people are seeing that makes this an exemplary pasture, and same for water ways with fisheries and water experts, especially if there has been reclamation or regeneration work, he said. “We’ve found that quite effective,” Steinbeisser added. “It’s not just saying, ‘Hey, look how good we are.’ It’s other people explaining in more detail what’s going on there, and why it’s important to them and to everybody. “I think as we get better at it, I think it will help us in the long run as far as marketing beef, too,” he said. “Consumers want to be confident in what they’re buying.”