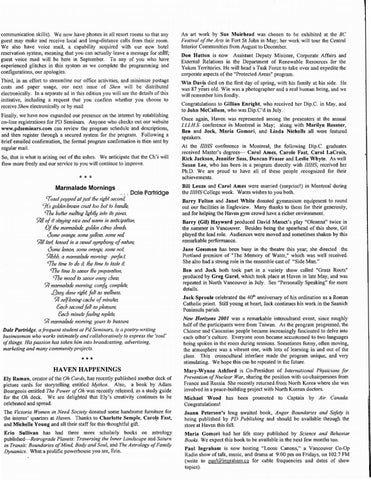 communication skills). We now have phones in all resort rooms so that any guest may make and receive local and long-distance calls from their room. We also have voice mail, a capability acquired with our new hotel reservation system, meaning that you can actually leave a message for stdff; guest voice mail will be here in September. To any of you who have experienced glitches in this system as we complete the programming and configurations, our apologies. Third, in an effort to streamline our office activities, and minimize postage costs and paper usage, our next issue of Shen will be distributed electronically. In a separate ad in this edition you will see the details of this initiative, including a request that you confirm whether you choose to receive Shen electronically or by mail Finally, we have now expanded our presence on the internet by establishing on-line registrations for PD Seminars. Anyone who checks out our website www.pdseminars.com can review the program schedule and descriptions, and then register through a secured system for the program. Following a brief emailed confirmation, the formal program confirmation is then sent by regular mail. So, that is what is arising out of the ashes. We anticipate that the Ch'i will flow more freely and our service to you will continue to improve.

&ch minute fooling replete. 9l marmalade morning. yours lo treasure. Dale Partridge, a frequent student at Pd Seminars, is a poetry-writing businessman who work'> intimately and collaboratively to express the 'soul' of things. His passion has taken him into broadcasting, advertising, marketing and many community projects.

*** HAVEN HAPPENINGS Ely Raman, creator of the Oh Cards, has recently published another deck of picture cards for storytelling entitled Mythos. Also, a book by Adam Bourgeois entitled The Power ofOh was recently released, as a study guide for the Oh deck. We are delighted that Ely's creativity continues to be celebrated and spread.

An art work by Sue Muirhead was chosen to be exhibited at the BC Festival of the Arts in Fort StJohn in May; her work will tour the Central Interior Communities from August to December. Don Hutton is now Assistant Deputy Minister, Corporate Affairs and External Relations in the Department of Renewable Resources for the Yukon Territories. He will head a Task Force to take over and expedite the corporate aspects of the "Protected Areas" program. Win Davis died on the first day of spring, with his family at his side. He was 87 years old. Win was a photographer and a real human being, and we will remember him fondly. Congratulations to Gillian Enright, who received her Dip.C. in May, and to John McCallum, who was Dip.C'd in July. Once again, Haven was represented among the presenters at the annual I.l.I.H.S conference in Montreal in May; along with Marilyn Rossner, Ben and Jock, Maria Gomori, and Linda Nicholls all were featured speakers. At the IIIHS conference in Montreal, the following Dip.C. graduates received Master's degrees- Carol Ames, Carole Fast, Carol LaCroix, Rick Jackson, Jennifer Sass, Duncan Fraser and Leslie Whyte. As well Susan Lee, who has been in a program directly with ll/HS, received her Ph.D. We are proud to have all of these people recognized for their achievements.

Bill Leuze and Carol Ames were married (surprise!) in Montreal during the IIIHS College week. Warm wishes to you both . Barry Fulton and Janet White donated gymnasium equipment to round out our facilities in Eagleview. Many thanks to them for their generosity, and for helping the Haven gym crowd have a richer environment. Barry (Gil) Hayward produced David Mamet's play "Oleanna" twice in the summer in Vancouver. Besides being the spearhead of this show, Gil played the lead role. Audiences were moved and sometimes shaken by this remarkable performance. Jane Geesman has been busy in the theatre this year; she directed the Portland premiere of 01 The Memory of Water," which was well received. She also had a strong role in the ensemble cast of "Side Man.'' Ben and Jock both took part in a variety show called "Grass Roots" produced by Greg Gurel, which took place at Haven in late May, and was repeated in North Vancouver in July. See "Personally Speaking" for more details. Jack Sproule celebrated the 40th anniversary of his ordination as a Roman Catholic priest. Still young at heart, Jack continues his work in the Saanich Peninsula parish. New Horizons 2001 was a remarkable intercultural event, since roughly half of the participants were from Taiwan. As the program progressed, the Chinese and Caucasian people became increasingly fascinated to delve into each other's culture. Everyone soon became accustomed to two languages being spoken in the room during sessions. Sometimes funny, often moving, the atmosphere was a vibrant one, with lots of learning in and out of the s:;lass. This crosscultural interface made the program unique, and very stimulating. We hope this can be repeated in the future.

Mary-Wynne Ashford is Co-President of International Physicians for Prevention of Nuclear War, sharing the position with co-chairpersons from France and Russia. She recently returned from North Korea where she was involved in a peace-building project with North Korean doctors. Michael Wood has been promoted to Captain by Air Canada. Congratulations!

The Victoria Women in Need Society donated some handsome furniture for the interns' quarters at Haven. Thanks to Charlotte Semple, Carol,e Fast, and Michelle Young and all their staff for this thoughtful gift.

Joann Peterson's long awaited book, Anger Boundaries and Safety is being published by PD Publishing and should be available through the store at Haven this fall.

Erin Sullivan has had three more scholarly books on astrology published-Retrograde Planets: Traversing the Inner Landscape and Saturn in Transit: Boundaries of Mind, Body and Soul, and The Astrology of Family Dynamics. What a prolific powerhouse you are, Erin.

Maria Gomori had her life story published by Science and Behavior Books. We expect this book to be available in the next few months too. Paul Ingraham is now hosting "Loose Canons," a Vancouver Co-Op Radio show of talk, music, and drama at 9:00pm on Fridays, on 102.7 FM (write to paulrll:ingrailam.ca for cable frequencies and dates of show topics). 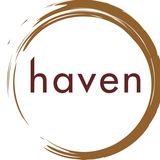