The Ultimate Guide to the 2021 Haute Route Dolomites 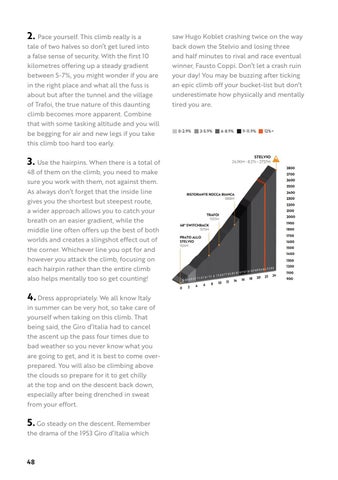 2. Pace yourself. This climb really is a

tale of two halves so don’t get lured into a false sense of security. With the first 10 kilometres offering up a steady gradient between 5-7%, you might wonder if you are in the right place and what all the fuss is about but after the tunnel and the village of Trafoi, the true nature of this daunting climb becomes more apparent. Combine that with some tasking altitude and you will be begging for air and new legs if you take this climb too hard too early.

3. Use the hairpins. When there is a total of 48 of them on the climb, you need to make sure you work with them, not against them. As always don’t forget that the inside line gives you the shortest but steepest route, a wider approach allows you to catch your breath on an easier gradient, while the middle line often offers up the best of both worlds and creates a slingshot effect out of the corner. Whichever line you opt for and however you attack the climb, focusing on each hairpin rather than the entire climb also helps mentally too so get counting!

4. Dress appropriately. We all know Italy in summer can be very hot, so take care of yourself when taking on this climb. That being said, the Giro d’Italia had to cancel the ascent up the pass four times due to bad weather so you never know what you are going to get, and it is best to come overprepared. You will also be climbing above the clouds so prepare for it to get chilly at the top and on the descent back down, especially after being drenched in sweat from your effort. 5. Go steady on the descent. Remember the drama of the 1953 Giro d’Italia which

saw Hugo Koblet crashing twice on the way back down the Stelvio and losing three and half minutes to rival and race eventual winner, Fausto Coppi. Don’t let a crash ruin your day! You may be buzzing after ticking an epic climb off your bucket-list but don’t underestimate how physically and mentally tired you are.

The Ultimate Guide to the 2021 Haute Route Dolomites

Stunning, steep, and legendary, the iconic climbs in the Dolomites draw cyclists from all over the globe. With the Haute Route Dolomites, you'll have the unique opportunity to pin on a number, test yourself, and compete with and against friends for bragging rights on some of the most famous cycling climbs in the world. Featuring three legendary summit finishes and unforgettable climbs above 2,000 metres – including the mighty Passo Giau, the infamous Tre Cime di Lavaredo, as well as Passo Pordoï and Passo Sella – it is your turn to experience this bucket-list destination and be part of an unforgettable event. Get all the inside information in the Ultimate Guide to the 2021 Haute Route Dolomites.