From the Depths, Summer 2012: A Literary Journal 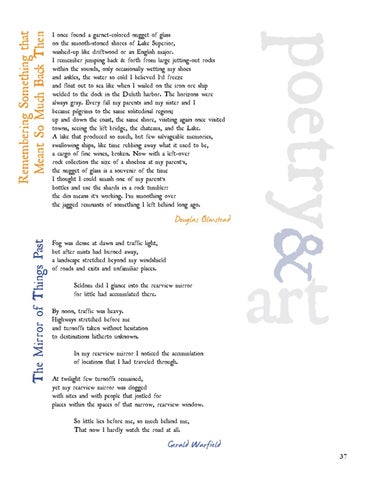 Douglas Olmstead Fog was dense at dawn and traffic light, but after mists had burned away, a landscape stretched beyond my windshield of roads and exits and unfamiliar places. Seldom did I glance into the rearview mirror for little had accumulated there. By noon, traffic was heavy. Highways stretched before me and turnoffs taken without hesitation to destinations hitherto unknown. In my rearview mirror I noticed the accumulation of locations that I had traveled through.

I once found a garnet-colored nugget of glass on the smooth-stoned shores of Lake Superior, washed-up like driftwood or an English major. I remember jumping back &amp; forth from large jutting-out rocks within the sounds, only occasionally wetting my shoes and ankles, the water so cold I believed I’d freeze and float out to sea like when I wailed on the iron ore ship welded to the dock in the Duluth harbor. The horizons were always gray. Every fall my parents and my sister and I became pilgrims to the same solitudinal region; up and down the coast, the same shore, visiting again once visited towns, seeing the lift bridge, the chateaus, and the Lake. A lake that produced so much, but few salvageable memories, swallowing ships, like time rubbing away what it used to be, a cargo of fine wines, broken. Now with a left-over rock collection the size of a shoebox at my parent’s, the nugget of glass is a souvenir of the time I thought I could smash one of my parent’s bottles and use the shards in a rock tumbler: the din means it’s working. I’m smoothing over the jagged remnants of something I left behind long ago.

At twilight few turnoffs remained, yet my rearview mirror was clogged with sites and with people that jostled for places within the spaces of that narrow, rearview window. So little lies before me, so much behind me, That now I hardly watch the road at all.

From the Depths, Summer 2012: A Literary Journal

From the Depths is a quarterly literary journal from Haunted Waters Press featuring works of prose, creative nonfiction and poetry. Issues are released in the months of March, June, September, and December on the internet, and periodically in print form. 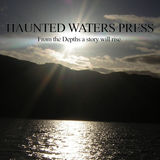