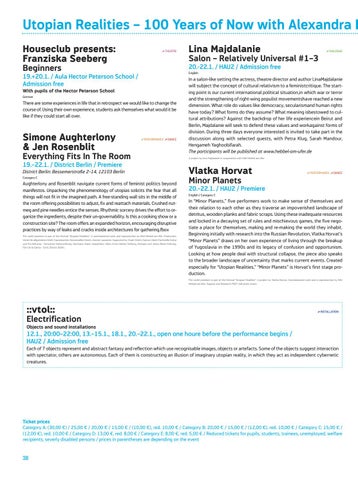 There are some experiences in life that in retrospect we would like to change the course of. Using their own experience, students ask themselves what would it be like if they could start all over.

Aughterlony and Rosenblit navigate current forms of feminist politics beyond manifestos. Unpacking the phenomenology of utopias solicits the fear that all things will not fit in the imagined path. A free-standing wall sits in the middle of the room offering possibilities to adjust, fix and reattach materials. Crushed nutmeg and pine needles entice the senses. Rhythmic sorcery drives the effort to organize the ingredients, despite their un-governability. Is this a cooking show or a construction site? The room offers an expanded horizon, encouraging disruptive practices by way of leaks and cracks inside architectures for gathering.fbox The world premiere is part of the festival “Utopian Realities”. A commissioned work and coproduction by HAU Hebbel am Ufer. Production: Verein für allgemeines Wohl. Coproduction: Gessnerallee Zürich, Arsenic Lausanne. Supported by: Stadt Zürich, Kanton Zürich Fachstelle Kultur und Pro Helvetia – Schweizer Kulturstiftung, Tanzhaus Zürich, ImpulsTanz Wien, Ernst Göhner Stiftung, Georges und Jenny Bloch-Stiftung, Fête de la Danse – Genf, District Berlin.

In a salon-like setting the actress, theatre director and author LinaMajdalanie will subject the concept of cultural relativism to a feministcritique. The starting point is our current international political situation,in which war or terror and the strengthening of right-wing populist movementshave reached a new dimension. What role do values like democracy, secularismand human rights have today? What forms do they assume? What meaning isbestowed to cultural attributions? Against the backdrop of her life experiencein Beirut and Berlin, Majdalanie will seek to defend these values and workagainst forms of division. During three days everyone interested is invited to take part in the discussion along with selected guests, with Petra Klug, Sarah Mandour, Hengameh Yaghoobifarah. The participants will be published at www.hebbel-am-ufer.de A project by Lina Majdalanie in cooperation with HAU Hebbel am Ufer.

In “Minor Planets,” five performers work to make sense of themselves and their relation to each other as they traverse an impoverished landscape of detritus, wooden planks and fabric scraps. Using these inadequate resources and locked in a decaying set of rules and mischievous games, the five negotiate a place for themselves, making and re-making the world they inhabit. Beginning initially with research into the Russian Revolution, Vlatka Horvat’s “Minor Planets” draws on her own experience of living through the breakup of Yugoslavia in the 1990s and its legacy of confusion and opportunism. Looking at how people deal with structural collapse, the piece also speaks to the broader landscape of uncertainty that marks current events. Created especially for “Utopian Realities,” “Minor Planets” is Horvat’s first stage production. The world premiere is part of the festival “Utopian Realities”. A project by Vlatka Horvat. Commissioned work and a coproduction by HAU Hebbel am Ufer. Support and Research: PACT Zollverein, Essen.

12.1., 20:00–22:00, 13.–15.1., 18.1., 20.–22.1., open one houre before the performance begins / HAU2 / Admission free Each of 7 objects represent and abstract fantasy and reflection which use recognisable images, objects or artefacts. Some of the objects suggest interaction with spectator, others are autonomous. Each of them is constructing an illusion of imaginary utopian reality, in which they act as independent cybernetic creatures.

A publication by HAU Hebbel am Ufer for the Festival “Utopian Realities – 100 Years of Now with Alexandra Kollontai“ (12.–22.1.2017). With text by the artists Marina Davydova, Vera Martynov, Simone Aughterlony and Jen Rosenblit, an introductory text by HAU director Annemie Vanackere, conversations with Lina Majdalanie, Mariano Pensotti and Vlatka Horvat and texts by Gisela Motz and Alex Demirović.