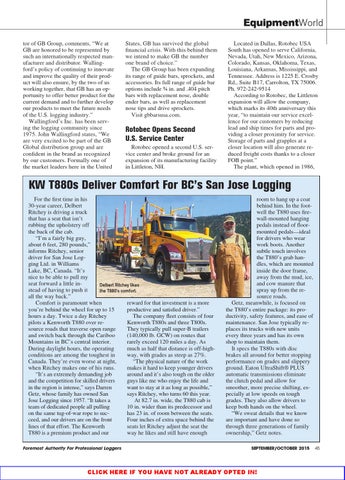 EquipmentWorld tor of GB Group, comments, “We at GB are honored to be represented by such an internationally respected manufacturer and distributor. Wallingford’s policy of continuing to innovate and improve the quality of their product will also ensure, by the two of us working together, that GB has an opportunity to offer better product for the current demand and to further develop our products to meet the future needs of the U.S. logging industry.” Wallingford’s Inc. has been serving the logging community since 1975. John Wallingford states, “We are very excited to be part of the GB Global distribution group and are confident in the brand as recognized by our customers. Formally one of the market leaders here in the United

States, GB has survived the global financial crisis. With this behind them we intend to make GB the number one brand of choice.” The GB Group has been expanding its range of guide bars, sprockets, and accessories. Its full range of guide bar options include ¾ in. and .404 pitch bars with replacement nose, double ender bars, as well as replacement nose tips and drive sprockets. Visit gbbarsusa.com.

Located in Dallas, Rotobec USA South has opened to serve California, Nevada, Utah, New Mexico, Arizona, Colorado, Kansas, Oklahoma, Texas, Louisiana, Arkansas, Mississippi, and Tennessee. Address is 1225 E. Crosby Rd., Suite B17, Carrolton, TX 75006. Ph. 972-242-9514 According to Rotobec, the Littleton expansion will allow the company, which marks its 40th anniversary this year, “to maintain our service excellence for our customers by reducing lead and ship times for parts and providing a closer proximity for service. Storage of parts and grapples at a closer location will also generate reduced freight costs thanks to a closer FOB point.” The plant, which opened in 1986,

KW T880s Deliver Comfort For BC’s San Jose Logging For the first time in his 30-year career, Delbert Ritchey is driving a truck that has a seat that isn’t rubbing the upholstery off the back of the cab. “I’m a fairly big guy, about 6 feet, 280 pounds,” informs Ritchey, senior driver for San Jose Logging Ltd. in Williams Lake, BC, Canada. “It’s nice to be able to pull my seat forward a little inDelbert Ritchey likes stead of having to push it the T880’s comfort. all the way back.” Comfort is paramount when reward for that investment is a more you’re behind the wheel for up to 15 productive and satisfied driver.” hours a day. Twice a day Ritchey The company fleet consists of four pilots a Kenworth T880 over reKenworth T880s and three T800s. source roads that traverse open range They typically pull super-B trailers and switch back through the Cariboo (140,000 lb. GCW) on routes that Mountains in BC’s central interior. rarely exceed 120 miles a day. As During daylight hours, the operating much as half that distance is off-highconditions are among the toughest in way, with grades as steep as 27%. Canada. They’re even worse at night, “The physical nature of the work when Ritchey makes one of his runs. makes it hard to keep younger drivers “It’s an extremely demanding job around and it’s also tough on the older and the competition for skilled drivers guys like me who enjoy the life and in the region is intense,” says Darren want to stay at it as long as possible,” Getz, whose family has owned San says Ritchey, who turns 60 this year. Jose Logging since 1957. “It takes a At 82.7 in. wide, the T880 cab is team of dedicated people all pulling 10 in. wider than its predecessor and on the same tug-of-war rope to suchas 23 in. of room between the seats. ceed, and our drivers are on the front Four inches of extra space behind the lines of that effort. The Kenworth seats let Ritchey adjust the seat the T880 is a premium product and our way he likes and still have enough Foremost Authority For Professional Loggers

room to hang up a coat behind him. In the footwell the T880 uses firewall-mounted hanging pedals instead of floormounted pedals—ideal for drivers who wear work boots. Another subtle touch involves the T880’s grab handles, which are mounted inside the door frame, away from the mud, ice, and cow manure that spray up from the resource roads. Getz, meanwhile, is focused on the T880’s entire package: its productivity, safety features, and ease of maintenance. San Jose typically replaces its trucks with new units every three years and has its own shop to maintain them. It specs the T880s with disc brakes all around for better stopping performance on grades and slippery ground. Eaton UltraShift® PLUS automatic transmissions eliminate the clutch pedal and allow for smoother, more precise shifting, especially at low speeds on tough grades. They also allow drivers to keep both hands on the wheel. “We sweat details that we know are important and have done so through three generations of family ownership,” Getz notes. SEPTEMBER/OCTOBER 2015

CLICK HERE IF YOU HAVE NOT ALREADY OPTED IN! THoct15pgs_SS.indd 45