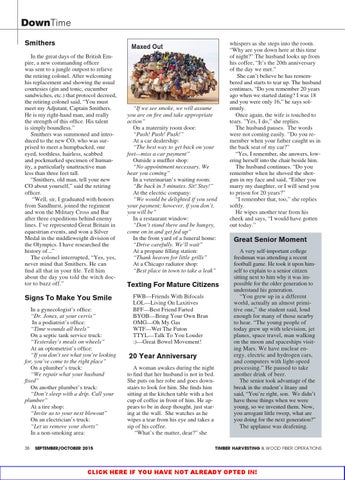 In the great days of the British Empire, a new commanding officer was sent to a jungle outpost to relieve the retiring colonel. After welcoming his replacement and showing the usual courtesies (gin and tonic, cucumber sandwiches, etc.) that protocol decreed, the retiring colonel said, “You must meet my Adjutant, Captain Smithers. He is my right-hand man, and really the strength of this office. His talent is simply boundless.” Smithers was summoned and introduced to the new CO, who was surprised to meet a humpbacked, one eyed, toothless, hairless, scabbed and pockmarked specimen of humanity, a particularly unattractive man less than three feet tall. “Smithers, old man, tell your new CO about yourself,” said the retiring officer. “Well, sir, I graduated with honors from Sandhurst, joined the regiment and won the Military Cross and Bar after three expeditions behind enemy lines. I’ve represented Great Britain in equestrian events, and won a Silver Medal in the middleweight division of the Olympics. I have researched the history of...” The colonel interrupted, “Yes, yes, never mind that Smithers. He can find all that in your file. Tell him about the day you told the witch doctor to buzz off.”

Signs To Make You Smile In a gynecologist’s office: “Dr. Jones, at your cervix” In a podiatrist’s office: “Time wounds all heels” On a septic tank service truck: “Yesterday’s meals on wheels” At an optometrist’s office: “If you don’t see what you’re looking for, you’ve come to the right place” On a plumber’s truck: “We repair what your husband fixed” On another plumber’s truck: “Don’t sleep with a drip. Call your plumber” At a tire shop: “Invite us to your next blowout” On an electrician’s truck: “Let us remove your shorts” In a non-smoking area: 38

“If we see smoke, we will assume you are on fire and take appropriate action” On a maternity room door: “Push! Push! Push!” At a car dealership: “The best way to get back on your feet—miss a car payment” Outside a muffler shop: “No appointment necessary. We hear you coming” In a veterinarian’s waiting room: “Be back in 5 minutes. Sit! Stay!” At the electric company: “We would be delighted if you send your payment; however, if you don’t, you will be” In a restaurant window: “Don’t stand there and be hungry, come on in and get fed up” In the front yard of a funeral home: “Drive carefully. We’ll wait” At a propane filling station: “Thank heaven for little grills” At a Chicago radiator shop: “Best place in town to take a leak”

20 Year Anniversary A woman awakes during the night to find that her husband is not in bed. She puts on her robe and goes downstairs to look for him. She finds him sitting at the kitchen table with a hot cup of coffee in front of him. He appears to be in deep thought, just staring at the wall. She watches as he wipes a tear from his eye and takes a sip of his coffee. “What’s the matter, dear?” she

whispers as she steps into the room. “Why are you down here at this time of night?” The husband looks up from his coffee, “It’s the 20th anniversary of the day we met.” She can’t believe he has remembered and starts to tear up. The husband continues, “Do you remember 20 years ago when we started dating? I was 18 and you were only 16,” he says solemnly. Once again, the wife is touched to tears. ”Yes, I do,” she replies. The husband pauses. The words were not coming easily. ”Do you remember when your father caught us in the back seat of my car?” “Yes, I remember, she answers, lowering herself into the chair beside him. The husband continues. “Do you remember when he shoved the shotgun in my face and said, “Either you marry my daughter, or I will send you to prison for 20 years?” “I remember that, too,” she replies softly. He wipes another tear from his cheek and says, “I would have gotten out today.”

Great Senior Moment A very self-important college freshman was attending a recent football game. He took it upon himself to explain to a senior citizen sitting next to him why it was impossible for the older generation to understand his generation. “You grew up in a different world, actually an almost primitive one,” the student said, loud enough for many of those nearby to hear. “The young people of today grew up with television, jet planes, space travel, man walking on the moon and spaceships visiting Mars. We have nuclear energy, electric and hydrogen cars, and computers with light-speed processing.” He paused to take another drink of beer. The senior took advantage of the break in the student’s litany and said, “You’re right, son. We didn’t have those things when we were young, so we invented them. Now, you arrogant little twerp, what are you doing for the next generation?” The applause was deafening.

CLICK HERE IF YOU HAVE NOT ALREADY OPTED IN! THoct15pgs_SS.indd 38