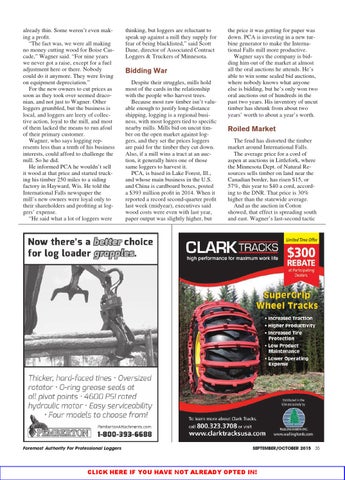 already thin. Some weren’t even making a profit. “The fact was, we were all making no money cutting wood for Boise Cascade,” Wagner said. “For nine years we never got a raise, except for a fuel adjustment here or there. Nobody could do it anymore. They were living on equipment depreciation.” For the new owners to cut prices as soon as they took over seemed draconian, and not just to Wagner. Other loggers grumbled, but the business is local, and loggers are leery of collective action, loyal to the mill, and most of them lacked the means to run afoul of their primary customer. Wagner, who says logging represents less than a tenth of his business interests, could afford to challenge the mill. So he did. He informed PCA he wouldn’t sell it wood at that price and started trucking his timber 250 miles to a siding factory in Hayward, Wis. He told the International Falls newspaper the mill’s new owners were loyal only to their shareholders and profiting at loggers’ expense. “He said what a lot of loggers were

thinking, but loggers are reluctant to speak up against a mill they supply for fear of being blacklisted,” said Scott Dane, director of Associated Contract Loggers & Truckers of Minnesota.

Bidding War Despite their struggles, mills hold most of the cards in the relationship with the people who harvest trees. Because most raw timber isn’t valuable enough to justify long-distance shipping, logging is a regional business, with most loggers tied to specific nearby mills. Mills bid on uncut timber on the open market against loggers, and they set the prices loggers are paid for the timber they cut down. Also, if a mill wins a tract at an auction, it generally hires one of those same loggers to harvest it. PCA, is based in Lake Forest, Ill., and whose main business in the U.S. and China is cardboard boxes, posted a $393 million profit in 2014. When it reported a record second-quarter profit last week (midyear), executives said wood costs were even with last year, paper output was slightly higher, but

the price it was getting for paper was down. PCA is investing in a new turbine generator to make the International Falls mill more productive. Wagner says the company is bidding him out of the market at almost all the oral auctions he attends. He’s able to win some sealed bid auctions, where nobody knows what anyone else is bidding, but he’s only won two oral auctions out of hundreds in the past two years. His inventory of uncut timber has shrunk from about two years’ worth to about a year’s worth.

Roiled Market The feud has distorted the timber market around International Falls. The average price for a cord of aspen at auctions in Littlefork, where the Minnesota Dept. of Natural Resources sells timber on land near the Canadian border, has risen $15, or 57%, this year to $40 a cord, according to the DNR. That price is 30% higher than the statewide average. And as the auction in Cotton showed, that effect is spreading south and east. Wagner’s last-second tactic

CLICK HERE IF YOU HAVE NOT ALREADY OPTED IN! THseptoct15pg_cs.indd 35