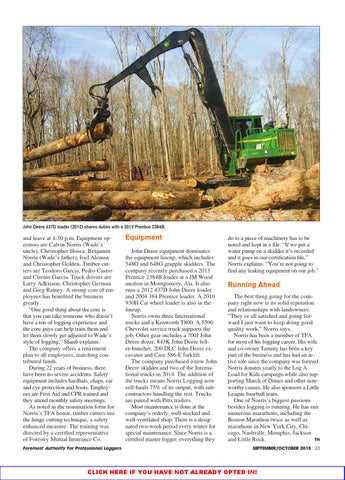 and leave at 4:30 p.m. Equipment operators are Calvin Norris (Wade’s uncle), Christopher Hosea, Benjamin Norris (Wade’s father), Joel Aleman and Christopher Golden. Timber cutters are Teodoro Garcia, Pedro Castro and Cirenio Garcia. Truck drivers are Larry Adkisson, Christopher German and Greg Rainey. A strong core of employees has benefited the business greatly. “One good thing about the core is that you can take someone who doesn’t have a ton of logging experience and the core guys can help train them and let them slowly get adjusted to Wade’s style of logging,” Shaub explains. The company offers a retirement plan to all employees, matching contributed funds. During 22 years of business, there have been no severe accidents. Safety equipment includes hardhats, chaps, ear and eye protection and boots. Employees are First Aid and CPR trained and they attend monthly safety meetings. As noted in the nomination form for Norris’s TFA honor, timber cutters use the hinge cutting technique, a safety enhanced measure. The training was directed by a certified representative of Forestry Mutual Insurance Co. Foremost Authority For Professional Loggers 

Equipment John Deere equipment dominates the equipment lineup, which includes 548G and 648G grapple skidders. The company recently purchased a 2013 Prentice 2384B loader at a JM Wood auction in Montgomery, Ala. It also runs a 2012 437D John Deere loader and 2004 384 Prentice loader. A 2010 930H Cat wheel loader is also in the lineup. Norris owns three International trucks and a Kenworth T800. A 5500 Chevrolet service truck supports the job. Other gear includes a 700J John Deere dozer, 843K John Deere feller-buncher, 200 DLC John Deere excavator and Case 586-E forklift. The company purchased a new John Deere skidder and two of the International trucks in 2014. The addition of the trucks means Norris Logging now self-hauls 75% of its output, with subcontractors handling the rest. Trucks are paired with Pitts trailers Most maintenance is done at the company’s orderly, well-stocked and well-ventilated shop. There is a designated two-week period every winter for special maintenance. Since Norris is a certified master logger, everything they

do to a piece of machinery has to be noted and kept in a file. “If we put a water pump on a skidder it’s recorded and it goes in our certification file,” Norris explains. “You’re not going to find any leaking equipment on our job.”

Running Ahead The best thing going for the company right now is its solid reputation and relationships with landowners. “They’re all satisfied and going forward I just want to keep doing good quality work,” Norris says. Norris has been a member of TFA for most of his logging career. His wife and co-owner Tammy has been a key part of the business and has had an active role since the company was formed. Norris donates yearly to the Log A Load for Kids campaign while also supporting March of Dimes and other noteworthy causes. He also sponsors a Little League baseball team. One of Norris’s biggest passions besides logging is running. He has run numerous marathons, including the Boston Marathon twice as well as marathons in New York City, Chicago, Nashville, Memphis, Jackson and Little Rock. TH SEPTEMBER/OCTOBER 2015 23

CLICK HERE IF YOU HAVE NOT ALREADY OPTED IN! THseptoct15pg_cs.indd 23