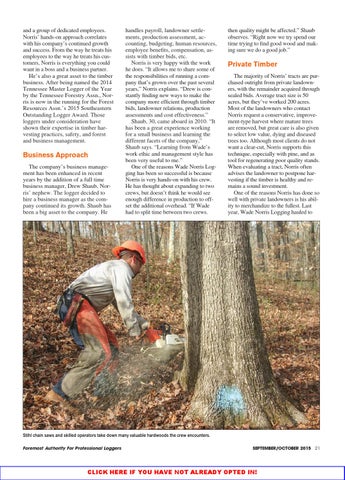 and a group of dedicated employees. Norris’ hands-on approach correlates with his company’s continued growth and success. From the way he treats his employees to the way he treats his customers, Norris is everything you could want in a boss and a business partner. He’s also a great asset to the timber business. After being named the 2014 Tennessee Master Logger of the Year by the Tennessee Forestry Assn., Norris is now in the running for the Forest Resources Assn.’s 2015 Southeastern Outstanding Logger Award. Those loggers under consideration have shown their expertise in timber harvesting practices, safety, and forest and business management.

handles payroll, landowner settlements, production assessment, accounting, budgeting, human resources, employee benefits, compensation, assists with timber bids, etc. Norris is very happy with the work he does. “It allows me to share some of the responsibilities of running a company that’s grown over the past several years,” Norris explains. “Drew is constantly finding new ways to make the company more efficient through timber bids, landowner relations, production assessments and cost effectiveness.” Shaub, 30, came aboard in 2010. “It has been a great experience working for a small business and learning the different facets of the company,” Shaub says. “Learning from Wade’s work ethic and management style has been very useful to me.” One of the reasons Wade Norris Logging has been so successful is because Norris is very hands-on with his crew. He has thought about expanding to two crews, but doesn’t think he would see enough difference in production to offset the additional overhead. “If Wade had to split time between two crews.

then quality might be affected.” Shaub observes. “Right now we try spend our time trying to find good wood and making sure we do a good job.”

Private Timber The majority of Norris’ tracts are purchased outright from private landowners, with the remainder acquired through sealed bids. Average tract size is 50 acres, but they’ve worked 200 acres. Most of the landowners who contact Norris request a conservative, improvement-type harvest where mature trees are removed, but great care is also given to select low value, dying and diseased trees too. Although most clients do not want a clear-cut, Norris supports this technique, especially with pine, and as tool for regenerating poor quality stands. When evaluating a tract, Norris often advises the landowner to postpone harvesting if the timber is healthy and remains a sound investment. One of the reasons Norris has done so well with private landowners is his ability to merchandize to the fullest. Last year, Wade Norris Logging hauled to

CLICK HERE IF YOU HAVE NOT ALREADY OPTED IN! THseptoct15pg_cs.indd 21