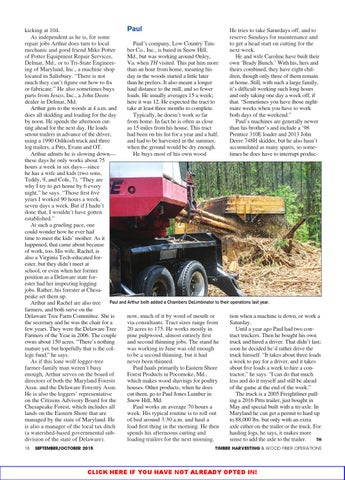 Paul kicking at 104. He tries to take Saturdays off, and to As independent as he is, for some reserve Sundays for maintenance and repair jobs Arthur does turn to local Paul’s company, Low Country Timto get a head start on cutting for the mechanic and good friend Mike Potter ber Co., Inc., is based in Snow Hill, next week. of Potter Equipment Repair Services, Md., but was working around Onley, He and wife Caroline have built their Delmar, Md., or to Tri-State EngineerVa. when TH visited. This put him more own ‘Brady Bunch.’ With his, hers and ing of Maryland, Inc., a machine shop than an hour from home, meaning his theirs combined, they have eight chillocated in Salisbury. “There is not day in the woods started a little later dren, though only three of them remain much they can’t figure out how to fix than he prefers. It also meant a longer at home. Still, with such a large family, or fabricate.” He also sometimes buys haul distance to the mill, and so fewer it’s difficult working such long hours parts from Jesco, Inc., a John Deere loads. He usually averages 15 a week; and only taking one day a week off, if dealer in Delmar, Md. here it was 12. He expected the tract to that. “Sometimes you have those nightArthur gets to the woods at 4 a.m. and take at least three months to complete. mare weeks when you have to work does all skidding and loading for the day Typically, he doesn’t work so far both days of the weekend.” by noon. He spends the afternoon cutfrom home. In fact he is often as close Paul’s machines are generally newer ting ahead for the next day. He loads as 15 miles from his house. This tract than his brother’s and include a ’98 setout trailers in advance of the driver, had been on his list for a year and a half, Prentice 310E loader and 2013 John using a 1990 Oshkosh truck and three and had to be harvested in the summer, Deere 748H skidder, but he also hasn’t log trailers, a Pitts, Evans and OT. when the ground would be dry enough. accumulated as many spares, so someArthur admits he is slowing down— He buys most of his own wood times he does have to interrupt producthese days he only works about 75 hours a week in six days—since he has a wife and kids (two sons, Teddy, 9, and Cole, 7). “They are why I try to get home by 6 every night,” he says. “Those first five years I worked 90 hours a week, seven days a week. But if I hadn’t done that, I wouldn’t have gotten established.” At such a grueling pace, one could wonder how he ever had time to meet the kids’ mother. As it happened, that came about because of work, too. His wife, Rachel, is also a Virginia Tech-educated forester, but they didn’t meet at school, or even when her former position as a Delaware state forester had her inspecting logging jobs. Rather, his forester at Chesapeake set them up. Arthur and Rachel are also tree Paul and Arthur both added a Chambers DeLimbinator to their operations last year. farmers, and both serve on the now, much of it by word of mouth or tion when a machine is down, or work a Delaware Tree Farm Committee. She is via consultants. Tract sizes range from Saturday. the secretary and he was the chair for a 20 acres to 175. He works mostly in Until a year ago Paul had two confew years. They were the Delaware Tree pine pulpwood, almost entirely first tract truckers. Then he bought his own Farmers of the Year in 2006. The couple and second thinning jobs. The stand he truck and hired a driver. That didn’t last; owns about 150 acres. “There’s nothing was working in June was old enough soon he decided he’d rather drive the mature yet, but hopefully that is the colto be a second thinning, but it had truck himself. “It takes about three loads lege fund,” he says. never been thinned. a week to pay for a driver, and it takes As if this lone wolf logger-tree Paul hauls primarily to Eastern Shore about five loads a week to hire a confarmer-family man weren’t busy Forest Products in Pocomoke, Md., tractor,” he says. “I can do that much enough, Arthur serves on the board of which makes wood shavings for poultry less and do it myself and still be ahead directors of both the Maryland Forests houses. Other products, when he does of the game at the end of the week.” Assn. and the Delaware Forestry Assn. cut them, go to Paul Jones Lumber in The truck is a 2005 Freightliner pullHe is also the loggers’ representative Snow Hill, Md. ing a 2016 Pitts trailer, just bought in on the Citizens Advisory Board for the Paul works an average 70 hours a May and special built with a tri-axle. In Chesapeake Forest, which includes all week. His typical routine is to roll out Maryland he can get a permit to haul up lands on the Eastern Shore that are of bed around 3:30 a.m. and haul a managed by the state of Maryland. He to 88,000 lbs. but only with an extra load first thing in the morning. He then is also a manager of the local tax ditch axle either on the trailer or the truck. For spends his afternoons cutting and hauling logs, he says, it makes more (a watershed-based governmental subTH loading trailers for the next morning. division of the state of Delaware). sense to add the axle to the trailer. 18

CLICK HERE IF YOU HAVE NOT ALREADY OPTED IN! THseptoct15pg_cs.indd 18