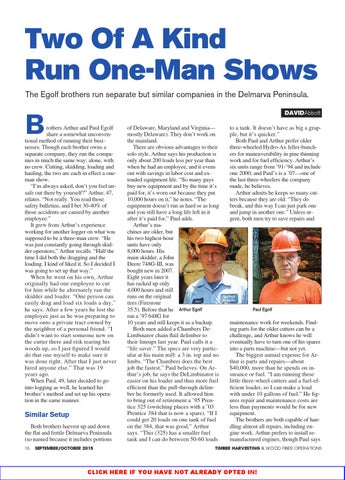 Two Of A Kind Run One-Man Shows The Egolf brothers run separate but similar companies in the Delmarva Peninsula.

rothers Arthur and Paul Egolf share a somewhat unconventional method of running their businesses. Though each brother owns a separate company, they run the companies in much the same way: alone, with no crew. Cutting, skidding, loading and hauling, the two are each in effect a oneman show. “I’m always asked, don’t you feel unsafe out there by yourself?” Arthur, 47, relates. “Not really. You read those safety bulletins, and I bet 30-40% of those accidents are caused by another employee.” It grew from Arthur’s experience working for another logger on what was supposed to be a three-man crew. “He was just constantly going through skidder operators,” Arthur recalls. “Half the time I did both the dragging and the loading. I kind of liked it. So I decided I was going to set up that way.” When he went on his own, Arthur originally had one employee to cut for him while he alternately ran the skidder and loader. “One person can easily drag and load six loads a day,” he says. After a few years he lost the employee just as he was preparing to move onto a private tract owned by the neighbor of a personal friend. “I didn’t want to start someone new on the cutter there and risk tearing his woods up, so I just figured I would do that one myself to make sure it was done right. After that I just never hired anyone else.” That was 19 years ago. When Paul, 49, later decided to go into logging as well, he learned his brother’s method and set up his operation in the same manner.

of Delaware, Maryland and Virginia— mostly Delaware). They don’t work on the mainland. There are obvious advantages to their solo style. Arthur says his production is only about 200 loads less per year than when he had an employee, and it evens out with savings in labor cost and extended equipment life. “So many guys buy new equipment and by the time it’s paid for, it’s worn out because they put 10,000 hours on it,” he notes. “The equipment doesn’t run as hard or as long and you still have a long life left in it after it’s paid for,” Paul adds. Arthur’s machines are older, but his two highest-hour units have only 8,000 hours. His main skidder, a John Deere 748G-III, was bought new in 2007. Eight years later it has racked up only 4,000 hours and still runs on the original tires (Firestone 35.5). Before that he Arthur Egolf ran a ’97 648G for 10 years and still keeps it as a backup. Both men added a Chambers DeLimbinator chain flail delimber to their lineups last year. Paul calls it a “life saver.” The specs are very particular at his main mill: a 3 in. top and no limbs. “The Chambers does the best job the fastest,” Paul believes. On Arthur’s job, he says the DeLimbinator is easier on his loader and thus more fuel efficient than the pull-through delimber he formerly used. It allowed him to bring out of retirement a ’95 Prentice 325 (switching places with a ’03 Prentice 384 that is now a spare). “If I could get 20 loads on one tank of fuel on the 384, that was good,” Arthur says. “This (325) has a smaller fuel tank and I can do between 50-60 loads

to a tank. It doesn’t have as big a grapple, but it’s quicker.” Both Paul and Arthur prefer older three-wheeled Hydro-Ax feller-bunchers for maneuverability in pine thinning work and for fuel efficiency. Arthur’s six units range from ’91-’94 and include one 2000; and Paul’s is a ’07—one of the last three-wheelers the company made, he believes. Arthur admits he keeps so many cutters because they are old. “They do break, and this way I can just park one and jump in another one.” Unless urgent, both men try to save repairs and

maintenance work for weekends. Finding parts for the older cutters can be a challenge, and Arthur knows he will eventually have to turn one of his spares into a parts machine—but not yet. The biggest annual expense for Arthur is parts and repairs—about $40,000, more than he spends on insurance or fuel. “I am running these little three-wheel cutters and a fuel-efficient loader, so I can make a load with under 10 gallons of fuel.” He figures repair and maintenance costs are less than payments would be for new equipment. The brothers are both capable of handling almost all repairs, including engine work. Arthur prefers to install remanufactured engines, though Paul says

CLICK HERE IF YOU HAVE NOT ALREADY OPTED IN! THseptoct15pg_cs.indd 16