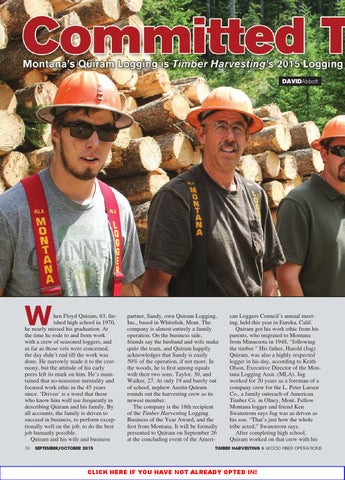 hen Floyd Quiram, 63, finished high school in 1970, he nearly missed his graduation. At the time he rode to and from work with a crew of seasoned loggers, and as far as those vets were concerned, the day didn’t end till the work was done. He narrowly made it to the ceremony, but the attitude of his early peers left its mark on him. He’s maintained that no-nonsense mentality and focused work ethic in the 45 years since. ‘Driven’ is a word that those who know him well use frequently in describing Quiram and his family. By all accounts, the family is driven to succeed in business, to perform exceptionally well on the job, to do the best job humanly possible. Quiram and his wife and business 10

partner, Sandy, own Quiram Logging, Inc., based in Whitefish, Mont. The company is almost entirely a family operation. On the business side, friends say the husband and wife make quite the team, and Quiram happily acknowledges that Sandy is easily 50% of the operation, if not more. In the woods, he is first among equals with their two sons, Taylor, 30, and Walker, 27. At only 19 and barely out of school, nephew Austin Quiram rounds out the harvesting crew as its newest member. The company is the 18th recipient of the Timber Harvesting Logging Business of the Year Award, and the first from Montana. It will be formally presented to Quiram on September 26 at the concluding event of the Ameri-

can Loggers Council’s annual meeting, held this year in Eureka, Calif. Quiram got his work ethic from his parents, who migrated to Montana from Minnesota in 1948, “following the timber.” His father, Harold (Jug) Quiram, was also a highly respected logger in his day, according to Keith Olson, Executive Director of the Montana Logging Assn. (MLA). Jug worked for 20 years as a foreman of a company crew for the L. Peter Larsen Co., a family outreach of American Timber Co. in Olney, Mont. Fellow Montana logger and friend Ken Swanstrom says Jug was as driven as his son. “That’s just how the whole tribe acted,” Swanstrom says. After completing high school, Quiram worked on that crew with his

CLICK HERE IF YOU HAVE NOT ALREADY OPTED IN! THoct15pgs_SS.indd 10