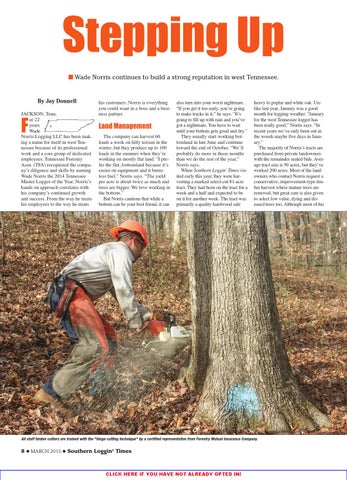 Stepping Up ■ Wade Norris continues to build a strong reputation in west Tennessee. By Jay Donnell JACKSON, Tenn. or 22 years ★ Wade Norris Logging LLC has been making a name for itself in west Tennessee because of its professional work and a core group of dedicated employees. Tennessee Forestry Assn. (TFA) recognized the company’s diligence and skills by naming Wade Norris the 2014 Tennessee Master Logger of the Year. Norris’s hands on approach correlates with his company’s continued growth and success. From the way he treats his employees to the way he treats

his customers, Norris is everything you could want in a boss and a business partner.

Land Management The company can harvest 60 loads a week on hilly terrain in the winter, but they produce up to 100 loads in the summer when they’re working on mostly flat land. “I prefer the flat, bottomland because it’s easier on equipment and it burns less fuel,” Norris says. “The yield per acre is about twice as much and trees are bigger. We love working in the bottom.” But Norris cautions that while a bottom can be your best friend, it can

also turn into your worst nightmare. “If you get it too early, you’re going to make tracks in it,” he says. “It’s going to fill up with rain and you’ve got a nightmare. You have to wait until your bottom gets good and dry.” They usually start working bottomland in late June and continue toward the end of October. “We’ll probably do more in those months than we do the rest of the year,” Norris says. When Southern Loggin’ Times visited early this year, they were harvesting a marked select-cut 81-acre tract. They had been on the tract for a week and a half and expected to be on it for another week. The tract was primarily a quality hardwood sale

heavy to poplar and white oak. Unlike last year, January was a good month for logging weather. “January for the west Tennessee logger has been really good,” Norris says. “In recent years we’ve only been out in the woods maybe five days in January.” The majority of Norris’s tracts are purchased from private landowners with the remainder sealed bids. Average tract size is 50 acres, but they’ve worked 200 acres. Most of the landowners who contact Norris request a conservative, improvement-type timber harvest where mature trees are removed, but great care is also given to select low value, dying and diseased trees too. Although most of his

All staff timber cutters are trained with the "hinge cutting technique" by a certified representative from Forestry Mutual Insurance Company.

CLICK HERE IF YOU HAVE NOT ALREADY OPTED IN!