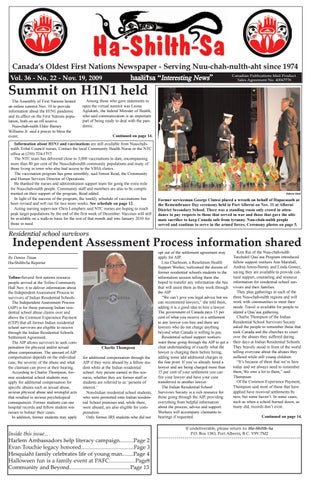 Summit on H1N1 held The Assembly of First Nations hosted an online summit Nov. 10 to provide information about the H1N1 pandemic and its affect on the First Nations population, both on an off reserve. Nuu-chah-nulth Elder Barney Williams Jr. said a prayer to bless the event.

Among those who gave statements to open the virtual summit was Leona Aglukark, the federal Minister of Health, who said communication is an important part of being ready to deal with the pandemic. Continued on page 14.

Information about H1N1 and vaccinations are still available from Nuu-chahnulth Tribal Council nurses. Contact the local Community Health Nurse or the NTC office at (250) 724-5757. The NTC team has delivered close to 3,000 vaccinations to date, encompassing more than 80 per cent of the Nuu-chah-nulth community populations and many of those living in town who also had access to the VIHA clinics. The vaccination program has gone smoothly, said Simon Read, the Community and Human Services Director of Operations. He thanked the nurses and administration support team for going the extra mile for Nuu-chah-nulth people. Community staff and members are also to be complimented on their support of the program, Read added. In light of the success of the program, the weekly schedule of vaccinations has been revised and will run for two more weeks. See schedule on page 12. Acting nursing supervisor Chris Lemphers said NTC nurses are hoping to reach peak target populations by the end of the first week of December. Vaccines will still be available on a walk-in basis for the rest of that month and into January 2010 for those in need.

Former serviceman George Clutesi placed a wreath on behalf of Hupacasath at the Remembrance Day ceremony held in Port Alberni on Nov. 11 at Alberni District Secondary School. There was a standing room only crowd in attendance to pay respects to those that served in war and those that gave the ultimate sacrifice to keep Canada safe from tyranny. Nuu-chah-nulth people served and continue to serve in the armed forces. Ceremony photos on page 5.

Independent Assessment Process information shared By Denise Titian Ha-Shilth-Sa Reporter Tofino–Several first nations resource people arrived at the Tofino Community Hall Nov. 6 to deliver information about the Independent Assessment Process to survivors of Indian Residential Schools. The Independent Assessment Process (AIP) is for those pursuing Indian residential school abuse claims over and above the Common Experience Payment (CEP) that all former Indian residential school survivors are eligible to receive through the Indian Residential Schools Settlement Agreement. The AIP allows survivors to seek compensation for physical and/or sexual abuse compensation. The amount of AIP compensation depends on the individual case, the severity of the abuse and what the claimant can prove at their hearing. According to Charlie Thompson, former residential school students may apply for additional compensation for specific abuses such as sexual abuse, serious physical abuse and wrongful acts that resulted in serious psychological consequences. Former students can use hospital records and fellow student witnesses to bolster their cases. In addition, former students may apply

Charlie Thompson for additional compensation through the AIP if they were abused by a fellow student while at the Indian residential school. Any person named in this scenario, whether they are former staff or students are referred to as ‘persons of interest.’ Non-Indian residential school students, who were permitted onto Indian tesidential School premises and, while there, were abused, are also eligible for compensation. Only former IRS students who did not

opt out of the settlement agreement may apply for AIP. Lisa Charleson, a Resolution Health Support Worker, welcomed the dozens of former residential schools students to the information session telling them she hoped to transfer any information she has that will assist them as they work through the AIP. “We can’t give you legal advice but we can recommend lawyers,” she told them, adding it is a good idea to hire a lawyer. The government of Canada pays 15 per cent of what you receive in a settlement to any lawyer you hire and there are lawyers who do not charge anything beyond what Canada is willing to pay. Residential school support workers warn those going through the AIP to get a clear understanding of exactly what the lawyer is charging them before hiring, adding some add additional charges in the fine print. If you’ve already hired a lawyer and are being charged more than 15 per cent of your settlement you can fire your lawyer and have your case transferred to another lawyer. The Indian Residential School Survivors Society is a rich resource for those going through the AIP, providing everything from helpful information about the process, advice and support. Workers will accompany claimants to hearings if requested.

Kim Rai of the Nuu-chah-nulth Teechuktl Quu’asa Program introduced fellow support workers Ann Marshall, Andrea Amos-Stoney and Linda Gomez, saying they are available to provide cultural support, counseling and resource information for residential school survivors and their families. They plan gatherings in each of the three Nuu-chah-nulth regions and will work with communities to meet their needs. Travel is available for people to attend a Quu’asa gathering. Charlie Thompson of the Indian Residential School Survivors Society asked the people to remember those that took Canada and the churches to court over the abuses they suffered during their days at Indian Residential Schools. They bravely stood in front of the world telling everyone about the abuses they suffered while still young children. “It’s because of them that we’re here today and we always need to remember them,.We owe a lot to them,” said Thompson. Of the Common Experience Payment, Thompson said most of those that have applied have received settlements by now, but some haven’t. In some cases, such as when a school burned down, as many did, records don’t exist. Continued on page 14.