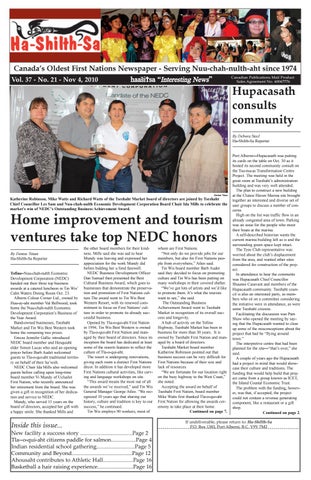 the other board members for their kindness. Mills said she was sad to hear Mundy was leaving and expressed her appreciation for the work Mundy did before bidding her a fond farewell. NEDC Business Development Officer Dan Samuel then presented the Best Cultural Business Award, which goes to businesses that demonstrate the preservation and promotion of First Nations culture.The award went to Tin Wis Best Western Resort, with its renewed commitment to focus on First Nations’ culture in order to promote its already successful business. Opened by Tla-o-qui-aht First Nation in 1994, Tin Wis Best Western is owned by Tla-o-qui-aht First Nation and managed by their board of directors. Since its inception the board has dedicated at least some of the resorts features to reflect the culture of Tla-o-qui-aht. The resort is undergoing renovations, giving each room a distinct First Nations décor. In addition it has developed more First Nations cultural activities, like carving and language workshops on site. “This award means the most out of all the awards we’ve received,” said Tin Wis General Manager George Atleo. “We recognized 10 years ago that sharing our history, culture and tradition is key to our success,” he continued. Tin Wis employs 90 workers, most of

whom are First Nations. “Not only do we provide jobs for our members, but also for First Nations people from everywhere,” Atleo said. Tin Wis board member Barb Audet said they decided to focus on promoting culture and Tin Wis has been putting on many workshops in their covered shelter. “We’ve got lots of artists and we’d like to promote them. It’s what the tourists want to see,” she said. The Outstanding Business Achievement Award went to Tseshaht Market in recognition of its overall success and longevity. A hub of activity on the Tofino Highway, Tseshaht Market has been in business for more than 30 years. It is owned by Tseshaht First Nation and managed by a board of directors. Tseshaht Market board member Katherine Robinson pointed out that business success can be very difficult for First Nations because of their size and lack of resources. “We are fortunate for our location right on the busy highway to the West Coast,” she noted. Accepting the award on behalf of Tseshaht First Nation, board member Mike Watts first thanked Tla-o-qui-aht First Nation for allowing the awards ceremony to take place at their home. Continued on page 7.

Port Alberni—Hupacasath was putting its cards on the table on Oct. 30 as it hosted its second community consult on the Tsu-ma-as Transformation Centre Project. The meeting was held in the great room at Tseshaht’s administration building and was very well attended. The plan to construct a new building at the Clutesi Haven Marina site brought together an interested and diverse set of user groups to discuss a number of concerns. High on the list was traffic flow in an already congested area of town. Parking was an issue for the people who moor their boats at the marina. A self-described historian wants the current marina building left as is and the surrounding green space kept intact. The Tyee Club representative was worried about the club’s displacement from the area, and wanted other sites considered for construction of the project. In attendance to hear the comments was Hupacasath Chief Councillor Shaunee Casavant and members of the Hupacasath community. Tseshaht council is also an interested party, so members who sit on a committee considering the initiative were in attendance, as were some Tseshaht citizens. Facilitating the discussion was Pam Shaw who opened the meeting by saying that the Hupacasath wanted to clear up some of the misconceptions about the project that had be “flying around town.” The interpretive centre that had been planned for the site—“that’s over,” she said. A couple of years ago the Hupacasath had a project in mind that would showcase their culture and traditions. The funding that would help build that project came from a group known as ICET, the Island Coastal Economic Trust. The problem with the funding, however, was that, if accepted, the project could not contain a revenue generating component, like a restaurant or a gift shop. Continued on page 2.