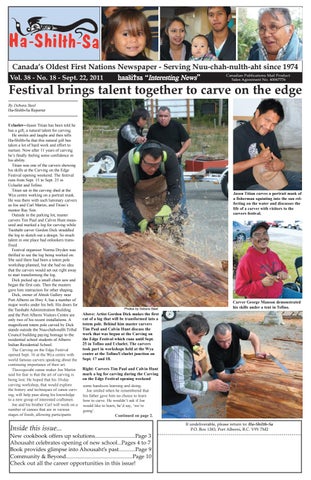 Festival brings talent together to carve on the edge By Debora Steel Ha-Shilth-Sa Reporter Ucluelet—Jason Titian has been told he has a gift; a natural talent for carving. He smiles and laughs and then tells Ha-Shilth-Sa that this natural gift has taken a lot of hard work and effort to nurture. Now after 11 years of carving he’s finally feeling some confidence in his ability. Titian was one of the carvers showing his skills at the Carving on the Edge Festival opening weekend. The festival runs from Sept. 15 to Sept. 25 in Ucluelet and Tofino. Titian sat in the carving shed at the Wya centre working on a portrait mask. He was there with such luminary carvers as Joe and Carl Martin, and Titian’s mentor Ray Sim. Outside in the parking lot, master carvers Tim Paul and Calvin Hunt measured and marked a log for carving while Tseshaht carver Gordon Dick straddled the log to sketch out a design. So much talent in one place had onlookers transfixed. Festival organizer Norma Dryden was thrilled to see the log being worked on. She said there had been a totem pole workshop planned, but she had no idea that the carvers would set out right away to start transforming the log. Dick picked up a small chain saw and began the first cuts. Then the masters gave him instruction for other shaping. Dick, owner of Ahtsik Gallery near Port Alberni on Hwy 4, has a number of major works under his belt. His doors for the Tseshaht Administration Building and the Port Alberni Visitors Centre are only two of his recent installations. A magnificent totem pole carved by Dick stands outside the Nuu-chah-nulth Tribal Council building paying homage to the residential school students of Alberni Indian Residential School. The Carving on the Edge Festival opened Sept. 16 at the Wya centre with world famous carvers speaking about the continuing importance of their art. Tla-o-qui-aht canoe maker Joe Martin said his fear is that the art of carving is being lost. He hoped that his 10-day carving workshop, that would explore the history and techniques of canoe carving, will help pass along his knowledge to a new group of interested craftsmen. Joe and his brother Carl will work on a number of canoes that are in various stages of finish, allowing participants

Jason Titian carves a portrait mask of a fisherman squinting into the sun relfecting on the water and discusses the life of a carver with visitors to the carvers festival.

Carver George Manson demonstrated his skills under a tent in Tofino.

Above: Artist Gordon Dick makes the first cut of a log that will be transformed into a totem pole. Behind him master carvers Tim Paul and Calvin Hunt discuss the work that was begun at the Carving on the Edge Festival which runs until Sept. 25 in Tofino and Ucluelet. The carvers took part in workshops held at the Wya centre at the Tofino/Ucluelet junction on Sept. 17 and 18. Right: Carvers Tim Paul and Calvin Hunt mark a log for carving during the Carving on the Edge Festival opening weekend some hands-on learning and doing. Joe smiled when he remembered that his father gave him no choice to learn how to carve. He wouldn’t ask if Joe would like to learn; he’d say, ‘we’re going’. Continued on page 2.