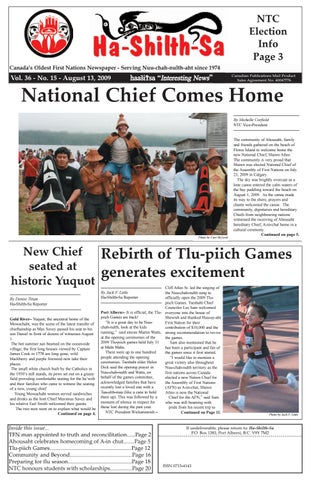 New Chief seated at historic Yuquot By Denise Titian Ha-Shilth-Sa Reporter Gold River– Yuquot, the ancestral home of the Mowachaht, was the scene of the latest transfer of chieftainship as Max Savey passed his seat to his son Daniel in front of dozens of witnesses August 1. The hot summer sun beamed on the ocean-side village; the first long houses viewed by Captain James Cook in 1778 are long gone; wild blackberry and purple fireweed now take their places. The small white church built by the Catholics in the 1950’s still stands, its pews set out on a grassy field providing comfortable seating for the ha’wiih and their families who came to witness the seating of a new, young chief. Young Mowachaht women served sandwiches and drinks as the host Chief Maximus Savey and his relative Earl Smith welcomed their guests. The two men went on to explain what would be Continued on page 4.

The community of Ahousaht, family and friends gathered on the beach of Flores Island to welcome home the new National Chief, Shawn Atleo. The community is very proud that Shawn was elected National Chief of the Assembly of First Nations on July 23, 2009 in Calgary. The sky was brightly overcast as a lone canoe entered the calm waters of the bay paddling toward the beach on August 1, 2009. As the canoe made its way to the shore, prayers and chants welcomed the canoe. The community, dignitaries and hereditary Chiefs from neighbouring nations witnessed the receiving of Ahousaht hereditary Chief, A-in-chut home in a cultural ceremony. Continued on page 5.

Rebirth of Tlu-piich Games generates excitement Cliff Atleo Sr. led the singing of the Nuu-chah-nulth song to officially open the 2009 Tlupiich Games. Tseshaht Chief Councilor Les Sam welcomed Port Alberni– It is official, the Tlu- everyone into the house of piich Games are back! Shewish and thanked Huu-ay-aht “It is a great day to be NuuFirst Nation for their chah-nulth, look at the kids contribution of $10,000 and the running,” said emcee Martin Watts, strong recommendation to revive at the opening ceremonies of the the games. 2009 Tlu-piich games held July 31 Sam also mentioned that he at Maht Mahs. has been a participant and fan of There were up to one hundred the games since it first started. people attending the opening “I would like to mention a ceremonies. Tseshaht elder Helen great victory also throughout Dick said the opening prayer in Nuu-chah-nulth territory as the Nuu-chah-nulth and Watts, on first nations across Canada behalf of the games committee, elected a new Nation Chief for acknowledged families that have the Assembly of First Nations recently lost a loved one with a (AFN) as A-in-chut, Shawn Taa-ulth-maa (like a cane to hold Atleo is now the National them up). This was followed by a Chief for the AFN,” said Sam moment of silence in respect for who was still beaming with those lost during the past year. pride from his recent trip to NTC President Wickaninnish – Continued on Page 11. By Jack F. Little Ha-Shilth-Sa Reporter