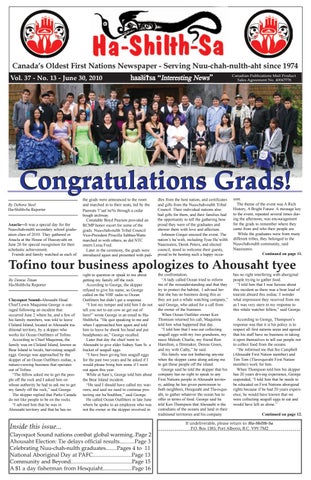 Congratulations Grads! By Debora Steel Ha-Shilth-Sa Reporter Anacla—It was a special day for the Nuu-chah-nulth secondary school graduation class of 2010. They gathered in Anacla at the House of Huu-ay-aht on June 26 for special recognition for their scholastic achievement. Friends and family watched as each of

the grads were announced to the room and marched in to their seats, led by the Paawats T’aat’ne%is through a cedar bough archway. Constable Boyd Pearson provided an RCMP honor escort for some of the grads. Nuu-chah-nulth Tribal Council Vice-President Priscilla Sabbas-Watts marched in with others, as did NTC intern Leisa Fred. Later in the ceremony, the grads were introduced again and presented with pad-

dles from the host nation, and certificates and gifts from the Nuu-chah-nulth Tribal Council. Their individual nations also had gifts for them, and their families had the opportunity to tell the gathering how proud they were of the graduates and shower them with love and affection. Johnson Ginger emceed the event. The nation’s ha’wiih, including Tyee Ha’wilth Naasissmis, Derek Peters, and elected council, stood to welcome their guests, proud to be hosting such a happy occa-

sion. The theme of the event was A Rich History, A Bright Future. A message key to the event, repeated several times during the afternoon, was encouragement for the grads to remember where they came from and who their people are. While the graduates were from many different tribes, they belonged to the Nuu-chah-nulth community, said Naasissmis. Continued on page 11.

Tofino tour business apologizes to Ahousaht tyee By Denise Titian Ha-Shilth-Sa Reporter Clayoquot Sound–Ahousaht Head Chief Lewis Maquinna George is outraged following an incident that occurred June 2 where he, and a few of his family members, was told to leave Cleland Island, located in Ahousaht traditional territory, by a skipper who works for Ocean Outfitters of Tofino. According to Chief Maquinna, the family was on Cleland Island, known as Bear Island to locals, harvesting seagull eggs. George was approached by the skipper of an Ocean Outfitters zodiac, a nature-viewing business that operates out of Tofino. “The fellow asked me to get the people off the rock and I asked him on whose authority he had to ask me to get my family off the rock,” said George. The skipper replied that Parks Canada do not like people to be on the rocks. “I advised him that he was in Ahousaht territory and that he has no

right to question or speak to me about getting my family off the rock. According to George, the skipper refused to give his name, so George called on the VHF radio to Ocean Outfitters but didn’t get a response. “I lost my temper and told him I do not tell you not to eat cow so get out of here!” wrote George in an email to HaShilth-Sa. “He quit speaking to me and when I approached him again and told him to leave he shook his head and put headphones on,” George recalled. Later that day the chief went to Ahousaht to give elder Sidney Sam Sr. a bucket of seagull eggs. “I have been giving him seagull eggs for the past two years and he asked if I would please bring him some if I went out again this year. While at Sam’s, George told him about the Bear Island incident. “He said I should have called my warriors, and said we need to continue protecting our ha’houlthee,” said George. He called Ocean Outfitters in late June where he spoke to an employee who was not the owner or the skipper involved in

the confrontation. “A lady called Ocean tried to inform me of the misunderstanding and that they try to protect the habitat; I advised her that she has no business doing this as they are just a whale watching company,” said George, who asked for a call from the owner of the business. When Ocean Outfitter owner Ken Thomson returned his call, Maquinna told him what happened that day. “I told him that I was out collecting seagull eggs with my two grandsons, my niece Melody Charlie, my friend Ron Hamilton, a filmmaker, Denise Green, and my wife Cathy,” he said. His family was not bothering anyone when the skipper came along asking me to get those people off the island. George said he told the skipper that his company has no right to speak to any First Nations people in Ahousaht territory, adding he has given permission to both neighbors, Hesquiaht and Tla-o-quiaht, to gather whatever the ocean has to offer in terms of food. George said he told Ken Thompson that Ahousaht is the custodians of the oceans and land in their traditional territories and his company

has no right interfering with aboriginal people trying to gather food. “I told him that I was furious about this incident as there was a boat load of tourists aboard this zodiac. I wonder what impression they received from me as I was very stern in my response to this whale watcher fellow,” said George. According to George, Thompson’s response was that it is his policy is to respect all first nations areas and agreed that his staff have no business in taking it upon themselves to tell our people not to collect food from the oceans. “He informed me that Ike Campbell (Ahousaht First Nation member) and Tim Tom (Tla-o-qui-aht First Nation member) work for him. When Thompson told him his skipper has 20 years driving experience, George responded, “I told him that he needs to be educated on First Nations aboriginal rights because if he had 20 years experience, he would have known that we were collecting seagull eggs to eat and would have left us alone.” Continued on page 12.