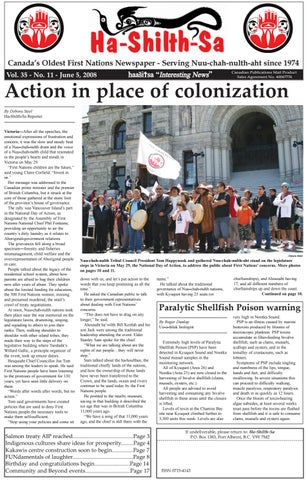 Action in place of colonization By Debora Steel Ha-Shilth-Sa Reporter Victoria—After all the speeches, the emotional expressions of frustration and concern, it was the slow and steady beat of a Nuu-chah-nulth drum and the voice of a Nuu-chah-nulth child that resonated in the people’s hearts and minds in Victoria on May 29. “First Nations children are the future,” said young Claire Corfield. “Invest in us.” Her message was addressed to the Canadian prime minister and the premier of British Columbia, but it struck at the core of those gathered at the stony foot of the province’s house of governance. The rally was Vancouver Island’s part in the National Day of Action, as designated by the Assembly of First Nations National Chief Phil Fontaine, providing an opportunity to air the country’s dirty laundry as it relates to Aboriginal-government relations. The grievances fell along a broad spectrum—forestry and fisheries mismanagement, child welfare and the over-representation of Aboriginal people in care. People talked about the legacy of the residential school system, about how parents are afraid to hug their children now after years of abuse. They spoke about the limited funding for education, the 500 First Nations women, missing and presumed murdered, the snail’s crawl of treaty negotiations. At noon, Nuu-chah-nulth nations took their place near the war memorial on the legislature lawns, drumming, singing, and signaling to others to join their ranks. Then, walking shoulder to shoulder with other island tribes, they made their way to the steps of the legislative building where Tseshaht’s Willard Gallic, a principle organizer of the event, took up emcee duties. Hesquiaht Chief Councillor Joe Tom was among the leaders to speak. He said First Nations people have been listening to the promises of government for 150 years, yet have seen little delivery on them. “Words after words after words, but no action.” Tom said governments have created policies that are used to deny First Nations people the necessary tools to make them self-sufficient. “Stop using your policies and come sit

Nuu-chah-nulth Tribal Council President Tom Happynook and gathered Nuu-chah-nulth-aht stand on the legislature steps in Victoria on May 29, the National Day of Action, to address the public about First Nations’ concerns. More photos on pages 10 and 11. down with us, and let’s put action to the words that you keep promising as all the time.” He asked the Canadian public to talk to their government representatives about dealing with First Nations’ concerns. “This does not have to drag on any longer,” he said. Ahousaht ha’wilth Bill Keitlah and his son Jack were among the traditional leadership attending the event. Elder Stanley Sam spoke for the chief. “What we are talking about are the rights of our people…they will never stop.” Sam talked about the ha-houlthee, the traditional chiefly lands of the nations, and how the ownership of those lands have never been transferred to the Crown, and the lands, ocean and rivers continue to be used today by the First Nations people. He pointed to the nearby museum, saying in that building it described the ice age that was in British Columbia 11,000 years ago. “We have a song of that 11,000 years ago, and the chief is still there with the

name.” He talked about the traditional governance of Nuu-chah-nulth nations, with Kyuquot having 25 seats (or

chieftainships), and Ahousaht having 17, and all different numbers of chieftainships up and down the coast. Continued on page 10.

Paralytic Shellfish Poison warning By Roger Dunlop Uu-a-thluk biologist Extremely high levels of Paralytic Shellfish Poison (PSP) have been detected in Kyuquot Sound and Nootka Sound mussel samples in the monitoring network. All of Kyuquot (Area 26) and Nootka (Area 25) are now closed to the harvesting of bivalve shellfish (clams, mussels, oysters, etc.). All people are advised to avoid harvesting and consuming any bivalve shellfish in these areas until the closure is lifted. Levels of toxin at the Chamiss Bay site near Kyuquot climbed further to 3,300 units this week. Levels are also

very high in Nootka Sound. PSP is an illness caused by marine biotoxins produced by blooms of microscopic plankton. PSP toxins accumulate in filter-feeding bivalve shellfish, such as clams, mussels, scallops and oysters, and in the tomalley of crustaceans, such as lobsters. Symptoms of PSP include tingling and numbness of the lips, tongue, hands and feet, and difficulty swallowing. In severe situations this can proceed to difficulty walking, muscle paralysis, respiratory paralysis and death in as quickly as 12 hours. Once the bloom of toxin-bearing algae subsides, at least several weeks must pass before the toxins are flushed from shellfish and it is safe to consume clams, mussels and oysters again.