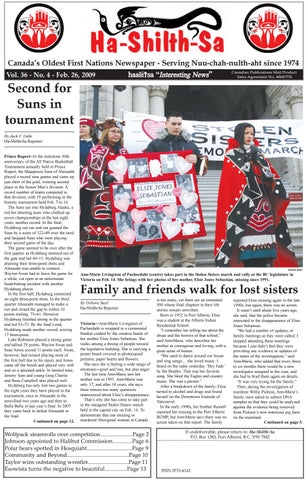 Second for Suns in tournament By Jack F. Little Ha-Shilth-Sa Reporter Prince Rupert–At the milestone 50th anniversary of the All Native Basketball Tournament annually held in Prince Rupert, the Maaqtusiis Suns of Ahousaht played a record nine games and came up just short of the gold, winning second place in the Senior Men’s division. A record number of teams competed in that division, with 19 performing in the historic tournament held Feb. 7 to 14. The Suns ran into Hydaburg Alaska, a red hot shooting team who chalked up seven championships in the last eight years, another record. In the final, Hydaburg out ran and out gunned the Suns by a score of 122–89 over the tired and fatigued Suns who were playing their second game of the day. The game seemed to be over after the first quarter as Hydaburg stormed out of the gate and led 40–15. Hydaburg was draining their three-point shots and Ahousaht was unable to connect. Waylon Swan had to leave the game for a while, cut open in an unfortunate head-butting incident with another Hydaburg player. In the first half, Hydaburg connected on eight three-point shots. In the third quarter Ahousaht managed to make a run and closed the gap to within 10 points trailing 71–61. However Hydaburg finished strong in the quarter and led 93–73. By the final’s end, Hydaburg made another record, scoring 17 three-point. Luke Robinson played a strong game and tallied 29 points. Waylon Swan and Sean Amos scored 11 points each. Swan, however, had missed playing most of the first half due to his injury and Amos came off the bench and played very well and on a sprained ankle. In limited time, Jeremy Sam and young Greg Charlie and Beau Campbell also played well. Hydaburg has only lost two games in the eight years they have played in the tournament, once to Ahousaht in the semi-final two years ago and then to Bella Bella in last year’s final. In 2007 they came back to defeat Ahousaht in the final. Continued on page 12.

Ann-Marie Livingston of Pacheedaht (centre) takes part in the Stolen Sisters march and rally at the BC legislature in Victoria on Feb. 14. She brings with her photos of her mother, Elsie Jones Sebastian, missing since 1991.

Family and friends walk for lost sisters By Debora Steel Ha-Shilth-Sa Reporter Victoria—Ann-Marie Livingston of Pacheedaht is wrapped in a ceremonial blanket crafted by the creative hands of her mother Elsie Jones Sebastian. She walks among a throng of people toward the legislative building. She is carrying a poster board covered in photocopied pictures, paper hearts and flowers. She says she is feeling a wide range of emotions—grief and loss, but also anger. The last time Ann-Marie saw her mother was in 1991. Ann-Marie was only 17, and after 18 years, she says there remain too many questions unanswered about Elsie’s disappearance. That’s why she has come to take part in the inaugural Stolen Sisters march held in the capital city on Feb. 14: To demonstrate that one missing or murdered Aboriginal woman in Canada

is too many, yet there are an estimated 500 whose final chapters in their life stories remain unwritten. Born in 1952 in Port Alberni, Elsie was a student at the Alberni Indian Residential School. “I remember her telling me about the abuse and the horrors of that school,” said Ann-Marie, who describes her mother as courageous and loving, with a great sense of humor. “She used to dance around our house and sing songs… she loved music. I heard on the radio yesterday ‘Hey Jude’ by the Beatles. That was her favorite song. She liked the Eagles and country music. She was a person.” After a breakdown of the family, Elsie turned to alcohol and drugs and found herself on the Downtown Eastside of Vancouver. In the early 1990s, her brother Russell reported her missing to the Port Alberni RCMP, but Ann-Marie says there was no action taken on that report. The family

reported Elsie missing again in the late 1990s, but again, there was no action. It wasn’t until about five years ago, she said, that the police became interested in the disappearance of Elsie Jones Sebastian. “We had a number of updates, or family meetings as they were called. I stopped attending these meetings because I just didn’t feel they were providing any evidence or updates of the status of the investigation,” said Ann-Marie, who added that every three to six months there would be a new investigator assigned to the case, and she had to brief them again on details. “It was very trying for the family.” Then, during the investigation of murderer Willie Pickton, Ann-Marie’s family were asked to submit DNA samples so that they could be analyzed against the evidence being removed from Pickton’s now notorious pig farm on the mainland. Continued on page 5.