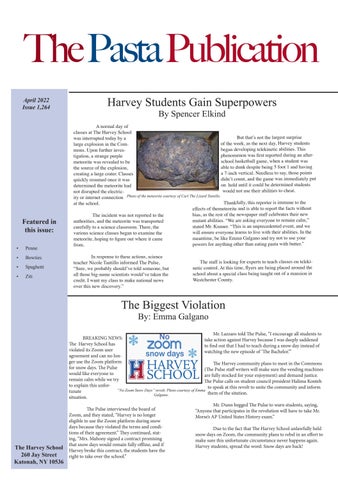 Featured in this issue: •

A normal day of classes at The Harvey School But that’s not the largest surprise was interrupted today by a of the week, as the next day, Harvey students large explosion in the Combegan developing telekinetic abilities. This mons. Upon further invesphenomenon was ﬁrst reported during an aftertigation, a strange purple school basketball game, when a student was meteorite was revealed to be able to dunk despite being 5 foot 1 and having the source of the explosion, a 7-inch vertical. Needless to say, those points creating a large crater. Classes didn’t count, and the game was immediately put quickly resumed once it was on hold until it could be determined students determined the meteorite had would not use their abilities to cheat. not disrupted the electricity or internet connection Photo of the meteorite courtesy of Carl The Lizard Tantillo. Thankfully, this reporter is immune to the at the school. effects of themeteorite and is able to report the facts without bias, as the rest of the newspaper staff celebrates their new The incident was not reported to the mutant abilities. “We are asking everyone to remain calm,” authorities, and the meteorite was transported stated Mr. Knauer. “This is an unprecedented event, and we carefully to a science classroom. There, the will ensure everyone learns to live with their abilities. In the various science classes began to examine the meantime, be like Emma Galgano and try not to use your meteorite, hoping to ﬁgure out where it came powers for anything other than eating pasta with butter.” from. In response to these actions, science teacher Nicole Tantillo informed The Pulse, “Sure, we probably should’ve told someone, but all those big-name scientists would’ve taken the credit. I want my class to make national news over this new discovery.”

The staff is looking for experts to teach classes on telekinetic control. At this time, ﬂyers are being placed around the school about a special class being taught out of a mansion in Westchester County.

The Biggest Violation By: Emma Galgano

Mr. Lazzaro told The Pulse, “I encourage all students to BREAKING NEWS: take action against Harvey because I was deeply saddened The Harvey School has to find out that I had to teach during a snow day instead of violated its Zoom user watching the new episode of ‘The Bachelor.’” agreement and can no longer use the Zoom platform The Harvey community plans to meet in the Commons for snow days. The Pulse (The Pulse staff writers will make sure the vending machines would like everyone to are fully stocked for your enjoyment) and demand justice. remain calm while we try The Pulse calls on student council president Halima Konteh to explain this unforto speak at this revolt to unite the community and inform “No Zoom Snow Days” revolt. Photo courtesy of Emma tunate them of the sitution. Galgano. situation.

The Pulse interviewed the board of Zoom, and they stated, “Harvey is no longer eligible to use the Zoom platform during snow days because they violated the terms and conditions of their agreement.” They continued, stating, “Mrs. Mahony signed a contract promising that snow days would remain fully offline, and if Harvey broke this contract, the students have the right to take over the school.”

Mr. Dunn begged The Pulse to warn students, saying, “Anyone that participates in the revolution will have to take Mr. Morse’s AP United States History exam.” Due to the fact that The Harvey School unlawfully held snow days on Zoom, the community plans to rebel in an effort to make sure this unfortunate circumstance never happens again. Harvey students, spread the word: Snow days are back!

It was 1985. 17-year-old Marty McFly was living in his lavish mansion and partying it up, cutting school, and hittin’ the slot machines at the Royal Casino in Los Angeles at around midnight with his buds. It seemed Marty had everything he wanted, but something was still missing. He talked to his father ﬁgure, Doc Brown. Doc Brown used his great intelligence to build a time machine.The time machine is so powerful that it could destroy the world in the three stages of time. Marty reportedly said, “Yo Doc! I want to use your time machine so I can see Henny Youngman give his famous one liner at the Apollo Theater in 1952.” According to Pulse reporter Spencer Elkind, Doc said, “OK, little man, if you don’t come back, you’re dead meat, kid.” Marty was fast asleep in the machine and began his journey. Later, Mary woke up and he realized he was in the future. He did

not know what happened. According to CNN, Mr. Janos said, “You’re at Harvey. Help us raise $350,000 by next Thursday. You dig, my guy?” Marty didn’t know what to do and was stuck in a pickle. Marty was hanging around campus taking a look at the school. Marty went into the lunch room and saw that burgers were being served. According to The New York Times, Jordan Freund asked, “C’mon bruh, you wanna eat?” “Sure, dude,” said Marty. Pulse reported Dan Gasch replied, “Don’t worry, this is really good. We used to eat pasta but now that’s banned. One of our students, Emma Galgano, had pasta with butter one day and had to go to the hospital because she choked on butter. Thank goodness she made it, otherwise she would’ve been a goner.”

After he scratched off the ﬁnal number, he won $800,000. The New York Post reported that Marty said, “Mr. Janos, here is the money. Hope it helps, dawg!” Mr. Janos replied, “Bet! Thanks, Marty. You saved Harvey.” Marty decided to donate the rest of the money to the Jewish National Fund in Israel. Marty found the time machine and went back to 1985.He then said, “I had quite a day, Doc. I helped save Harvey and Israel.” Doc stated, “Good for you. Now start studying for your exams.”According to the Daily Beast, Marty said, “Dig.”

According to Onion.com. Marty needed a way to get the money. Marty hitched a ride with a trucker to the nearest Seven Eleven in Katonah. He bought a scratch off lottery ticket.

Marty McFly as he arrived on campus. Photo courtesy of Futurepedia.

Since 1886, the school bus has been used to transport children from and to school. A recent study by O.J Mahomes stated that 90% of children, as of 2020, have been riding on bees to school. This phenomenon came to people’s attention during the height of the COVID-19 pandemic, when there was a shortage of school bus drivers. Since parents have to work, getting their children to school and picking them up in the afternoon was problematic. Since parents were dealing with this situation, a solution had to come into play so children could continue to go to school. Philosopher and inventor Pierre Pants came up with the idea that made it possible for children to ride to school on bees back in 2015, but society had no use for his invention. Because of the shortage of bus drivers, Pants made his product known and started to sell them to school districts around the country. At first, Pants’s product made parents question if it was safe for their children to be riding onbees to their school. After countless tests, parents finally trusted the safety of the bees.

Picture of a mechanical bee. Courtesy of istock.com

In his article about the new transportation system, Mahomes stated that the bees are notreal but mechanical. He also stated, “The bees can travel up to speeds of 60 mph and can detect any danger up to a 20-mile radius.” Although the bees are mechanical, it is still an interesting solution for transporting children. You may be saying to yourself, “This seems fake,” but Mahomes’s invention made it so the mechanical bees are microscopic, and when the children get onto the bees, they also shrink to the size of the bees, making the method of transportation more realistic and unseen to the human eye. For years to come, transportation is in good hands because of the bees, and the school bus industry is bond to go out of business.

Head chef Suchada Palmer has said her goodbyes and has decided to work at a schoo where junior Dan Gasch is not doing pushups in the corner of the Flex Space. The catch? She hastaken the entire Harvey FLIK Independent School Dining staff with her. That’s right. Melissa, Misty, and all your favorite chefs that serve your meals at school have joined Chef Palmer. But have no fear! Harvey students and faculty are banding together to cook their own meals at school. Mr. Lazzaro, head of the upper school, makes his famous wood-ﬁre pizza for his studentsand faculty every Friday. Last school year, Mr. Lazzaro used his pizza-making skills to help Harvey class of 2021 alum, Aaron Shyer, with his senior bridge independent learning project. Now, Mr. Lazzaro has recruited some current students to help him make pizza for more than 350 Harvey community members who eat lunch on campus every day. He says a huge helpwith the transition from professional trained chefs has been Harvey junior Emma Galgano, who is also the Junior Editor of The Pulse. Emma, on the other hand, told The Pulse, “Eh. I still prefer pasta with butter.”

In order to keep a menu with a great variety of items, many of Harvey’s international students have lent a helping hand, such as Harvey senior Oscar Lo from Taiwan. While traditional Taiwanese cuisine includes gua bao, Taiwanese pork belly buns, and lu rou fan, a Taiwanese braised pork rice bowl, Oscar adds a bit of a twist to his meals. Oscar says, “When I’m home in Taiwan, it’s typically my parents who make these traditional meals for me. I haven’t gone home very often since coming to Harvey as a freshman, so I never really had a chance to learn how to make true Taiwanese food.” So, when the whole school was excited for Taiwanese Day at lunch and saw Oscar serving the everyday option of pasta with butter or red-sauce, there was some disappointment from his peers, who truly looked forward to the cultural meals that they would often eat when Chef Suchada was the head chef. Nonetheless, the one major fan of Taiwanese Day’s pasta was none other than Emma Galgano. 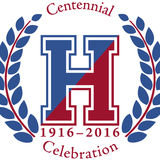