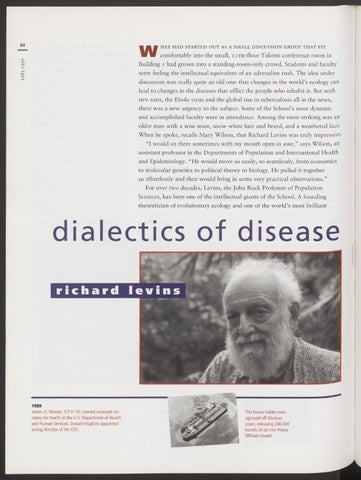 comfortably into the small, iiTH-floor Takemi conference room in

Building i had grown into a standing-room-only crowd. Students and faculty were feeling the intellectual equivalent of an adrenaline rush. The idea under discussion was really quite an old one: that changes in the world's ecology can lead to changes in the diseases that afflict the people who inhabit it. But with Hiv-AiDS,

the Ebola virus and the global rise in tuberculosis all in the news,

there was a new urgency to the subject. Some of the School's most dynamic and accomplished faculty were in attendance. Among the most striking was an older man with a wise mien, snow-white hair and beard, and a weathered face. When he spoke, recalls Mary Wilson, that Richard Levins was truly impressive. " I would sit there sometimes with my mouth open in awe," says Wilson, an assistant professor in the Departments of Population and International Health and Epidemiology. "He would move so easily, so seamlessly, from economics to molecular genetics to political theory to biology. He pulled it together so effortlessly and then would bring in some very practical observations." For over two decades, Levins, the John Rock Professor of Population Sciences, has been one of the intellectual giants of the School. A founding theoretician of evolutionary ecology and one of the world's most brilliant

The Exxon Valdez runs aground off Alaskan coast, releasing 240,000 barrels of oil into Prince William Sound. 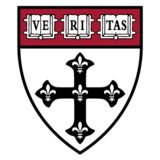