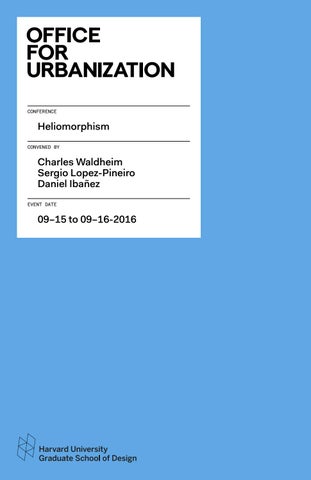 Heliomorphism the inaugural conference of the Harvard GSD Office for Urbanization 09-15 to 09-16-2016 The Harvard Graduate School of Design’s Office for Urbanization draws upon the School’s history of design innovation to address societal and cultural conditions associated with contemporary urbanization. It develops speculative and projective urban scenarios through sponsored design research projects. The topic of solar orientation and urban form is both perennial and, once again, timely. The discourses and practices of ‘ecological urbanism’ have turned our focus to the terrestrial topics of hydrological connectivity and ecological function. Heliomorphism proposes to revise and extend the ecological urbanism agenda by returning to solar performance. Recent projects by a number of leading architects and urbanists have suggested new forms of urban order through solar orientation. In many of these projects, designers correlate the shape of the city to a complex and contradictory economy of solar performance. The topics of solar orientation and social order, public health, and political economy were fundamental questions for many protagonists and projects of modern planning. In the wake of the collapse of modern planning, singular models of social urban order based on latitude and solar equity have given way to neoliberal models of market driven urbanization. The inaugural conference of the Harvard GSD Office for Urbanization returns to this archaic aspect of urban order, and convenes an international group of GSD faculty, doctoral candidates, and a select group of GSD alumni to examine its present potentials through three discursive frames: plug-ins, commons, and zero-sum.

Plug-ins Ralph Knowlesâ&amp;#x20AC;&amp;#x2122;s concept of the â&amp;#x20AC;&amp;#x2DC;solar envelopeâ&amp;#x20AC;&amp;#x2122; proposed a design tool that anticipates contemporary interests in parametricism and relational modeling. The envelope offered a projective form through which urban morphology was indexed to solar performance. The technological developments of the last decade have enabled an unanticipated degree of precision and feedback, potentially infusing new possibilities into an idea that has a halfcentury of history. Plug-ins revisits the changes, conceptual and projective, that contemporary models of computational geometry have brought to this design model. Commons Independent of location or latitude, access to the sun is considered an ancient and inviolable right in many cultures. Several current politico economic conceptions, however, protect it for health considerations while others regulate it for energy reasons. Regardless of these two distinctions, Commons reconsiders both types of solar access to be issues of social equity and it examines, accordingly, the tensions that exist between built form through capital accumulation and access to sunlight through environmental consensus. Zero-Sum The energy crisis and economic shocks of the 1970s led to experimental and counter-culture practices of architecture and urbanism. These practices enabled the emergence of domestic applications and DIY methods of implementation in a new political economy of solar energy. The current environmental crisis embraces zero-carbon responses and has pushed the scale of operation to neoliberal corporate and governmental urbanizations. Zero-sum reviews the shifts from the domestic to the urban, from the individual to the conglomerate (political or economical), from the alternative to the new normal.

Density vs. the Ethics of the Solar Envelope: A Case Study

Design Responsibility in Human Health: An Analysis of Sunlight Use in Social Housing in Chile

The 1978 Sun Congress: Exploring the Technopolitics of Solar Architecture in the Third World

Plug-ins The Heuristic Ecology of Heliomorphism

Balancing Urban Form: the Means, the Ends and the Tools

Commons Heliomorphism and the Production Eve Blau of Socialist Space

The Thermal Resonance of Buildings

Sun from the North: Enrico Tedeschi and a Cosmic Architecture

the inaugural conference of the Harvard GSD Office for Urbanization 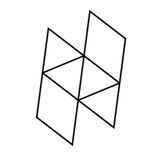