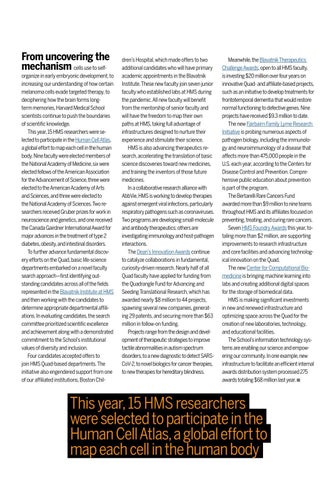 From uncovering the mechanism cells use to selforganize in early embryonic development, to increasing our understanding of how certain melanoma cells evade targeted therapy, to deciphering how the brain forms longterm memories, Harvard Medical School scientists continue to push the boundaries of scientific knowledge. This year, 15 HMS researchers were selected to participate in the Human Cell Atlas, a global effort to map each cell in the human body. Nine faculty were elected members of the National Academy of Medicine, six were elected fellows of the American Association for the Advancement of Science, three were elected to the American Academy of Arts and Sciences, and three were elected to the National Academy of Sciences. Two researchers received Gruber prizes for work in neuroscience and genetics, and one received the Canada Gairdner International Award for major advances in the treatment of type 2 diabetes, obesity, and intestinal disorders. To further advance fundamental discovery efforts on the Quad, basic life-science departments embarked on a novel faculty search approach—first identifying outstanding candidates across all of the fields represented in the Blavatnik Institute at HMS and then working with the candidates to determine appropriate departmental affiliations. In evaluating candidates, the search committee prioritized scientific excellence and achievement along with a demonstrated commitment to the School’s institutional values of diversity and inclusion. Four candidates accepted offers to join HMS Quad-based departments. The initiative also engendered support from one of our affiliated institutions, Boston Chil-

dren’s Hospital, which made offers to two additional candidates who will have primary academic appointments in the Blavatnik Institute. These new faculty join seven junior faculty who established labs at HMS during the pandemic. All new faculty will benefit from the mentorship of senior faculty and will have the freedom to map their own paths at HMS, taking full advantage of infrastructures designed to nurture their experience and stimulate their science. HMS is also advancing therapeutics research, accelerating the translation of basic science discoveries toward new medicines, and training the inventors of those future medicines. In a collaborative research alliance with AbbVie, HMS is working to develop therapies against emergent viral infections, particularly respiratory pathogens such as coronaviruses. Two programs are developing small-molecule and antibody therapeutics; others are investi­gating immunology and host-pathogen interactions. The Dean’s Innovation Awards continue to catalyze collaborations in fundamental, curiosity-driven research. Nearly half of all Quad faculty have applied for funding from the Quadrangle Fund for Advancing and Seeding Translational Research, which has awarded nearly $8 million to 44 projects, spawning several new companies, generating 29 patents, and securing more than $63 million in follow-on funding. Projects range from the design and development of therapeutic strategies to improve tactile abnormalities in autism spectrum disorders, to a new diagnostic to detect SARSCoV-2, to novel biologics for cancer therapies, to new therapies for hereditary blindness.

Meanwhile, the Blavatnik Therapeutics Challenge Awards, open to all HMS faculty, is investing $20 million over four years on innovative Quad- and affiliate-based projects, such as an initiative to develop treatments for frontotemporal dementia that would restore normal functioning to defective genes. Nine projects have received $9.3 million to date. The new Fairbairn Family Lyme Research Initiative is probing numerous aspects of pathogen biology, including the immunology and neuroimmunology of a disease that affects more than 475,000 people in the U.S. each year, according to the Centers for Disease Control and Prevention. Comprehensive public education about prevention is part of the program. The Bertarelli Rare Cancers Fund awarded more than $9 million to nine teams throughout HMS and its affiliates focused on preventing, treating, and curing rare cancers. Seven HMS Foundry Awards this year, totaling more than $2 million, are supporting improvements to research infrastructure and core facilities and advancing technological innovation on the Quad. The new Center for Computational Biomedicine is bringing machine learning into labs and creating additional digital spaces for the storage of biomedical data. HMS is making significant investments in new and renewed infrastructure and optimizing space across the Quad for the creation of new laboratories, technology, and educational facilities. The School’s information technology systems are enabling our science and empowering our community. In one example, new infrastructure to facilitate an efficient internal awards distribution system processed 275 awards totaling $68 million last year. n

This year, 15 HMS researchers were selected to participate in the Human Cell Atlas, a global effort to map each cell in the human body