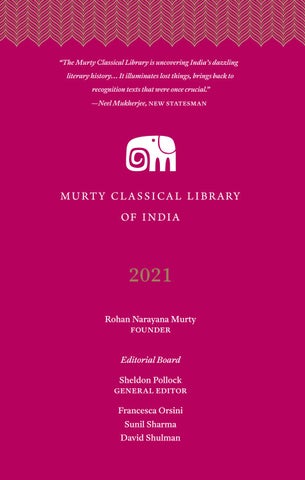 Akbarnāma, or The History of Akbar, by Abu’lFazl, is one of the most important works of IndoPersian history and a touchstone of prose artistry. Marking a high point in a long, rich tradition of Persian historical writing, it served as a model for historians across the Persianate world. The work is at once a biography of the Mughal emperor Akbar (r. 1556–1605) that includes descriptions of his political and martial feats and cultural achievements, and a chronicle of sixteenthcentury India. The Persian text, presented in the Naskh script, is based on a careful reassessment of the primary sources. mcli 26 2021 800 pp. 9780674244160

THE ESSENCE OF POLITICS

Kamandaki’s Nītisāra, or The Essence of Politics, redefined the field of political thought in early medieval India and became one of the most influential works in the genre across South and Southeast Asia. It was likely written during or shortly after the Gupta Empire (c. 325–550 CE) and enjoyed wide popularity for nearly a millennium. An elegant introduction to the intricacies of statecraft, The Essence of Politics encompasses virtually all aspects of elite social life, making it indispensable for generals, spies, ministers, and other members of the royal court, especially poets writing about war and conquest. Addressed directly to the king, its lessons range from the finer points of military strategy and economic policy to the moral qualities of effective rulers. Kamandaki anchors political practice in intellectual and spiritual discipline. His model of leadership, based on self-control and personal cultivation, is as relevant today as it was in its own time. The Sanskrit text, presented here in the Devanagari script, accompanies a new English prose translation. mcli 28 2021 368 pp. 9780674975767

Selections from a World Classic

Bullhe Shah’s work is among the glories of Panjabi literature, and the iconic eighteenth-century poet is widely regarded as a master of mystical Sufi poetry. His verses, famous for their vivid style and outspoken denunciation of artificial religious divisions, have long been beloved and continue to win audiences around the world. This striking new translation is the most authoritative and engaging introduction to an enduring South Asian classic. 2021 220 pp. $19.95 9780674251366

NEW TITLES POEMS FROM THE SATSAI

Edited and translated by Andrew Ollett

In his Satsai, or Seven Hundred Poems, the seventeenth-century poet Biharilal draws on a rich vernacular tradition, blending amorous narratives about the god Krishna and the goddess Radha with archetypal hero and heroine motifs from older Sanskrit and Prakrit conventions. While little is known of Biharilal’s life beyond his role as court poet to King Jai Singh of Amber (1611–1667), his verses reflect deep knowledge of local north Indian culture and geography, especially the bucolic landscapes of Krishna’s youth in the Braj region (in today’s Uttar Pradesh). With ingenuity and virtuosity, Biharilal weaves together worldly experience and divine immanence, and adapts the tropes of stylized courtly poetry, such as romantic rivalries, clandestine trysts, and the bittersweet sorrow of separated lovers. Poems from the Satsai comprises a selection of four hundred couplets from this enduring work. The Hindi text— composed in Braj Bhasha, the literary language of early-modern north India—is presented here in the Devanagari script and accompanies a new English verse translation.

The Prakrit romance Lilavai, an early ninthcentury poem attributed to Kouhala and set in modern-day coastal Andhra Pradesh, is the most celebrated work in the genre. Complexly narrated in the alternating voices of its heroines and heroes and featuring a cast of semi-divine and magical beings, it centers on three young women: Lilavai, princess of Sinhala (today’s Sri Lanka); her cousin Mahanumai, princess of the mythical city Alaka; and Kuvalaavali, Mahanumai’s adopted sister. Following a prophecy that Lilavai’s husband will rule the earth, the princess happens upon a portrait of King Hala of Pratishthana and immediately falls in love. While journeying to meet him, she hears her cousins’ tales of their lost loves, and then vows not to marry until they are reunited. To win Lilavai’s hand, King Hala journeys to the underworld, faces monsters, and overcomes armies. Lilavai explores themes of karma and female desire, notably privileging women as storytellers. A new edition of the Prakrit text, presented in the Devanagari script, accompanies a new English prose translation.

A Translation of the Therigatha Translated by Charles Hallisey

The Therīgāthā is one of the oldest surviving literatures by women, composed more than two millennia ago and originally collected as part of the Pali canon of Buddhist scripture. These poems were written by some of the first Buddhist women—therīs—honored for their religious achievements. Through imaginative verses about truth and freedom, the women recount their lives before ordination and their joy at attaining liberation from samsara. Poems of the First Buddhist Women offers startling insights into the experiences of women in ancient times that continue to resonate with modern readers. With a spare and elegant style, this powerful translation introduces us to a classic of world literature. 2021 192 pp. $19.95 9780674251359

THE STORY OF MANU

THE HISTORY OF AKBAR

THE EPIC OF RAM

SELECTED GHAZALS AND OTHER POEMS

ARJUNA AND THE HUNTER

THE KILLING OF SHISHUPALA

POEMS OF THE FIRST BUDDHIST WOMEN A Translation of the Therigatha

IN PRAISE OF ANNADA

A TREATISE ON DHARMA

THE LIFE OF PADMA

THE ESSENCE OF POLITICS

The Murty Classical Library of India makes available original texts and modern English translations of the masterpieces of literature and thought from across the whole spectrum of Indic languages over the past two millennia in the most authoritative and accessible formats on offer anywhere. For information or to place an order online: www.murtylibrary.com

The Murty Classical Library of India makes available original texts and modern English translations of the masterpieces of literature and thought from across the whole spectrum of Indic languages over the past two millennia in the most authoritative and accessible formats on offer anywhere. For information or to place an order online: http://www.murtylibrary.com 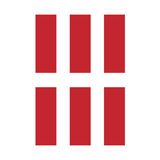