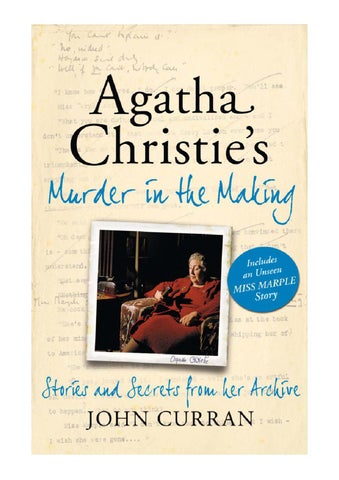 Agath Christie’s MURDER IN THE MAKING

From Notebook 4 a tantalising glimpse of a project, never realised, from the 1960s. See Unused Ideas Three.

Agath Christie’s MURDER IN THE MAKING

‫ﱙﱙﱙﱙﱜﱙﱙﱙﱙ‬ Stories and Secrets from her Archive

HarperCollinsPublishers 77–85 Fulham Palace Road Hammersmith, London W6 8JB www.harpercollins.co.uk First published 2011 1 Text copyright © John Curran 2011. Agatha Christie Notebooks/ The Man Who Knew/ The Case of the Caretaker’s Wife copyright © Christie Archive Trust 2011. Quotations copyright © Agatha Christie Limited (a Chorion company) 2011. All rights reserved. www.agathachristie.com John Curran asserts the moral right to be identiﬁed as the author of this work. ISBN 978-0-00-739676-4 Printed and bound in Great Britain by Clays Ltd, St Ives plc All rights reserved. No part of this publication may be reproduced, stored in a retrieval system, or transmitted, in any form or by any means, electronic, mechanical, photocopying, recording or otherwise, without the prior written permission of the publishers. This book is sold subject to the condition that it shall not, by way of trade or otherwise, be lent, re-sold, hired out or otherwise circulated without the publisher’s prior consent in any form of binding or cover other than that in which it is published and without a similar condition including this condition being imposed on the subsequent purchaser. ™

FSC™ is a non-profit international organisation established to promote the responsible management of the world’s forests. Products carrying the FSC label are independently certified to assure consumers that they come from forests that are managed to meet the social, economic and ecological needs of present and future generations, and other controlled sources. Find out more about HarperCollins and the environment at www.harpercollins.co.uk/green

In Agatha Christie’s Secret Notebooks I discussed some of the ideas that appeared in the Notebooks but were not further developed. Most of those included in the earlier volume were short, single ideas; a few lines scribbled by Christie in a Notebook as the idea came to her. But there are more elaborate ideas that, despite development beyond a few sentences, still did not result in a story. In some cases detailed character descriptions (‘young schoolmaster type’), definite backgrounds (‘Hellenic cruise setting’) or exact plot devices (‘real drink poisoned earlier’) are listed; even titles (‘Mousetrap II’) are included. Many of these ideas seem very promising and it is easy to imagine most of them leading to a new ‘Christie for Christmas’. Fragments of some of these ideas were used, perhaps slightly adapted, in published works and this was one of the advantages that Christie saw in the chaos of her Notebooks when she wrote in her Autobiography, ‘What it’s all about I can’t remember now; but it often stimulates me, if not to write that identical plot, at least to write something else.’ This ﬁrst selection includes two of the more elaborate sketches.

THE CLUEDO CASE Book idea George speaks to Poirot – his sister in law – she ‘obliges’ – giving evidence – but offered a very good post in Eire [Ireland] – can she take it? (or something [in] France). Or perhaps she is a ‘Nannie’ who now does a lot of ‘cooking’ in the house. What evidence? Murder case but her evidence is quite unimportant She saw Professor Plum in the library – with the candlestick. Shall the people be General Col. Mustard Mrs. White – Housekeeper? Or Col. M’s sister Miss Scarlet – young woman of doubtful morals – engaged to son? or secretary to Plum Mrs. Peacock – Colonel’s sister Reverend Green – Former owner – in neighbourhood Professor Plum – Old friend of Mustard Result of conversation ‘Nannie’ or ‘Daily Help’ dies after cup of tea? Now – what did she see or know that she didn’t know she knew A Point of Time The siren goes on a Monday at a certain time. She says it always ‘gives her a turn.’ The point is siren went off at 11.30 and she has just said Professor Plum down stairs at 11.25 (really 11.35). Electric clock has been stopped and put on again

never explored. This sketch appears in Notebook 12 between detailed notes for 1954’s Spider’s Web and the Marple short story ‘Sanctuary’, so the mid 1950s seems to be the most likely date of composition. This also tallies with the 1950 release date of Cluedo. In many ways this sketch reads like an elaborate version of the 1924 Mr Quin short story ‘The Sign in the Sky’. In that story a housemaid mentions seeing a ‘sign’ – the Hand of God, in reality the smoke from a passing train – at the time her mistress, Vivien Barnaby, is shot. Although during the investigation the time of the shot is taken from the clocks in the house, in reality the time of the train is accurate and the clocks have been altered by the murderer. Although she does not realise the importance of her evidence, the maid is subsequently offered, and accepts, a lucrative position in distant Canada. The variation in the unused idea above is a siren and an electric clock, but it is essentially the same plot. Unreliable clocks or watches are plot features of The Murder at the Vicarage, Murder on the Orient Express and Evil under the Sun. The ‘Nannie dying’ idea featured in Crooked House; and the ‘post abroad’ ploy also appears in other titles. In Chapter 6 of Why Didn’t They Ask Evans? Bobby is offered an attractive job in Buenos Aires and a similar offer is made to no less a person than Poirot himself in Chapter 1 of The Big Four. The concept of a character knowing something (dangerous to the killer) without realising its signiﬁcance was a regular feature of Christie plots throughout her career. Sir Bartholomew Strange in Three Act Tragedy, Miss Sainsbury Seale in One, Two, Buckle my Shoe, Agnes Woddell in The Moving Finger, Heather Badcock in The Mirror Crack’d from Side to Side – all die without knowing why. And the unfortunate Mrs De Rushbridger, also in Three Act Tragedy, dies because she knows nothing.

THE PLASTIC SURGEON Old man is crook – played market etc. Or surgeon – plastic Wife was hospital nurse – ill – heart – had to give up her job – nursed old man – married him – happy in a quiet way – had had love affair with young medical student. Morgan and Eiluned – son and wife – strong feelings Selina – dau Kathleen – daughter – (Nurse Vernon?) They have to live together in ‘Crooked House’ because of War difﬁculties. Old man holds purse strings – two children – Serena and Edward Tutor? Young man – wounded in War – a cripple – Miles Dr. Kirkpatrick – Suggestion is that Gertrude killed him – or Miles Money is left to her Possibly Dr. Kirkpatrick is her old boyfriend – he intends to marry Kathleen Triangle Country House Rich man dead in (1) ofﬁce (2) study in suburban house Crooked Mile (Dr. plastic surgeon – crook) Old man like gnome – young hospital wife nurse Crooked House Crippled soldier with scarred face – old man is treating him for war wounds – but not war wounds – really a murderer Combine with Helen idea – man convinced he is a murderer. Doctor persuades him and says he will remake his face Crooked Man Old gnome like man – plastic surgeon – (struck off for unprofessional conduct – did surgery for crooks) – young

Although all of these extracts contain deﬁnite elements (and the title) of Crooked House – a young tutor, an old gnomelike man holding the purse-strings and a young wife – and all come from Notebook 14, they are included here because they also feature the Plastic Surgeon idea. With three attempts over a dozen pages it would seem that this idea was one that appealed to Christie but ultimately defeated her. It is probable that she abandoned it and subsumed most of these ideas into Crooked House. But there are foreshadowings of at least two other novels. The ‘rich man dead in ofﬁce’ from the ﬁrst extract explicitly presages A Pocket Full of Rye; and both ‘Combine with Helen idea’ and ‘man convinced he is a murderer’ have strong echoes of Sleeping Murder.

In this follow-up volume to the acclaimed Agatha Christie's Secret Notebooks, Christie archivist and expert John Curran leads the reader through the six decades of Agatha Christie's writing career, unearthing some remarkable clues to her success and a number of never-before-published excerpts and stories from her archives.