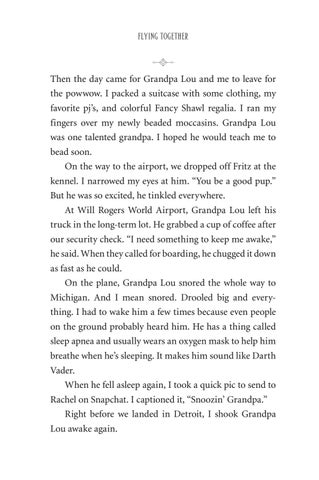 Then the day came for Grandpa Lou and me to leave for the powwow. I packed a suitcase with some clothing, my favorite pj’s, and colorful Fancy Shawl regalia. I ran my fingers over my newly beaded moccasins. Grandpa Lou was one talented grandpa. I hoped he would teach me to bead soon. On the way to the airport, we dropped off Fritz at the kennel. I narrowed my eyes at him. “You be a good pup.” But he was so excited, he tinkled everywhere. At Will Rogers World Airport, Grandpa Lou left his truck in the long-term lot. He grabbed a cup of coffee after our security check. “I need something to keep me awake,” he said. When they called for boarding, he chugged it down as fast as he could. On the plane, Grandpa Lou snored the whole way to Michigan. And I mean snored. Drooled big and everything. I had to wake him a few times because even people on the ground probably heard him. He has a thing called sleep apnea and usually wears an oxygen mask to help him breathe when he’s sleeping. It makes him sound like Darth Vader. When he fell asleep again, I took a quick pic to send to Rachel on Snapchat. I captioned it, “Snoozin’ Grandpa.” Right before we landed in Detroit, I shook Grandpa Lou awake again.

Welcome to Heartdrum! This new imprint from HarperCollins Children's Books centers contemporary Native and First Nation stories to uplift voices of authors and illustrators from a variety of tribes and nations across North America. Books will be published in a range of formats and genres: picture books, chapter books, middle grade and teen fiction, graphic novels for all ages, and nonfiction. In partnership with We Need Diverse Books, HarperCollins will make a yearly contribution to the Native fund from We Need Diverse Books. This brochure offers information on the imprint and its foundation as well as a sneak peek of two of the books on the launch list in Winter 2021.