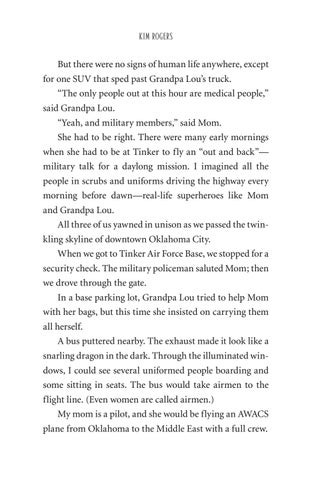 But there were no signs of human life anywhere, except for one SUV that sped past Grandpa Lou’s truck. “The only people out at this hour are medical people,” said Grandpa Lou. “Yeah, and military members,” said Mom. She had to be right. There were many early mornings when she had to be at Tinker to fly an “out and back”— military talk for a daylong mission. I imagined all the people in scrubs and uniforms driving the highway every morning before dawn—real-life superheroes like Mom and Grandpa Lou. All three of us yawned in unison as we passed the twinkling skyline of downtown Oklahoma City. When we got to Tinker Air Force Base, we stopped for a security check. The military policeman saluted Mom; then we drove through the gate. In a base parking lot, Grandpa Lou tried to help Mom with her bags, but this time she insisted on carrying them all herself. A bus puttered nearby. The exhaust made it look like a snarling dragon in the dark. Through the illuminated windows, I could see several uniformed people boarding and some sitting in seats. The bus would take airmen to the flight line. (Even women are called airmen.) My mom is a pilot, and she would be flying an AWACS plane from Oklahoma to the Middle East with a full crew.

Welcome to Heartdrum! This new imprint from HarperCollins Children's Books centers contemporary Native and First Nation stories to uplift voices of authors and illustrators from a variety of tribes and nations across North America. Books will be published in a range of formats and genres: picture books, chapter books, middle grade and teen fiction, graphic novels for all ages, and nonfiction. In partnership with We Need Diverse Books, HarperCollins will make a yearly contribution to the Native fund from We Need Diverse Books. This brochure offers information on the imprint and its foundation as well as a sneak peek of two of the books on the launch list in Winter 2021.