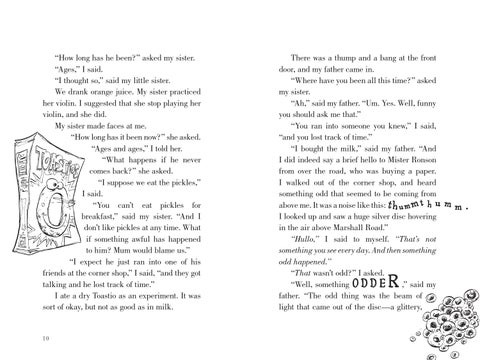 “How long has he been?” asked my sister. “Ages,” I said. “I thought so,” said my little sister. We drank orange juice. My sister practiced her violin. I suggested that she stop playing her violin, and she did. My sister made faces at me. “How long has it been now?” she asked. “Ages and ages,” I told her. “What happens if he never comes back?” she asked. “I suppose we eat the pickles,” I said. “You can’t eat pickles for breakfast,” said my sister. “And I don’t like pickles at any time. What if something awful has happened to him? Mum would blame us.” “I expect he just ran into one of his friends at the corner shop,” I said, “and they got talking and he lost track of time.” I ate a dry Toastio as an experiment. It was sort of okay, but not as good as in milk.

There was a thump and a bang at the front door, and my father came in. “Where have you been all this time?” asked my sister. “Ah,” said my father. “Um. Yes. Well, funny you should ask me that.” “You ran into someone you knew,” I said, “and you lost track of time.” “I bought the milk,” said my father. “And I did indeed say a brief hello to Mister Ronson from over the road, who was buying a paper. I walked out of the corner shop, and heard something odd that seemed to be coming from above me. It was a noise like this: t h u m m t h u I looked up and saw a huge silver disc hovering in the air above Marshall Road.” “Hullo,” I said to myself. “That’s not something you see every day. And then something odd happened.” “That wasn’t odd?” I asked. “Well, something O DDE ,” said my father. “The odd thing was the beam of light that came out of the disc—a glittery,

shimmery beam of light that was visible even in the daylight. And the next thing I knew, I was being sucked up into the disc. Fortunately,

I had put the milk into my coat pocket.

e have come to your planet from a world very far away,” said the people in the disc. I call them people, but they were a bit green and rather globby and they looked very grumpy indeed. “Now, as a representative of your species, we demand that you give us ownership of the whole planet. We are going to remodel it.” “I jolly well won’t,” I said.

“Then,” it said, “we will bring all your enemies here and have them make you miserable until you agree to sign the planet over to us.” I was going to point out to them that I didn’t have any enemies when I noticed a large metal door with

THIS MEAN S YOU! on it. I opened the door. “Don’t do that,” said a green, globby person. “You’ll let the space-time continuum in.” But it was too late; I had already pushed open the door.

Fortunately, I had kept tight hold of the milk, so when I splashed into the sea I

didn’t lose it. “What was that?” said a woman’s voice. “A big fish? A mermaid? Or was it a spy?” I wanted to say that I wasn’t any of those things, but my mouth was full of seawater. I felt myself being hauled up onto the deck of a little ship. There were a number of men and a woman on the deck, and they all looked very cross.

“Who be ye, landlubber?” said the woman, who had a big hat on her head and a parrot on her shoulder. “He’s a spy! A walrus in a coat! A new kind of mermaid with legs!” said the men. “What are you doing here?” asked the woman. “Well,” I said. “I just set out to the corner shop for some milk for my children’s breakfast and for my tea, and the next thing I knew—” “He’s lying, Your Majesty!” She pulled out her cutlass. “You dare lie to the Queen of the Pirates?” Fortunately, I had kept tight hold of the milk, and now I pointed to it. “If I did not go to the corner shop to fetch the milk,” I asked them, “then where did this milk come from?” At this, the pirates were completely speechless. “Now,” I said, “if you could let me off somewhere near to my destination, I would be much obliged to you.” 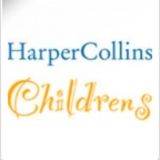