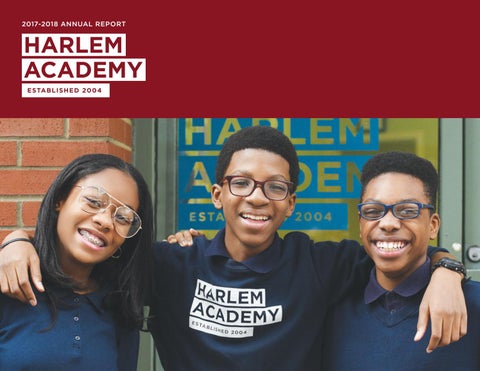 FROM THE HEAD OF SCHOOL

Every year, as we say goodbye to our graduating eighth-graders and welcome a new class of first-graders, I am struck by the common thread that binds them: opportunity. I feel so proud when I think of a student like Tara Eagan from our first graduating class. I think of the way she grew as a scholar, contributed to our school community, and graduated prepared to succeed at a top secondary school and beyond. She went on to thrive at Grace Church and is now showing thoughtful leadership as a junior at the University of Rochester, serving as president of one of the college’s advisory boards, volunteering in the community, and even coming back as a regular volunteer here at Harlem Academy. (Read Tara’s full story on page 6.)

Harlem Academy drives equity of opportunity, guiding promising students to thrive at the highest academic levels and one day make a mark on the world. Tara’s journey illustrates the power of our transformational mission. It goes beyond a single graduate: 88% of her fellow alumni from our first three classes are now making a difference at colleges and universities around the country. Every member of the most recent graduating class matriculated to a competitive, college-prep secondary school. Our current eighth-graders are models for their peers in the way they approach learning and live our school creed. And when I see the joyful enthusiasm of our newest first-graders, I have no doubt that they, too, will shape their own incredible journeys. None of this would be possible without the generous support of our donors and the dedication of everyone in the Harlem Academy family. Thank you for ensuring that Harlem Academy students have the opportunity they need today to become the leaders we all need for tomorrow. Sincerely,

Harlem Academy fills a critical gap in the education landscape for promising, low-income children. Public and charter schools focus on raising low performers to proficiency, while selective programs are inaccessible to children from underserved communities who lack the resources to compete for admission. Harlem Academy serves promising students whose potential might otherwise have gone unrealized. We set tuition on a sliding scale, and no qualified family is turned away for an inability to pay.

OF OUR FAMILIES QUALIFY FOR PUBLIC HOUSING

IN THE COMMUNITIES WE SERVE, ONLY 0.3% OF KINDERGARTNERS HAVE ACCESS TO CITYWIDE G&T PROGRAMS

Tara Eagan, a junior at University of Rochester, is president of the Minority Student Advisory Board.

Student Union’s freshman representative. The next year, she became

make a positive difference at her new home, the University of Rochester.

its president. Now, as a junior, she’s president of the Minority Student Advisory Board, a teaching assistant for one of her classes, and a

Tara came to Harlem Academy with great potential but little

volunteer in the community.

experience grappling with advanced academics. It didn’t take her long to catch on, and by eighth grade she was earning standardized test

“As a freshman, I knew that I wanted to be involved on campus, so I

scores at the 92nd percentile.

hit the ground running,” says Tara. “I have great mentors here – both professors and students – who have guided me.”

However, Tara acquired more than a transformational education during her time with us; she also gained the confidence to be a leader.

She’s doing the same in return, using her many leadership roles as

“There was a lot of room to have a voice at Harlem Academy, and

a means to advocate for and mentor other students. “Being a part of

you need that to be an effective leader,” she says. “If I ever had a

these groups gives me a direct line to school administration, and I

concern, I could talk about it with anyone there and I would be heard.

don’t take that lightly,” says Tara. “Serving as a voice for other students

Harlem Academy taught me that if I speak up, people will take

is an important responsibility.”

what I have to say seriously.” So is helping students benefit from the same opportunities she Tara continued to hone her confidence at Grace Church School,

had. Tara’s volunteerism takes her to local Rochester high schools

but it wasn’t always a smooth road. “When I first went to Grace

where she tutors, mentors, and educates students about her

the other students,” she admits. “I wondered if I belonged there.” “A lot of kids from low-income backgrounds don’t know what’s Tara struggled for several months and then realized she needed help.

available to them,” says Tara, who is considering a career as a college

With support from her advisor, her family, and Harlem Academy, Tara

advisor. “I wouldn’t have known either if not for Harlem Academy.

overcame her insecurities and ultimately thrived at Grace Church.

They opened me up to the world of independent schools and scholarships – a world my parents and I knew nothing about. Harlem

By the time she entered the University of Rochester, she was ready

Academy planted the seed for everything I could do, and I want to be

to make her mark. Her first year on campus, she served as the Black

We are reversing the downward trajectory that often defines the opportunities available to low-income children. Students enter Harlem Academy with median scores in the 74th percentile and earn 16 points of growth by the time they reach eighth grade. Nationally, a promising, low-income student starting first grade at the 72nd percentile (a similar profile to our students) will lose 13 points by eighth grade, dropping to the 59th percentile.

AT HARLEM ACADEMY, WE WERE HELD TO VERY HIGH STANDARDS. THE ACCELERATED CURRICULUM SHAPED MY CRITICAL THINKING. I KNOW I WOULDN’T BE WHERE I AM TODAY WITHOUT HARLEM ACADEMY. WASSA BAGAYOKO ’13 SOPHOMORE AT BROWN UNIVERSITY

Within minutes of visiting Harlem Academy and meeting Head of

compared to typical math programs. Harlem Academy was the first

school in Manhattan to adopt this program and showed double-digit

growth in students’ quantitative reasoning scores in a single year. “It is

of it. “We decided to support the school after that first visit,” says

city. The school is transforming the lives of students at the highest

much as their scholastic achievement.

level of excellence.” “Not only is the academic program at Harlem Academy at the highest Longtime believers in the importance of education, the MacRaes

level, but there is also a tremendously strong emphasis on character

development,” she says. “The four pillars of the school creed –

communities as a way to honor their daughter Catherine, who they lost

initiative, integrity, compassion, and determination – are at the core of

in the World Trade Center attacks. They founded the Cat MacRae

Fund in 2001. Our students know firsthand how much Mrs. MacRae embodies the “Education was always a top priority for Cat, and we wanted to focus

pillars herself. For the past 10 years, she has led lower school trips to

the Metropolitan Museum, where she was a docent for 18 years. “Not

years, I have watched them grow from little first-graders in awe of the

overall commitment – are directed toward Harlem Academy,” he adds.

cavernous museum to confident and proud eighth-graders, ready to take

on the world. The experience has been deeply rewarding for me.”

for underserved children as is available at the best private schools in the city. And it is succeeding amazingly.”

As they think about the future and our students’ place in it, the MacRaes are excited by what’s to come. “Our hope is that they

The MacRaes are especially gratified to see the measurable academic

continue to work hard and excel in a challenging world, incorporating

impact of their generosity. Thanks to their support, Harlem Academy

the four pillars into their everyday lives, and developing their potential

began using the Singapore Math program in 2008, a rigorous and

OF GRADUATES HAVE MATRICULATED TO SELECTIVE SECONDARY SCHOOLS

I STILL THINK ABOUT THE SCHOOL CREED A LOT – ESPECIALLY THE LINE ‘I DON’T GIVE UP’ – BECAUSE IT HELPS KEEP ME ON A PATH TO SUCCESS AS I PURSUE A CAREER IN MEDICINE.

Harlem Academy has closed the college-access gap between our students and high-achieving, wealthier students, with 88% of our graduates entering four-year colleges.

I’M SO GRATEFUL THAT I WENT TO HARLEM ACADEMY. THERE WAS ALWAYS SOMEONE THERE TO SAY, ‘THIS IS POSSIBLE FOR YOU.’ I NEVER WOULD HAVE TAPPED MY FULL POTENTIAL AT ANOTHER SCHOOL. MARIAH BELL ’13, SOPHOMORE AT NEW YORK UNIVERSITY

I am pleased to share Harlem Academyâ&#x20AC;&#x2122;s 2018 Annual Report. Charitable donations provide over 85% of our annual operating budget, ensuring admission for all qualified students regardless of financial background. Thank you for supporting our mission and the transformational opportunity Harlem Academy provides. David B. Peterson Chairman, Board of Trustees

Harlem Academy is grateful to the following donors for helping to ensure our continued steps toward a permanent home and the establishment of an endowment. The commitment and leadership they have shown create a lasting path to success for future generations of promising children. Allen Family Foundation

The Catherine and Joseph Aresty Foundation

Will Bladt and Kate Collins

The Catherine and Joseph Aresty Foundation

The Lori and Mark Fife Foundation

Mr. and Mrs. Scott I. Oakford

SCHOOL CREED I am bold and creative. I take opportunities to lead. I seek help when I need it. I am honest and reflective. I choose to do what is right Even when it is hard or no one is watching. I listen carefully. I speak kindly. I care for my community. I make the most of each day. I learn from my mistakes. I donâ&#x20AC;&#x2122;t give up. 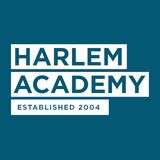